Before the Marvel Cinematic Universe, otherwise known as the MCU, became a thing, Marvel Studios got started with tidy, entertainingly self-contained adventures like Iron Man and, to a much lesser extent, The Incredible Hulk. But things began to change somewhat with the release of Iron Man 2 in 2010, the studio starting to rather obviously be planning something bigger, planting little tidbits of extra information that hinted towards the larger comic book universe everything was building towards. While 2011’s Captain America: The First Avenger and Thor still worked in and of themselves, it was also clear both were engineered to be prequels to 2012’s The Avengers, this massive superhero team-up the end all, be all for the MCU. 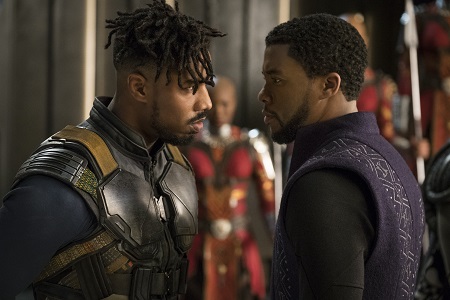 This has been an issue that’s only grown in magnitude and obviousness as the MCU has expanded. While sequels like Iron Man 3 and Captain America: The Winter Soldier have overcome feeling like prequels to a different story audiences haven’t seen yet, other entries into this super-powered universe, efforts like Thor: The Dark World, Avengers: Age of Ultron and Captain America: Civil War, struggled to come across as anything other than vehicles conceived and designed to get all of these characters into one place at the right time for this May’s massive Avengers: Infinity War, none of them working outside of the larger story being told and as such aren’t very entertaining or worth watching more than once.

Not that Marvel hasn’t made some very entertaining movies. Both Guardians of the Galaxy adventures are a heck of a lot of fun, as are Ant-Man, Doctor Strange, Thor: Ragnarok and Spider-Man: Homecoming. But none of them feel as if they are willing to take much in the way of a risk, and while filmmakers like James Gunn and Taika Waititi seem to have had some liberty to make the interstellar exploits of the crew of The Milano and the Nordic wanderings of the God of Thunder their own, it was equally apparent Marvel wasn’t going to allow them stray too far afield in a way that would make getting to Avengers: Infinity War more difficult than it needed to be.

In my opinion this way of doing things has always hampered the films of the MCU to varying degrees, and while some of the entries have flirted with greatness, sadly none of them has ever been able to actually get there. These are nice movies, fun little throwaway larks featuring comic book favorites that are almost all initially enjoyable if also equally frustrating in that almost none are worth returning to for a second look. More, even though each follows a different set of characters with their own unique powers, they all still follow the same template, making being surprised by anything that ends up transpiring at any point during their respective narratives almost impossible.

All of which makes Ryan Coogler’s turn behind the camera captaining one of these MCU installments even more impressive. After making a striking debut with 2013’s based-on-fact, tragically devastating drama Fruitvale Station and following that up with the stunning, Oscar-nominated Rocky spin-off Creed in 2015, the young writer/director was seemingly given the keys to the kingdom by Marvel as it pertained to Black Panther, the studio apparently feeling comfortable to let him do whatever he wanted with this story of an African superhero from the secluded fictionalized nation of Wakanda. He makes a movie that’s unlike anything else in the MCU, and while certain beats and story points follow a traditional pattern, the world Coogler has crafted as well as the people he has constructed to live within it are so uniquely three-dimensional I sat in mesmerized awe for every single second of the film’s briskly paced 134-minute running time. 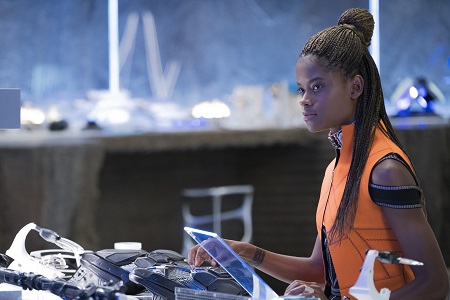 After the death of his father, Prince T’Challa (Chadwick Boseman) returns home to the African nation of Wakanda to be crowned King. He is joined on the trip by his trusted protector Okoye (Danai Gurira) and his nation’s most highly skilled spy Nakia (Lupita Nyong’o), his grieving mother Ramonda (Angela Bassett) and his inventive technological genius sister Shuri (Letitia Wright) eagerly awaiting his return back at the royal palace. Unbeknownst to the majority of the world save for a trusted few, T’Challa is also the Wakandan protector known as the Black Panther, a vibranium-clad hero entrusted to keep his people safe from the prying eyes outsiders.

On a secret mission to capture international arms dealer Ulysses Klaue (Andy Serkis), things go sideways for T’Challa, Okoye and Nakia when CIA analyst Everett K. Ross (Martin Freeman) unexpectedly shows up on the scene at just the wrong time. They get even worse when the mysterious mercenary Erik Killmonger (Michael B. Jordan) becomes involved, his knowledge of Wakanda, its culture and its secrets catching everyone by surprise. Turns out, he also has a claim to the country’s throne, and what he wants to do with it if he is able to snatch it out from underneath T’Challa will have a calamitous impact upon the clueless nations of the Earth.

The basic thrust of Coogler and Joe Robert Cole’s screenplay revolves around a recognizable hero’s journey Joseph Campbell would have been more than pleased with. T’Challa’s quest will be one of success, failure and redemption that will open his eyes to a wider world, helping him understand where his people and his country need to go next in order to continue to thrive and prosper. It’s pretty standard fair, and none of what happens should shock anyone, and while Black Panther isn’t an origin story, there are certainly elements of one planted throughout the motion picture like little hidden Easter Eggs waiting to be discovered.

Thankfully, Coogler and Cole have gone out of their way to make something extraordinary out of these and a handful of additional familiar tropes inherent to the genre. They have made it a point to make these characters fiercely intelligent and more than capable of standing up for themselves no matter their age, gender or life experience. They make decisions that are both good and bad, learning in the process how to stay true to their core beliefs or, if they are unable to do so, pay a steep price for this moral failure. It is a movie that celebrates African culture in manner comic book epics of this size and budget never have before, Coogler presenting a fully realized vision that’s is colorful, dynamic and impressively genuine.

Boseman is outstanding. Jordan crafts arguably the MCU’s most intriguing, angrily heartfelt and tragically multifaceted villain, doing so with a fiery emotional verisimilitude that’s astonishing. Serkis steals scenes left and right, his maniacal exuberance as Klaue downright infectious. As for Freeman, he’s obviously having a befuddled blast as his CIA operative discovers there’s much more to Wakanda than initially meets the eye, his ultimate emergence as a hero as well justifiably worthy of a tiny little cheer of its own. Veteran Forest Whitaker (whose character I won’t go into any detail about whatsoever) and perennial bad-ass Bassett make the most of any moment they happen to be a part of, while rising stars Daniel Kaluuya (an Oscar nominee for 2017’s Get Out) and Winston Duke each get a handful of opportunities to make a lasting impression they’re more than up to the challenge of making the most of. 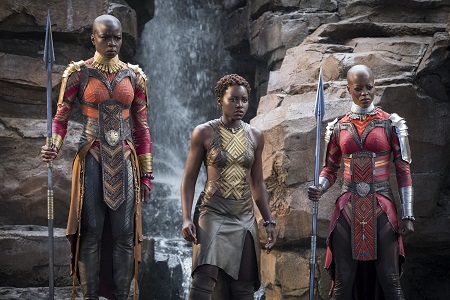 But it is the young women fighting alongside T’Challa who prove to be the most memorable members of this stellar ensemble. Each manages to create unique, captivating characters I found I kept wanting to spend more and more time with, all doing so in their own idiosyncratic way. But while Nyong’o and Wright get the most playfully lively opportunities to charm, it is the fiercely dedicated passion Gurira brings to her portrayal of the warrior Okoye that impressed me the most. She is dazzling, commanding the screen with her intricately nuanced turn and in the process added layers of depth and meaning to the character as well as the to the film as a whole that took my breath away. I was stunned by what she was doing, Gurira deserving of becoming a major international star and here’s my hope that after people see here in this that’s exactly what happens.

Featuring incredible camerawork from Academy Award nominee Rachel Morrison (Mudbound) and gorgeous costumes designed by the great Ruth E. Carter (Selma), the visual aesthetics of all that Coogler has envisioned is of an imaginatively creative scale unlike anything I had anticipated. More than that, though, he and Cole have also manufactured the MCU’s most explicitly political film, the pair’s story talking about issues of race, protectionism, humanitarianism, police brutality, political fascism and immigration policy that comes alive as if it was pulled from today’s most recent headlines. But they do so in a way that never preaches, that isn’t forced but is instead an integral part of T’Challa’s journey to becoming the type of hero his people can be proud of. In the process, Black Panther becomes a movie that grows beyond its comic book roots, Marvel allowing Coogler the freedom to craft a vital, representative, culturally authentic and universally reflective adventure almost certain to be enjoyed, debated and discussed for many years to come. 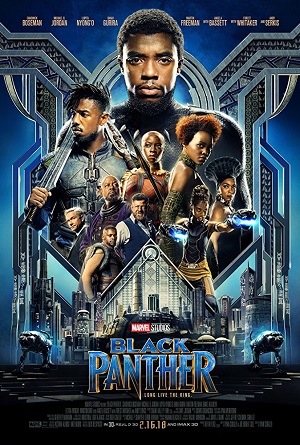