It’s Good to be The Bad Guys

Why? Mr. Wolf bets the professor that, if anyone could show this notorious band of thieves and reprobates the value of going “good,” it would have to be him. But what is initially a ruse to get out of going to prison turns into something else entirely. Maybe being bad isn’t all it’s cracked up to be? Maybe going good is – egad! – the right thing to do?

Based on the popular books by author Aaron Blabey, the new animated comedy The Bad Guys is an awful lot of fun. Inventively animated to mirror the visual stylings of the source material, director Pierre Perifel and screenwriter Etan Cohen (Tropic Thunder) do a bang-up job bringing this rambunctious silliness to life. But it is the vocal talents of Rockwell, Beetz, and Maron who ultimately make all of this worthwhile, the trio giving robust comedic performances that are nothing short of perfect.

It is a small wonder I ended up enjoying all of this as much as I did. The opening bank heist introducing Mr. Wolf and his crew quickly got on my nerves and made me worry the film was going to be a hyperactive chore. The staging is loud, obnoxious, and far too cynically self-aware, and it wasn’t until events slowed down and Mr. Snake and Mr. Shark had their first conversation about sharing a frosty push pop that I began to suspect things may turn out all right.

This is about the point where Rockwell takes over. His smooth delivery and charismatic demeanor are intoxicating. Mr. Wolf makes bad look good and, by the time things accelerate towards their explosive climax, makes good look downright extraordinary. Rockwell adds a hint of sly menace to his performance that’s mixed with a small bit of shocked trepidation, the usually confident thief left psychologically adrift when he realizes doing the right thing offers unanticipated rewards far more valuable than ill-gotten gains locked inside a bank vault.

When the film revels in its easygoing bravado, that is when it is its most effortlessly amusing. There’s an extended gag involving a kitten stuck in a tree and Marmalade tasking this group of thieves to coax it down without tricks, plots, or anything that could be considered as being even somewhat nefarious. I also loved almost all of the conversations between Mr. Wolf and Mr. Snake, the naturalistic cadences of their frequent interactions revealing a lasting, deep-rooted friendship that’s seen its share of ups and downs.

The freneticism of the climax – oddly reminiscent of Disney’s Big Hero 6, only with hordes of rampaging guinea pigs instead of tiny cubes of nanotechnology – is a little obnoxious, but I seriously doubt the intended audience of youngsters is going to mind all that much. Besides, the messaging is sincere and the morals at the heart of the story are undeniably worthwhile. Best of all, Perifel and Cohen deliver it all with stylistic panache, the witty silliness of their scenario and the visual creativity of the finished picture covering up the majority of the film’s flaws.

I have no idea if The Bad Guys will spawn a new series for DreamWorks. In this current marketplace, it’s hard to tell what will click with audiences and what they’ll decide they can skip and wait to watch at home at a later date. But this is the best animated film from the studio since How to Train Your Dragon: The Hidden World, and here’s my hope it does well enough we get to see what sort of antics Mr. Wolf and his crew get up to next. 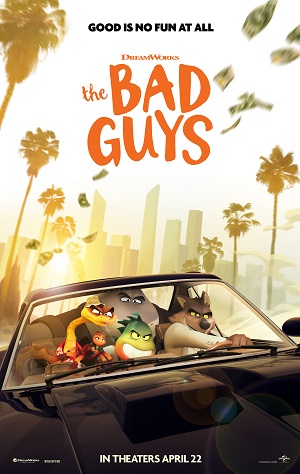