Tess (Georgina Campbell) has traveled to Detroit for a job interview. She arrives at her secluded Airbnb in the middle of the night in a punishing rainstorm — only to discover that the key to the front door is not in the lockbox. Stranger still, the young woman finds an undeniably confused Keith (Bill Skarsgård) is already staying there, and she’s just woken him out of a dead sleep with all her noise.

Turns out, the estate company posted multiple listings for the property and mistakenly rented it to both of them. While Tess is appropriately wary, with few options available (there’s a convention in town and hotel rooms are impossible to find), she agrees to stay, since Keith gallantly offers to spend the night on the couch while she takes the bedroom. While there remains a sense of moderate wariness between them, each wakes up in the morning unharmed.

Don’t know what else I can say about the rambunctiously unsettling horror opus Barbarian from writer-director Zach Cregger (Miss March) as far the plot goes. If I add anything more, there’s a strong chance I could spoil the film’s biggest twist. The same goes if I hint at any similar titles that it reminded me of. Suffice it to say, Cregger has taken an ambitiously grotesque swing for the fences, and while he doesn’t hit a home run, he only barely misses.

What I can say is that Tess’s trip to Detroit will be a memorable one for all the wrong reasons. Invisible dangers lurk in the darkness that she could not imagine, even in the depths of her most disturbing nightmares, let alone existing in the bloodcurdling flesh. This house has a past, and it is violent and it is depraved — and by the time Tess learns the truth, it may already be too late to do anything more than pray she lives to see another dawn.

Does Keith play a part in her macabre discoveries? Or is he an equally innocent bystander? Those are just a few of the questions I refuse to answer. There’s also a popular television actor (Justin Long) who ends up taking part in these murderous shenanigans. But other than disclosing he’s a misogynistic jerk who spends more time moaning about the unfairness of his situation than taking responsibility for his heinous actions, there’s not much I want to reveal about him, either.

What I can disclose is that Cregger valiantly pulls out all the stops. He’s attempting some sort of Jordan Peele meets Bernard Rose descent into human madness, and I feel like he’s trying to say something about economic inequality, race, gender, political inaction, law enforcement, #MeToo, and gentrification. But that may be giving him far too much credit, as his film boldly treads into Alexandre Aja and Fede Alvarez territory with belligerent ferocity. This slowly but surely becomes a violently bloody cartoon of gory excess, escalating to a shockingly goofy conclusion of head-popping psychosis that had me wanting to rise to my feet and let out a hearty cheer of appreciation.

Campbell and Skarsgård are excellent. The entire opening act between the two coyly getting to know one another — with cagey self-awareness of how dangerously absurd their situation could become — is marvelously released. Their dialogue sizzles, each syllable an attempt to figure out their unexpected roommate and to ascertain if they have any reason to be nervous about having inadvertently placed themselves in danger.

Long is also strong, and while he’s played characters similar to AJ, I don’t think he’s ever gone this deep or allowed himself to be this morally compromised. He has a wonderful scene late in the third act in which his perceptive character comes close to finally understanding who he is and taking responsibility for his past. Long plays this moment with nakedly eloquent thoughtfulness, making AJ’s climactic decisions ring with a truthful aura of tragic unpleasantness that would be hysterical — and does elicit a few uncomfortable laughs — if they weren’t so appalling.

Cregger plays on the audience’s emotions as if they were the fiddle and he the maestro confidently plucking the strings. He uses clichés and old-school genre tropes to his advantage, knowing the viewer will be shouting at the screen, pleading that the characters don’t succumb to temptation and do something that’s clearly stupid — even as they visibly squirm in their seats in petrified excitement, coerced into hoping they actually do.

This wouldn’t be possible without the talents of cinematographer Zach Kuperstein (The Eyes of My Mother) and composer Anna Drubich (Werewolves Within). Kuperstein’s increasingly unhinged, discombobulated images are augmented with sinister precision by Drubich’s score. They work in tandem, crafting a delectably ominous synergy between visuals and music that grows in unnerving resonance as events progress. Their contributions cannot be minimized.

Are there elements that do not work? Certainly. The balance between comedy and horror isn’t always on solid footing. Not all of the social commentary is as sharply delivered as Cregger likely intended. The evolution of Long’s character is fairly bumpy, and if he wasn’t so committed to delivering such a richly prickly and greedily uncouth performance it may not have worked at all.

This does not change how monumentally entertaining this tumble into full-throttle terror is. Barbarian is a leap of faith. It lets the viewer in slowly, before trapping them in a damp and dingy bunker of exploitive fright that’s almost impossible to escape. Cregger twists the screws and pulls out all the stops, creating a monstrously smothering hallucination in which humanity and depravity collide to produce unforgettably repugnant results. 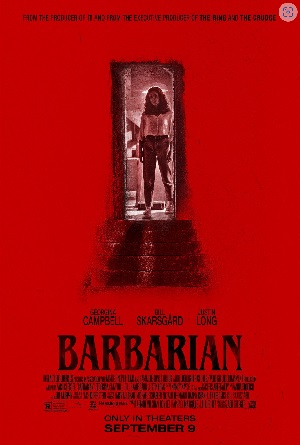