On the Swedish island of Fårö located in the middle of the Baltic Sea, filmmaker couple Chris (Vicky Krieps) and Tony (Tim Roth) have come to stay at the famous home of Ingmar Bergman for the summer. Left to the community as an artists retreat, the two hope to find inspiration for their latest projects while taking in the local sights. They also hope to discover a deeper connection to their favorite director, Bergman’s renowned filmography meaning a great deal to both of them.

There are tales within tales within tales in celebrated writer-director Mia Hansen-Løve’s (Things to Come) latest drama Bergman Island. There are Chris and Tony’s journeys across the island, sometimes together, frequently individually. There are their conversations about one another’s work, most notably Chris’ struggles piecing together her latest script and the intense anxiety she feels trying to come up with a scenario she feels is worthy of her efforts. Finally, there is an almost finished outline for that screenplay, and Chris is compelled to run her ideas past Tony, wanting his opinion if he’s willing to give it.

That third part comes alive with Mia Wasikowska and Anders Danielsen Lie portraying early versions of Amy and Joseph, two former lovers who have come to Fårö to attend the wedding of their mutual friend Nicolette (Clara Strauch). Chris uses them to explore an intense relationship that never had a chance to blossom the first go-around, and one that now faces a mountain of obstacles too massive to overcome here in the pair’s present.

What’s fascinating is that, while decidedly personal, this scenario does not resemble Chris’ current partnership with Tony. They have their struggles, but they also connect with one another so deeply they’re able to find ways to carry on as a loving couple even when their arguments grow too personal to be quickly forgotten. But they also have a daughter, and their passion for one another feels so boundless they’ve learned how to communicate in incomplete sentences without losing track of the point of their conversation.

In Chris’ script, however, Amy is in a supposedly committed relationship with another with whom she has recently had a child. As for Joseph, he’s serious about the new woman in his life, so much so he’s pondering asking her to marry him. Both know their time to be together has come and gone. Yet, whether it is being on the island or because of the happy euphoria generated by the wedding, they still succumb to temptation, never considering until it’s much too late the inner turmoil doing so will inevitably produce.

For Hansen-Løve, this is a delicate little dance deftly analyzing the creative process while at the same time celebrating artists of all types and the influence they have upon others. Whether it be a book written a year ago, a disco song from the 1970s or cinematic gems crafted over the course of six-plus decades, when even one soul is moved or is inspired to create something of their own, each has immense, unimaginable value. While interpretations vary – and they should vary – the art remains, how it is dealt with and deciphered from one generation to the next one piece of a puzzle that will rightfully remain eternally unfinished.

This makes Bergman Island Chris’ story, the way she interacts with Fårö, the inspiration she finds during these summer months and how that ends up being translated into her script is what I believe is the central focus of Hansen-Løve’s film. This makes Krieps, fresh from her spellbinding success in Phantom Thread and Old, the key to this motion picture’s success, and the actress does not disappoint. She is simply marvelous, delivering a superlative performance that’s a continual spontaneous mystery as to what her character will do or say next.

But the rest of the cast is equally up to the challenge. It feels like Roth hasn’t had a part this charismatically captivating in eons, while Lie’s deceptively nuanced turn took me by surprise. It is Wasikowska, however, who manages to deliver the most indelible wallop, her emotive gymnastics during the last act stunning. I honestly feel like she’s one of the more consistently undervalued and underappreciated actors of her generation, her performance here only cementing my opinion.

Hansen-Løve twists things into a circular pretzel during the climax, and I loved seeing how all her seemingly disconnected themes and plot strands suddenly came together with such rhapsodic ease. It’s an open-ended conclusion to the proceedings that feels refreshingly authentic, all of which helps make Bergman Island one of the more ebullient joys I’ve had the pleasure to see this year. 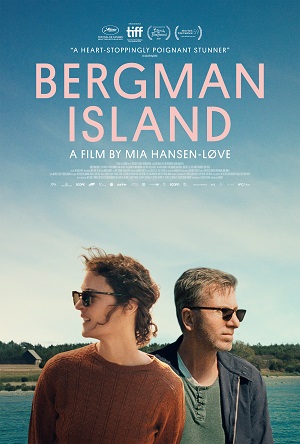