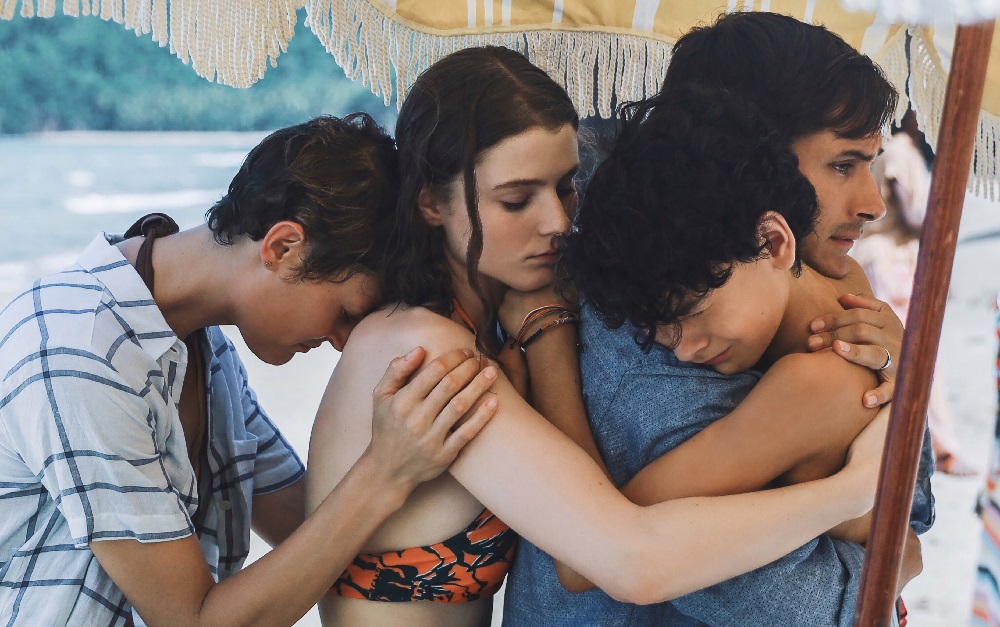 At an exclusive tropical resort, Guy (Gael García Bernal) and Prisca Capa (Vicky Krieps) have come to the island with their 11-year-old daughter Maddox (Alexa Swinton) and six-year-old son Trent (Nolan River) to enjoy what may be their last vacation as a family. To help ease unspoken tensions he immediately takes note of, the resort’s friendly manager (Gustaf Hammarsten) suggests they spend the day at a secluded beach only a precious few are allowed to visit.

This is the rather simple setup to writer-director M. Night Shyamalan’s (The Sixth Sense, Split) unsettling new drama Old. Based on the graphic novel Sandcastle by Pierre-Oscar Lévy and Frederick Peeters, this beach is not what it appears to be. Along with a small group of fellow vacationers, the Capa family finds they are trapped on this pristine sandy sanctuary with no way to leave. Worse, with every passing hour they all age roughly two years. If they don’t find an escape route soon, all of them, including the children, will die of old age.

It’s a chilling concept worthy of a classic Twilight Zone episode, and Shyamalan goes out of his way to make things as strange and as disquieting as possible. His dialogue is as stilted and as mannered as ever, characters speaking in halting, metronomic cadences that only make this aura of uncertainty all the more impenetrable. The director also instructs gifted cinematographer Mike Gioulakis (It Follows) to shoot things in a muddy, hazily disjointed manner that’s hypnotically off-putting, a surrealistic touch I found fascinating.

Unsurprisingly, it’s likely Shyamalan’s latest will be the love-it-or-hate-it film of the summer. Once again, the idiosyncratic filmmaker steps up to the plate and takes several mighty swings. For my money I find that he connects more often than he misses, and while Shyamalan doesn’t send any of the pitches out of the park, the steady diet of singles and doubles is more than enough to secure a lopsided win.

This meditation on life, family, marriage, memory, parenthood, love and, yes, aging frequently goes for broke. It is harsh and uncaring. It is tender and intimate. It is timid and insecure. It is courageous and selfless. Each moment leads to a fresh realization for Guy and Prisca, the estranged couple reconnecting to one another in the face of something beyond rational comprehension, and doing so in such an intimately touching way I couldn’t help but be moved while watching their Sisyphean ordeal reach its inevitable conclusion.

There are some wonderful supporting turns from Rufus Sewell, Nikki Amuka-Bird, Abbey Lee, Eliza Scanlen and especially Ken Leung, but I’m not going to talk about their characters, since learning who they are and why they are on the beach with the Capas is all part of the byzantine mystery. I will say that Scanlen is the focal point during one of the film’s most terrifying moments which involves her and costar Alex Wolff. It’s an unhinged, distastefully heartbreaking sequence, and I imagine as many viewers will turn away in disgust as those who decide they’re all in for whatever Shyamalan has up his sleeve next.

Jojo Rabbit and Leave No Trace star Thomasin McKenzie continues to impress. She portrays Maddox at roughly 16 or so years of age even though she’s still the same 11-year-old child who stepped onto the beach with her parents. I loved the way she fidgets, how she shows such physical uncertainty as she attempts to navigate the passing hours in a body she no longer recognizes and that refuses to stop changing. McKenzie has this astonishing, virtually silent moment after Maddox learns a devastating truth about her parents, and seeing her mournfully wander out into the crashing surf to try and regain her composure is a thing of ethereally haunting beauty.

I do not know if Shyamalan earns his climax. I’m still trying to figure out if I feel like enough of the various pieces he uses to complete his puzzle fit together as nicely as I’m sure he intended them to. But Old says something about life that’s as profound as it is frightening, and the nebulous, beauteously unfathomable peculiarities a human life is born to navigate from first breath to last are ambitiously displayed in all their monstrous ambiguity. 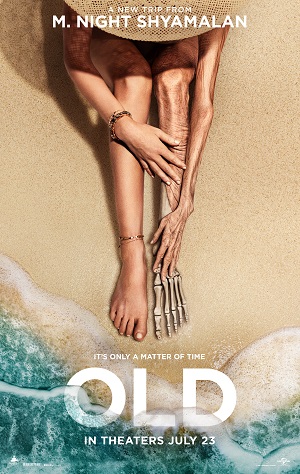