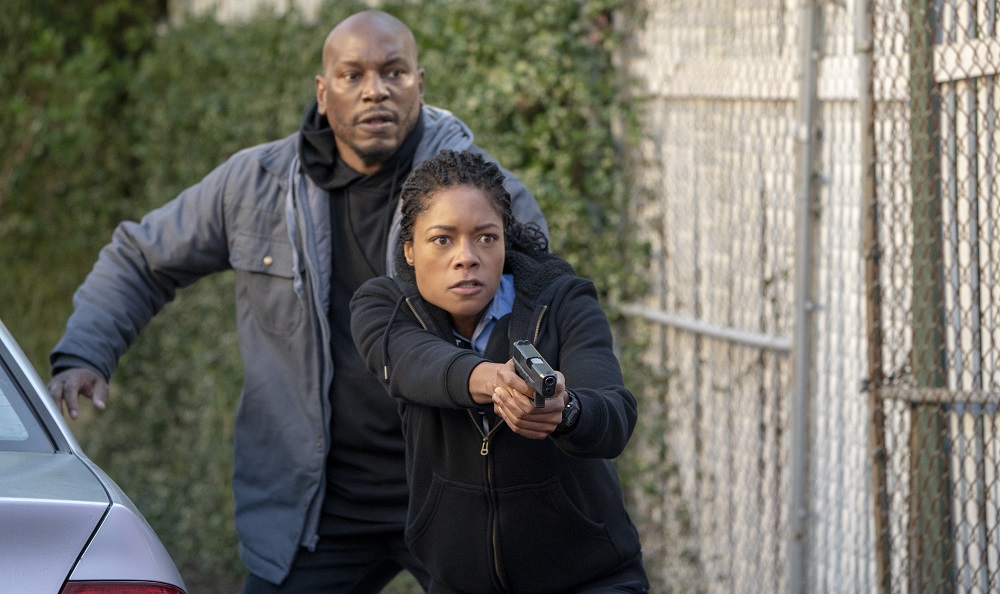 I wish I liked Black and Blue more. There’s plenty about this gritty urban thriller I enjoyed, most notably star Naomie Harris’ resolute, emotionally three-dimensional performance as a rookie New Orleans police officer placed in a seemingly impossible survival situation after she records the unthinkable on her body camera. I also appreciate that director Deon Taylor (The Intruder) cast Tyrese Gibson against type and asked him to eschew the standard tough guy demeanor audiences are used to seeing from him and instead expose himself raw in a manner that’s heartfelt and affectingly genuine.

But Peter A. Dowling’s (Sacrifice) script is oddly convoluted, absurdly melodramatic and annoying didactic for the movie to live up to its inherent potential. Some of the dialogue is unintentionally hilarious, and as great as both Harris and Gibson are sometimes the most impressive facet of their performances are the pair’s incredible ability to say some of these lines with determined conviction while maintaining a straight face. It doesn’t help that Taylor directs with such a stern solemnity that it almost feels as if his film is more interested in preaching to the audience about modern urban society’s ills than he is in trying to entertain them while also delivering a little timely social commentary at the same time. Black and Blue comes off as much too heavy-handed, especially during its last third, sapping the life out of the narrative which makes watching until the end far more difficult than it otherwise should have been.

After leaving town as a timid 17-year-old, after a decade away Alicia West (Harris) has returned home as a battle-hardened Afghan War veteran determined to make a difference in her former community as a New Orleans police officer. Only three-weeks on the job, paired with a pessimistic, if still good-natured partner (Reid Scott), the young woman wants to make to put a positive face on law enforcement. But a last-second overtime shift goes haywire when she records veteran narcotics detective Terry Malone (Frank Grillo) executing local drug dealers to coverup his corruption on her body camera. Wounded, unarmed and on the run looking for help from a neighborhood that sees her a traitor, West doesn’t know where to turn and she has no idea which of her fellow officers she can trust. Eventually she asks former high school classmate Milo ‘Mouse’ Jackson (Gibson) to hide her out until she can find a way to get back to the precinct and upload the footage on her camera into the department’s database, the timid convenience store clerk understandably reluctant to offer his assistance.

It’s not a complicated premise, and how Taylor and Dowling dive head-first into this demoralizing quagmire of corruption, poverty and murder is undeniably effective. The opening showing West out on the job and being shocked by how different her hometown has become post-Hurricane Katrina is suitably gut-wrenching, while her initial encounter with Malone and his men, as well as her subsequent escape into the surrounding neighborhood searching for help, is handled quite well. I also liked the subtle, almost gender-flipped give-and-take between Harris and Gibson, the delicate evolution of their relationship developed nicely thanks to the pair’s performances as well as Taylor’s confident handling of the material as it relates to both of them. Finally, veteran Dante Spinotti’s (L.A. Confidential, The Last of the Mohicans) cinematography is dazzling, the kinetic grace of his camera movements creating a visually visceral allure I was unquestionably drawn to.

All of which makes my indifference to the movie as a whole understandably frustrating. Dowling’s script revels in doling out platitudes and clichés in order to give itself additional narrative heft. This undercuts any chance for even the more laudable bits of social commentary lurking underneath the thriller’s surface to take proper hold. Instead, these “be the change” outbursts become unintentionally hilarious, especially during the film’s climactic stretch. Characters stop acting like real people and instead fit archetypes and tropes more suited to a B-grade straight-to-video (or, in this day and age, straight-to-streaming) throwaway actioner than they do anything else.

After The Intruder and now this, I can’t deny that Taylor has technical skills or that he has a solid hand where it comes to working with his actors. I also like that he is attempting to take a lot of standard cinematic conventions as they apply to racial minorities as depicted in these sorts of pulp thrillers and throw them on their head. But I also feel like Taylor’s much too keen on delivering a cheap shock or a hokey burst of melodrama as his films conclude than he is in maintaining that sense of cultural authenticity he exerted so much effort to initially create.

While Black and Blue works start to finish far better than that Dennis Quaid/Michael Ealy effort released back in May did, that does not mean these items I’ve outlined weren’t critical issues for me. I’m possibly even more disappointed this time around than I was after watching The Intruder. Wasting wonderful performances from Harris and Gibson (who I don’t think has ever been better) is one thing, but destabilizing any chance I could maintain my emotional investment in what was happening with so much goofy pabulum and numerous superciliously insincere twists and turns was more than I could stand. I walked out of the promo screening a little angry, disappointed that Taylor’s latest never lived up to the potential it so deftly showcased for much of its 108-minute running time. While my vitriol is somewhat tempered thanks to all of the aspects of the film I did enjoy, that isn’t anywhere near enough for me to be able to recommend paying hard-earned dollars to see this one in a theatre. 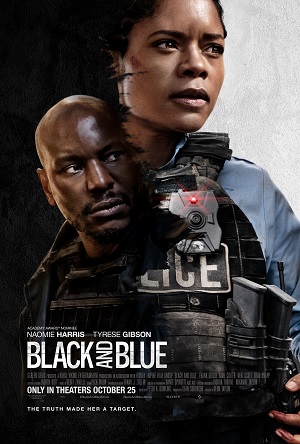