Brittany Runs a Marathon is superb. A soaring testament to the human spirit, the film is an entertaining cathartic joy that never shies away from the darker emotional complications that can arise when a person sets out try and better themselves and live a healthier life. But in showcasing unvarnished truths for what they are, this drama becomes even more inspiring in the process. The feature debut for writer/director Paul Downs Colaizzo, this magnificent little drama was one of the best motion pictures I had the pleasure to watch during this past summer’s Seattle International Film Festival. It also just so happens to be one of the best I’ve also seen this year.

Brittany Forgler (Jillian Bell) is 27, unmarried, unmotivated, barely employed, drinks too much and frequently enters into relationships that could easily be described as being “toxic.” She’s even not above heading to a random doctor complaining of vague illnesses in hopes of scoring a prescription for Adderall. But when Brittany’s latest medical foil proves difficult to fool she is instead left with some fairly devastating news as far as his diagnosis of her current health is concerned. He states in no uncertain terms that if she doesn’t clean up her act the young woman will be dealing with real problems and not imaginative ones, and instead of giving her a prescription he advises a change in diet and at least some vague attempts at exercise before it’s too late.

From there things move in a variety of character-driven directions that, if not entirely surprising, are still endearingly absorbing thanks to their blunt authenticity. Unable to afford a gym membership, urged on by the cranky photographer, Catherine (Michaela Watkins), who has a studio in her apartment building to try and run a single block and see how it goes, Brittany puts one foot in front of the other and makes a valiant attempt to get in shape. This causes inadvertent friction with her roommate Gretchen (Alice Lee), leads to an unexpected friendship with fellow newbie runner Seth (Micah Stock) and a potential romance with slacker house-sitting dreamer Jern (Utkarsh Ambudkar). It also causes unforeseen complexities, some of them good, some of them bad, most of them sitting in a nebulous moralistic grey area where “good” and “bad” have no meaning, with her beloved brother-in-law Demetrius (Lil Rel Howery), and as he basically raised the young woman after a childhood tragedy he sees the plusses and minuses of her newfound zeal to better herself far more clearly than she can for herself.

I like that Brittany doesn’t become a saint once she decides running is for her. I like that the movie isn’t obsessed with her professed goal of completing the New York Marathon. Most of all, I like that Colaizzo makes his main character’s journey more about the life lessons she is forced to absorb as she slowly gets in shape than it is in being some generic inspirational comedic-drama about an underdog overcoming impossible odds. Because the filmmaker looks at this woman’s life warts and all, because he refuses to apologize for her when she does or says something despicable, the director’s picture achieves a deeply affecting resonance that’s far more long-lasting and even more profound.

While the entire ensemble is terrific, especially a sneaky-great Watkins who has far more to do as Catherine than initially meets the eye, Bell is the one who makes this film marvelous. This is the Sword of Trust, 21 Jump Street and Inherent Vice actress’ finest hour. Bell inhabits Brittany body and soul, refusing to hold anything back as her character attempts to reach her goal and realize the task she has set for herself to accomplish. She doesn’t shirk from the growing egotism that’s bubbling inside of the amateur runner as the former party girl inadvertently trades one sort of vice for another. Brittany becomes increasingly judgmental of others as her health improves and Bell doesn’t sugarcoat the innate ugliness of this part of her transformation.

This is a good thing. A person’s life isn’t just one thing. Their personality doesn’t only have a handful of components. More importantly, how we look at ourselves in the mirror, how we assess the lives we have led, all of that plays a part in the mystery of our individual progressions from childhood to our eventual status as an adult. That Brittany is finally able to do this with such stark lucidity, that she starts listening to what others are telling her on a personal basis instead of a superficial one, that is the real victory of her story, and whether or not she is able to run the New York Marathon to completion becomes minor in comparison to her being able to do complete all of that.

Colaizzo based his screenplay on his real friend and roommate, a young woman who came home one day stating she was going to change her life, started jogging and eventually ran the New York Marathon. But that is only the jumping-off point for what the filmmaker has accomplished with this little miracle of a motion picture. The redemptive clarity of Brittany Runs a Marathon is pure and refreshing, its understanding of people in personal crisis learning to take responsibility for their actions even more so. Colaizzo’s debut crosses the finish line able to raise both its arms in victorious celebration, this audience-friendly treat an instant triumph worthy of a standing ovation. 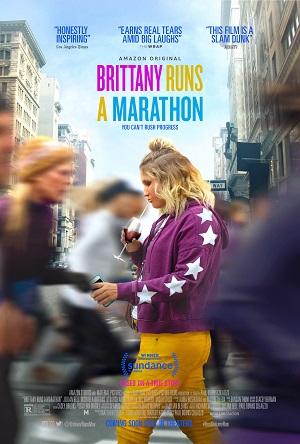