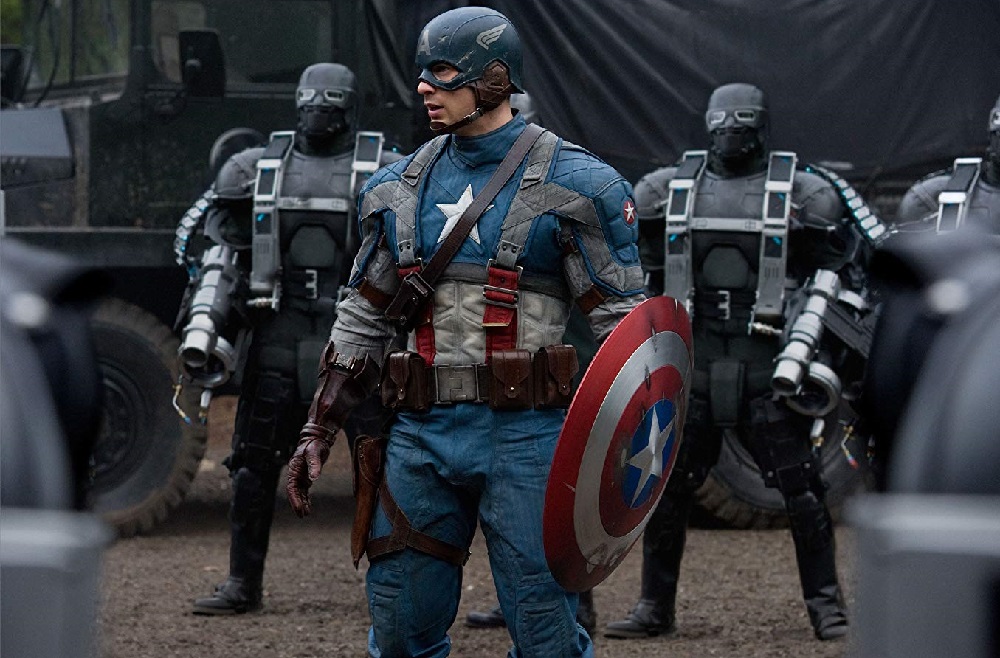 Primarily set in the waning days of WWII, Marvel’s Captain America: The First Avenger is the best film the studio has made as part of this ongoing comic book franchise all of which have been leading up to next May’s The Avengers. Better than either Iron Man flick. Better than The Incredible Hulk. Heck, it’s even better than Thor, a movie I came away overjoyed with just two short months ago. Director Joe Johnston (The Wolfman) and screenwriters Christopher Markus and Stephen McFeely (You Kill Me) have done a splendid job bringing this star-spangled superhero to life, delivering an entertaining high-flying frolic that held me merrily spellbound for most of its 124-minute running time.

Steve Rogers (Chris Evans) is a 98-pound scrub from Brooklyn who wants to go fight Nazis. He’s asthmatic. Has multiple health issues. Can barely do a single push-up. But he also has the heart of a lion, refuses to back down, uses his brains over his underdeveloped brawn and wants to fight for his country, not to kill, but because it’s the right thing to do.

Enter government scientist Dr. Abraham Erskine (Stanley Tucci). He’s impressed with Rogers’ fortitude and spirit, sees something that could make him ideal for a project he’s been working on. Even though the Colonel in charge, the iron-willed Chester Phillips (Tommy Lee Jones), doesn’t agree with the choice, even though British secret agent Peggy Carter (Hayley Atwell) is for some strange reasons worried for the young wannabe soldier’s wellbeing, Erskine knows he’s picked the right man and is certain Rogers is the one who will do his experimental ideas justice.

He’s right, of course, mainly because if he wasn’t decades of Marvel comic book lore would have to be thrown out the window. Even so, who’d have thought an old school, unabashedly patriotic (some might even say jingoistic) action film would be quite this wonderful? It’s like an Indiana Jones escapade but with a shield-throwing superhero clad in red, white and blue at its center instead of a fedora-wearing archeologist. It’s like Guns of Navarone or Where Eagles Dare but in this instance focused on a genetically engineered ‘super soldier’ instead of a team of hardened roughnecks led by the likes of Gregory Peck, Richard Burton or Clint Eastwood.

That’s great as far as I’m concerned, Johnston delivering on the promise hinted at in The Rocketeer and nearly realized with October Sky with his handling of this comic book adventure. He’s crafted a retro 1940s-style WWII potboiler colored with the pyrotechnic razzle-dazzle of the 21st century. He’s captured an ethos and a style few modern filmmakers have been able to rekindle (Steven Spielberg and Raiders of the Lost Ark notwithstanding) and done so in a way that’s so appealing it would take a hardened heart made out of stone to not be moved by even a single solitary second of it.

Like most comic book movies, things can get a little silly, and for as much as actor Hugo Weaving throws all of himself into making central baddie Johann Schmidt a.k.a. ‘The Red Skull’ a memorably villainous presence, the script never gives him enough to do to make this German as formidable an opponent as say Loki was in Thor or Dr. Octopus was in Spider-Man 2. I’ll also say the present day bookends aren’t great, both only reminding the audience that, as enjoyable as what they’ve been watching might be, the whole thing has really been nothing more than a feature-length commercial for next summer’s The Avengers.

But so what? Captain America: The First Avenger gets the job done. Evans is perfect as the stalwart hero, Tucci steals the show during the first half and the luminous Atwell is a total delight as Peggy Carter. Johnston paces things nicely, stripping the fat away from the narrative’s bones and assembling a joyfully crisp thrill ride that holds more than its fair share of surprises. The movie is an engaging sensation I didn’t want to end, and when the Avengers do assemble next year, here’s hoping their initial adventure is half as thrilling a spectacle as this one is. 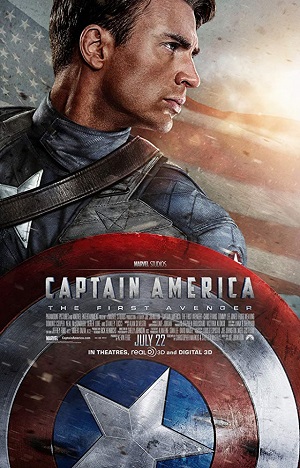