Say what you will about Academy Award-winning director Tom Hooper’s (The King’s Speech, Les Misérables) adaptation of Andrew Lloyd Webber’s Broadway musical smash Cats just know that it is undeniably ambitious; whether that’s a good thing or not is another question entirely. A star-studded spectacle where the cast is digitally transformed via state-of-the-art motion capture visual effects into anthropomorphized fur-covered Barbie Doll-like felines with human feet, hands and faces, this is one of the more unusual, and sometimes unintentionally unsettling, motion picture experiences I’ve had in quite some time. Make no mistake, Cats is unforgettable, the sad part is that’s frequently for all the wrong reasons.

I have no idea what the actual plot is as coherence is not this film’s strong suit. Having never seen the musical (although, like so many others, very familiar with the music, especially “Memory”), I can only imagine Webber came up with this bizarre flight of wackiness while he was high as a kite reading a collection of poems by T.S. Eliot. If that wasn’t the case, forgive me if it still feels that way. As for that story, it seems to involve an abandoned kitten named Victoria (Francesca Hayward) who ends up making friends (at least I think they become her friends; I’m still honestly not sure) with a bunch of alley cats on the night of something called the “Jellicle Ball” where the revered Old Deuteronomy (Judi Dench) will select one worthy feline to ascend to the “Heaviside Layer” so that they can be reborn to a new life. A bunch of singing, dancing and surrealistic craziness ensue.

One of the most popular Broadway productions of all-time, instead of practical sets and makeup (which would echo the stage production) Hooper tasks his visual effects artists to transform his cast into these odd, apparently sexless cat people. He creates a psychedelic series of sets that are a mixture of practical and digital, giving his film a cartoonish sheen that makes it often look like an animated musical instead of a live-action one. The director strikes an unbalanced tone the wavers between states of wacky and serious and depressive and euphoric with almost no concept of how these various emotional states of being should connect one to the other. In short, it’s a lot to take in.

Hooper has stacked his cast with a number of talented performers, there’s no question about that. Problem is, only a scant few of them are able to rise above the visual chaos to actually deliver an engaging performance. Newcomer Hayward is a London Royal Ballet Principal Dancer and she is certainly memorably charismatic as Victoria. Dench dives all-in as the wise Old Deuteronomy, and I found her eccentric star turn continually fascinating even if I didn’t have the first clue as to what it was she was trying to do or what emotion she was attempting to convey. There’s also some nice work from Laurie Davidson as the “magical cat” Mr. Mistoffelees and 2015 An American in Paris Tony-nominee Robbie Fairchild as mischievous storyteller Munkustrap, while Ian McKellen has a lovely moment as Gus The Theatre Cat I liked a whole heck of a lot. As for Oscar-winner Jennifer Hudson as the tragic Grizabella, her performance during the last act of is nothing less than magnificent, and if I’m being honest my opinion of the film as a whole substantially improved all thanks to her.

But not enough that I can recommend anyone go and watch this one. This is a phantasmagoric train wreck that aims high even though it continually keeps missing the target. Cinematographer Christopher Ross’ (Yesterday) camera never stops moving, making watching the talented dancers strut their stuff (including anytime the dynamic Hayward and Fairchild join forces) challenging. The rigor of navigating the hallucinogenic chaos is made all the more difficult courtesy of Melanie Oliver’s (Anna Karenina) frenetic editing, Hooper having his technical team create a sensation of visual hyperbole that comes perilously close to off-putting.

There is the continual sensation that the visual effects have been left unfinished. As incredible (if still creepy) as the human-cat hybrids might look (That hair! Those ears! The tails! The twang of each individual cat’s whiskers!), the backgrounds are like something out of the early 2000s circa George Lucas’ Star Wars prequels. The effects on the secondary creatures (which includes tap dancing cockroaches and tiny singing mice, the latter of which appear to be portrayed by wide-eyed terrified children) are ungainly and look rather terrible.

Then there are the unanswered questions that pop up throughout. When do these cats wear clothes? When do they not wear clothes? Why do some wear shoes and others do not? What’s with the way the sets sometimes seem human-sized and then seconds later look cat-sized? Why do they all want to go to the Heaviside Layer so bad? Doesn’t that just mean they’re being sent off to die? What is it, exactly, that Idris Elba (as the wicked and selfish Macavity) is doing in this movie and why do I find it so uncomfortably unappealing? These are just a few of the items I keep pondering to no avail, that last question may be the most vexing of them all. As for supporting turns from Rebel Wilson (looking bored), Taylor Swift (barely in it but suitably vampish) and James Corden (insufferably obnoxious), there’s not a lot to say, and I can’t say any of them make much of a lasting impression.

Things do start to become more tolerable when Dench shows up about halfway through, the unhinged freneticism of the cinematography and editing dialed down at least a tiny bit as soon as Old Deuteronomy starts the process of making her pick of who to send to the Heaviside Layer. As for the climactic sequence featuring Hudson, it’s magnificent, her ability to convey a mixture of melancholy, rage, regret, sadness, conviction and pain while singing the heck out of this production’s most famous song extraordinary. Cats might be a mess, but it’s a one-of-a-kind incredibly memorable mess (for better and for worse), and for all I know that’s entirely by design. 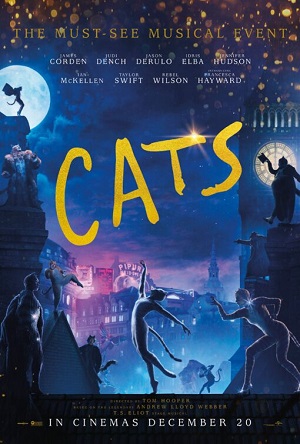