The premise of Yesterday is that, for some strange reason with no explanation whatsoever, a worldwide electrical blackout causes the entire catalog of John Lennon, Paul McCartney, George Harrison and Ringo Star, a.k.a. The Beatles, to vanish from existence with one man, a struggling singer/songwriter named Jack Malick (Himesh Patel), the only person who remembers either them or their music. He proceeds to pass off their songs as his own and becomes an overnight sensation who catches the ear of Ed Sheeran and gets signed to a major label recording contract by cutthroat music producer Debra Hammer (Kate McKinnon). Along the way he is estranged from his longtime manager and childhood best friend Ellie Appleton (Lily James), not realizing until it’s almost too late that his feeling for her go way beyond the strictly platonic.

That’s it. That’s the movie, and as intriguing an idea as that might be, I’m not at all certain that Four Weddings and a Funeral and Notting Hill screenwriter and Love Actually and About Time writer/director Richard Curtis is the guy to pull a conceit like this one off. Working from a story he originally conceived with Jack Barth and handing the directorial reins over to Slumdog Millionaire, 28 Days Later and Trainspotting filmmaker Danny Boyle, the scenario he’s composed never strays too far away from the readily anticipated. His tale is perfectly content to be a moderately pleasing, overtly melodramatic what-if curio piece that places more emphasis on the potential romantic longings of its two leads than it does anything else. As enjoyable as the movie can be it oddly flatlines right at the moment it should be building to a knockout crescendo, and I found its climactic choruses strangely forgettable and not at all worth humming as I exited the theatre.

The weird thing is that Boyle and Curtis don’t do a particularly good job of making it clear just exactly why The Beatles entire catalog would resonate so instantaneously with a modern audience. I totally get why a songwriter like Sheeran would be blown away by something like “The Long and Winding Road” or “Let It Be.” Those are exquisitely constructed songs with superior lyrics that have stood the test of time for a reason. But I honestly don’t get why something like “Back in the U.S.S.R.” would be a universal smash outside of Russia, or how “I Want To Hold Your Hand” or “I Saw Her Standing There” wouldn’t sound anything other than slightly archaic in the 2010s no matter how passionately they were being performed. On top of that, a key component to The Beatles success were the crafty, pitch-perfect harmonies that Lennon and McCartney so often manufactured for their band to perform, an aspect of their musicianship that is lost when it’s just one man up on the stage performing on his own.

Still, there is an incontestable charm in watching Jack figure out how to use the band’s music to his advantage. He’s such a nice guy, so unassuming and selfless, the idea that he is going to go through with passing off someone else’s work as his own even though for all intents and purposes none of their art existed in the first place so alien to him he’s instantly aghast that he’s even contemplating doing it. But when he sees the response from Ellie and his friends when he first sits down and starts singing the title track, when Ed Sheeran shows up at his family’s door asking him to go tour a few Russian clubs with him after hearing a couple songs, Jack almost can’t help himself. The singer is faced with an existential crisis that offers up a number of moral and ethical questions, the weight falling upon his shoulders as his ruse continues building exponentially at virtually the same rate as his fame also grows.

Not that Curtis seems to be concerned with almost any of that. His script reduces all of these ideas to easily digestible platitudes that basically culminate by saying, “love is all you need,” and little else. But that paraphrasing of The Beatles is reductive and rudimentary, adding a layer of melodramatic schmaltz to their music that, no matter how emotional many of their songs might have been, was arguably never there until now. Worse, his depiction of Ellie and her feelings for Jack often feel as if they are from another era entirely, and while I’m all for stories that explore how someone’s feelings of love and affection are not always reciprocated as one hopes they would be, her character would be more at home in an Andy Hardy vehicle than it is in one set in 2019.

Thankfully James is far too talented an actress to make Ellie anything other than supremely likable, the more odious aspects of her situation having nothing to do with her. The Cinderella and Mamma Mia! Here We Go Again star has an enchantingly innate ability to warm even the hardest heart to its melting point, the quiver of her lip coupled with the alluringly crooked nature of her smile positively infectious in the best possible way. She has melodious chemistry with Patel, and in a movie without near as many issues I’m certain I’d be sitting here singing their mutual praises as boisterously as I possibly could if that were not the case.

That’s not going to happen. Boyle is a great filmmaker who is hardly afraid of sentiment (just watch his magnificent family drama Millions), but even in his lesser efforts like Trance or The Beach his imprint upon the material is always noticeable. But that’s not how it is with Yesterday, and if you had told me Curtis had directed this and was just utilizing Boyle’s name as a pseudonym I’d be hard-pressed to find any reasons to say you were wrong. The last third of this drama is an ineffectual slog that wastes the talents of its stars, and as breezy, inoffensively enjoyable and as adorably light as so much of this was to suddenly hear it hit so many sour notes was undeniably disappointing, my emotions gently weeping the more I keep thinking about it. 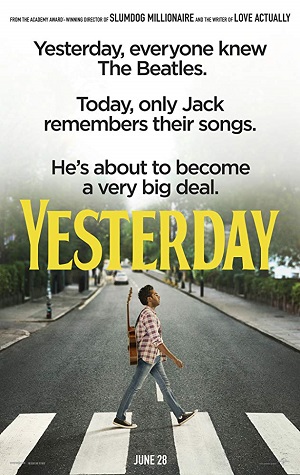