When Becky (Dreama Walker) walked into work she thought the biggest issue was going to be that someone left the freezer open the night before leading to a bacon and pickle shortage. But when her manager Sandra (Ann Dowd) asks her to come back into the office and hands her the phone, she’s shocked to discover a voice claiming to be a police officer (Pat Healy) informing her she’s a suspect in a local robbery.

What happens next is one of the more shockingly disturbing stories of abuse that I’ve ever heard. Through it all I almost couldn’t help from yelling back at the screen, shouting at the characters for being so obviously stupid, for doing things so beyond the pale they should have known immediately something fishy was going on. And yet, the way this voice presents its case, the smooth way he goes from step one to step two to step three, all of it forced me to wonder if I could have been taken in just as easily as Sandra and to a lesser extent Becky, that thought chilling enough to make me sick to my stomach and eager to take a shower the moment the film concluded.

That is the genius of writer/director Craig Zobel’s (Great World of Sound) based-on-fact drama Compliance. Not so much a thriller yet as terrifying as anything I’ve seen this year, definitely not a horror movie but so insidiously scary the chances I’ll be able to stop thinking about it hover around zero, this is one fantastic motion picture. It took me places I did not want to go, got me in a mindset so infuriating I was angry at myself for thinking the thoughts I was. It’s bravura filmmaking, and without question this is one of the finest features I’ll likely see in all of 2012.

Not that I have any wish to watch it again anytime soon. Much like Cristian Mungiu’s 4 Months, 3 Weeks and 2 Days, this is an unsettling, dirty and upsetting piece of a cinema. It is a movie that got so thoroughly under my skin I wanted to take sandpaper and scrape its residue away, the bloody mess that would have been left behind more appealing than the residue of cruelty I could still feel permeating every cell. There is no sweetness and light, no happy ending, and even though punishment is enacted and apologies are made none of this can erase the pure, unadulterated evil of the grotesque events that that end up transpiring.

This is not meant as an indictment against the film. I’m just expressing my immediate sentiments as to how I immediately reacted after watching it. I’ve said on numerous occasions that I feel Mungiu’s aforementioned Romanian abortion drama is a masterpiece but that I’d never watch it again willingly, and yet, just the other day, I found myself drawn to the DVD and took another look at it for the first time since 2007. I was surprised by the effect it still has on me, shocked to discover I was just as captivated by it on re-watch as I was back during that initial viewing. But the chief revelation? That I could indeed view it again without going insane, and not that I needed any proof this still reminded me once again that a great film is a great film is a great film, and no matter how unsettling or distasteful the subject matter that maxim holds true no matter what.

Compliance is a great film, maybe even as masterful of one as Mungiu’s enduring drama has proven to be. Superbly acted by its relatively unknown stars, staggering well shot by Adam Stone (Take Shelter) and immaculately edited by Jane Rizzo (Great World of Sound), all the pieces of this puzzle fit together magnificently. As ill as the scenria made me, even though I felt at war with myself over the actions of the characters, I couldn’t have left my seat even had I wanted to try. Zobel’s latest is continually astonishing, something I’m certain will be verified when I do ultimately sit down to watch again, even if it does take me a few years to rustle up the courage to do so. 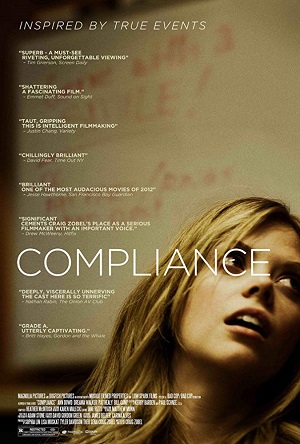