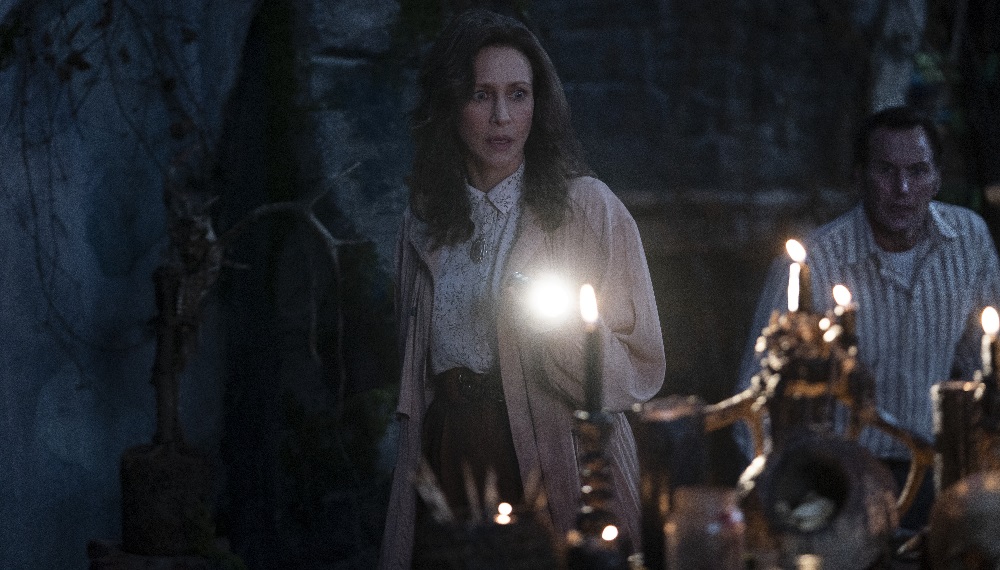 “I think I hurt someone.”

Here’s what I wrote about The Conjuring: The Devil Made Me Do It back in June:

“It is 1981. Ed (Patrick Wilson) and Lorraine Warren (Vera Farmiga) have been brought in to assist in the exorcism of a young boy, David Glatzel (Julian Hilliard). When things go horrifically awry, family friend Arne Cheyenne Johnson (Ruairi O’Connor) steps in to save the child’s life, not realizing his actions will have tragic consequences in the near future.

Time passes. Arne is on the verge of proposing to David’s older sister Debbie (Sarah Catherine Hook). But strange things are happening. The young man isn’t himself, brutally killing a man with a knife almost as if he were possessed. Debbie begs the Warrens to help prove Arne’s innocence, and during their subsequent investigation, they uncover a monstrous evil unlike any they’ve encountered before.

Like the previous two motion pictures featuring the exploits of the Warrens, The Conjuring: The Devil Made Me Do It is loosely based on a true story, in this case the first time “demonic possession” was utilized as a defense in a murder trial. Unlike either 2013’s The Conjuring or 2016’s The Conjuring 2, this third chapter in the couple’s series is not directed by James Wan. Instead, The Curse of La Llorona filmmaker Michael Chaves takes the reins, and the change behind the camera is unfortunately all-too-noticeable.

This is not to say Chaves is solely responsible for this sequel’s missteps. Working from a story he conceived with Wan, David Leslie Johnson-McGoldrick’s (Red Riding Hood, Aquaman) anemic screenplay is shockingly forgettable. There’s nothing that stands out about this latest installment in the ever-expanding Conjuring universe. Other than Ed and Lorraine, the characters are underdeveloped and difficult to care about.

Then there is the core mystery driving the plot. It’s far too familiar and more than a little half-baked. There is a constant sense this sequel is going through the motions more than it is genuinely trying to thrill an eager audience ready to be communally scared. Its best pieces of visual imagery are borrowed from other, and better, motion pictures, including The Exorcist, and the filmmakers rarely do anything that comes across as being even moderately inventive or creatively inspired.

What this sequel does have going for it are Wilson and Farmiga. They have grown into these characters nicely over the past eight years, and it’s great to see that their affinity for Ed and Lorraine hasn’t diminished a single bit. The love these two characters feel for one another remains palpable. Because of that, the film is built upon a solid emotional foundation. Farmiga is particularly good, and she has a couple of outstanding moments where Lorraine’s psychic abilities are key to solving an unsolved missing-person case that may be tangentially connected to what’s happening to Arne.

The other major asset here is the return of Joseph Bishara. This makes six films he’s handled scoring duties for in the Conjuring universe, including all three of the Warren entries, and not once has the composer phoned things in. His compositions add a jolting layer of disquieting eeriness that would not exist otherwise. Bishara is the inarguable MVP as far as I’m concerned, and any arguments to the contrary are going to fall on deaf ears.

I have no idea where things are going to go next. Will there be more adventures with Annabelle? Have we seen the last of La Llorona? Is a second go-round with the devilish Nun truly going to happen? Will a supposed tale involving the Crooked Man ever come to fruition? There’s even another potential spin-off introduced here, a demonic cult of devil-worshiping witches who do all sorts of unspeakable evil seemingly for the fun of it.

I only hope that whatever happens next in Conjuring world, a bit more thought, care and imagination are put into generating tension and suspense. This third trip into the horrifying unknown with Ed and Lorraine Warren is a tedious bit of supernatural déjà vu, all of which has me starting to wonder if maybe it’s time for this series to give up the ghost and call it a day.”

All extras are contained on the Blu-ray included with this set:

It’s just the standard set of EPK-style featurettes, but across the board these turn out to be pretty good. Heck, they’re all solid enough it almost makes me feel bad I didn’t enjoy the film more. Almost.

The Conjuring: The Devil Made Me Do It is a rather forgettable entry in the ever-expanding Conjuring universe and the only film featuring Ed and Lorraine Warren as the central characters I’ll never willingly choose to return to. Still, Warner’s 4K presentation is decent enough, and for fans this release will probably prove to be acceptable. 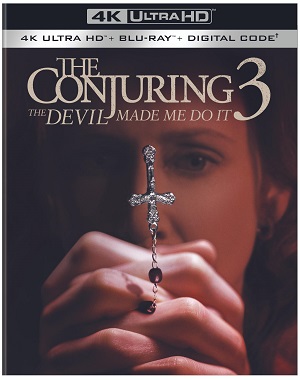