Police officer Valerie Young (Alexis Louder) knew there was something strange going on when she arrested Theodore ‘Teddy’ Murretto (Frank Grillo) for hitting her in the face. First off, it wasn’t a very good punch. Second, he was far too eager to be put behind bars. It’s a fishy situation, and Valerie is going to figure out what he’s up to.

Things get even more bizarre when a drunken John Doe (Gerard Butler) sideswipes a pair of state patrol officers investigating a bullet-riddled abandoned vehicle in the middle of the Nevada nowhere. He’s now in the holding cell directly across from Teddy’s, and by the way he’s pacing across the concrete, one gets the feeling he’s nowhere near as inebriated as he initially appeared.

In director Joe Carnahan’s (The Grey, Narc) stupendously entertaining 1990s-style crime thriller throwback Copshop, it’s no surprise whatsoever that Valerie’s suspicions about Teddy are spot-on. He’s stolen a great deal of money and double-dealt a wide variety of the wrong sorts of people, most of whom would be happy to see the man dead. As for the John Doe, he has a name, and it’s a lethal one: Bob Viddick, a grizzled killer who’s purposefully put himself in jail just so he can get his paws on Teddy’s throat.

This is only the tip of the iceberg, however, because at a certain point, long after Valerie has started assembling all the pieces into a finished puzzle, she finds herself trapped next to Teddy and Bob on the cellblock, behind a locked, bulletproof door. It’s one night of chaos as violence erupts throughout the police station, transforming this unlikely trio into uneasy bedfellows as they ponder joining forces in order to survive until dawn.

It’s down-and-dirty stuff, overflowing in colorfully vulgar dialogue and kinetically bloody action sequences staged with stripped-down aplomb. Grillo and Butler chew the scenery with anarchic gusto, while newcomer Louder makes the sort of explosively memorable debut actors often dream of yet seldom achieve. While there are few surprises, it’s still safe to say Carnahan’s handling of his and co-writer Kurt McLeod’s script, based on an original story by Mark Williams, is borderline perfect.

As terrific as Butler, Grillo and Louder are, it’s veteran character actor Toby Huss who steals the show. He plays fellow assassin Anthony Lamb, and his whack-a-doo, larger-than-life performance is nothing less than sensational. Huss is a cartoonish ball of manic energy, bouncing here and there like a gun-toting combination of Speedy Gonzales and the Road Runner. His level of evil is gloriously unclassifiable, all of which makes Lamb a memorably hissable villain one almost wants to root for no matter how heinously awful his actions frequently are.

I love the crisp clarity of Carnahan’s action sequences. The director isn’t afraid of color, giving the cool blues and the dark, steam-filled depths of a locker room shoot-out more punch and pop than we typically see nowadays with all the desaturated digital tinkering too often seen in bigger-budgeted productions. Cinematographer Juanmi Azpiroz (Boss Level) lends his images a tactile solidity that’s refreshing, while editor Kevin Hale (Stretch) cuts things in a way that adds to each scene’s intensity and never subtracts from them by calling too much attention to his handiwork.

The final throwdown is well worth the wait, as are the goofily inventive final moments of toe-tapping creativity that happily end things on a positive note even if the climactic fade-to-black purposefully keeps what happens next a delicious unknown. Copshop shoots up the screen with jovially pitch-black bravado, and considering how many pulp fiction targets Carnahan hits I’m not going to spend a single second ruminating on the small handful he misses even while shooting at them at point-blank range. 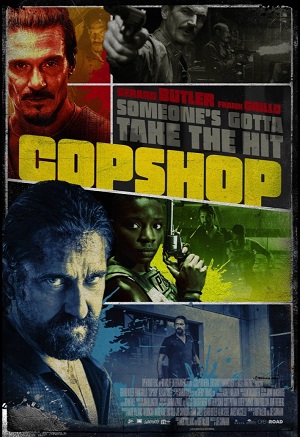