Centuries from now, humanity has spread across the cosmos. On a distant planet on the outer edges of the known universe, a small mining survey team has made first contact with an alien race. Rounds are fired and chaos ensues. No one can ascertain who shot at who first, and back on Earth the Alliance of Governments is clueless as to what should happen next.

Eron Ryle (Frank Grillo) is the commanding general of the planet’s military defense forces, and he does not believe waiting for the politicians to complete their seemingly endless debate is a viable option. Instead, he brings in a team of experts, including disgraced retired war hero Gen. James Ford (Bruce Willis) and his estranged ex, ethnologist Dr. Lea Goss (Perrey Reeves), to chart a course of action. It is quickly determined that Earth must strike first against this new threat. Ryle returns Ford to active duty and helps him handpick a small group of soldiers who will leap across the cosmos and become humanity’s last line of defense against total annihilation.

Cosmic Sin is 88 minutes of convoluted nonsense that can’t decide if it is a straightforward sci-fi action flick or a serious treatise on the complex and murky ethics of warfare. There were moments when I felt like director Edward Drake and co-writer Corey Large were trying to deliver an interstellar Platoon or The Deer Hunter. There were others when I imagined the pair were shooting for some sort of jingoistic outer-space The Delta Force-style yarn, with a grizzled Willis subbing in for Lee Marvin and Grillo tasked with doing his best Chuck Norris impersonation.

The reality is something in between, and that’s as damning as it sounds. I couldn’t take any of what was happening seriously. The overtly theatrical staging of the action sequences and the melodramatic grandstanding as it pertains to the climactic encounter between the remaining soldiers and their powerful otherworldly adversaries are preposterous. Characters come and go like the wind, making it difficult to emotionally attach to any of them — with one notable exception.

Said exception is a veteran soldier portrayed by Costas Mandylor. He’s better than the material, adding a layer of multifaceted solemnity that’s surprisingly interesting. Mandylor has a moment around the midpoint that hints at what Drake and Large’s script might have been. Wounded on the battlefield, his character meditates on the horrors of warfare, the terrifying weight of command and the inherent atrocities of military conflict with a raw potency that hits home. But he also touches on the familial camaraderie that develops between soldiers, especially when under fire, and it was in this moment I started to believe this film might become something worthwhile.

I shouldn’t have gotten my hopes up. Willis, while more invested than usual of late but still not exactly giving his best, and Grillo are barely in the picture, their above-the-title listing coming perilously close to false advertising. The remainder of the cast does what they can, but their motivations are so all over the map none of them genuinely connect to the material. As for the action sequences, they’re so underlit and overedited keeping track of what is happening is next to impossible, and the screen overflows with so much visual noise it gave me a headache.

Worst of all, in a way it kind of seems that Drake and Large are attempting to make a case for genocide, that a preemptive strike against one’s foes is warranted in certain situations. It’s a strange argument to make, and one I honestly do not think the filmmakers intended. But I’m equally not sure what else I am supposed to think, based on the discussions certain key characters have throughout, as well as where things end up during the climax. It’s flat-out bizarre.

I’m all for B-grade science fiction. I grew up on 1980s Chuck Norris/Sylvester Stallone military action cheese (thanks, Dad). The combination of the two frequently works for me even when it leaves others cold. But that wasn’t the case here. Cosmic Sin never comes together, drifting in space like a misbegotten artifact of a bygone filmmaking era its makers seem to be going purposefully out of their way to emulate as poorly as they possibly can. 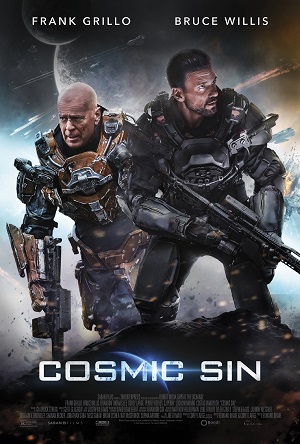