I have zero wish to spend much time on Dear Evan Hansen. This adaptation of the Tony-winning Broadway musical wasn’t for me. I couldn’t get past the core plot device or the film’s callous, almost heartless disdain for the teenage suicide that puts all the subsequent craziness into motion. This choice left a bad taste in my mouth, and because of that enjoying this one became something of a monumental impossibility.

This does not mean I’m ready to dismiss the production entirely. It does have its plusses. As bewildering as their placement in the narrative sometimes is, the songs by La La Land Oscar-winners Benj Pasek and Justin Paul aren’t without merit, and a couple of them are undeniably effective at generating a heartfelt emotional response. Additionally, both scene-stealing youngster Kaitlyn Dever and veteran superstar talent Julianne Moore give authentically lived-in performances bordering on extraordinary, both women deserving of a hearty round of applause even if the material, to my mind, is unworthy of their superlative efforts.

It’s all for naught. Not because the film devolves into a schlocky or saccharine mess; Stephen Chbosky (The Perks of Being a Wallflower) is a far-too-talented filmmaker for that, no matter how melodramatically unsubtle the material. But I found myself unable to accept the lie events are built upon. Teenagers say and do a lot of stupid things—lord knows if my past were put under a microscope my embarrassment would be profound—but what Evan Hansen (Ben Platt) does to the Murphy family is a risibly heinous bridge too far.

And what is that? Evan Hansen, a socially awkward and deeply depressed high school senior, initially through no fault of his own, ends up faking a friendship with recently deceased classmate Connor Murphy (Colton Ryan) after a bizarre misunderstanding leads the boy’s mother Cynthia (Amy Adams) to believe they were bosom buddies. Evan conceals this ruse from his own mom Heidi (Moore) even as the lie plants roots that make him one of the most popular kids in school, as well as a social media sensation.

As engineered by writer Steven Levenson, the way this subterfuge begins happens innocently enough: unhappy Conner stole a letter Evan had written to himself as an assignment from his therapist, and Conner’s parents assume it is their son’s suicide note. As the family is in so much obvious pain, I can somewhat understand the reasons Evan wouldn’t initially tell them the truth. It’s what happens next that’s the problem.

I never felt like the film cared about Conner. He was a plot device, a depressed symbol for all the issues of teenage alienation, parental neglect, and mental illness the filmmakers wanted to explore. There is never any actual sympathy for him, just for what he did and how it makes everyone else in this story feel. Conner is a faceless mannequin, even at the end when lessons are supposedly learned and life continues on, and I found that inexcusable.

Then there is what Evan does once his lie blossoms into something beyond his control. His romancing of Conner’s sister Zoe (Dever). The way he manipulates senior class president Alana Beck (Amandla Stenberg) even when she’s not-so-subtly attempting to stage-manage him.  How he insinuates himself into the Murphy family as an almost adoptive son. It all borders on sociopathic.

Yet everything is designed to make Evan wholly sympathetic, almost free from being judged in any way whatsoever for his actions. He gets the viral moment. He gets forgiven. He gets to profit from his celebrity. He even gets far too close to the girl of his dreams, making for one of the more insidiously discomfiting romances this side of a low-budget 1970s exploitation horror movie. I found it all grotesque, and no matter how sincere the performances or how confidently assured the direction, the unrepentant ugliness of it all did me in.

Can’t say it helps that I didn’t find Platt to be very good as Evan. Not because he’s too old for the part — his age never bothered me — but because his stagey theatricality didn’t mesh with the more grounded and realistically genuine performances delivered by his costars. It’s as if he were still playing the role on Broadway, while Moore, Devers, Stenberg and the rest of the cast understand they’re in a major motion picture. There’s a difference, and Platt does not seem to recognize that.

But mostly my distaste for Dear Evan Hansen boils down to my helplessness as it pertained to its central conceit. There’s plenty Levenson wants to say, and I think it’s clear Chbosky is equally passionate about making sure the writer’s words are heard. It’s the way they go about stating them that I found to be so disagreeably problematic, and no matter how catchy the tune or how hummable the music, this is one song I steadfastly refuse to sing along with. 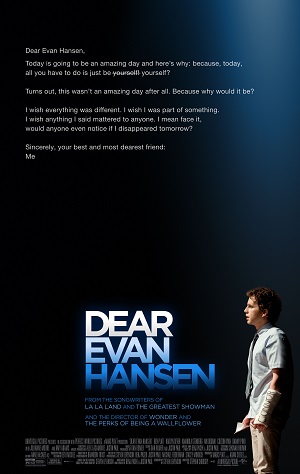