After a night of partying that included a surplus of alcohol, drugs and bad decisions (all of which only got more excessive and egregious as the evening progressed), Alabama bad mates Zeke Olsen (Michael Abbott Jr.) and Earl Wyeth (Andre Hyland) find themselves in the wee hour of the morning secretly dropping off the bruised, battered and bloodied body of the third member of their group, Dick Long, in the parking lot of the local hospital. They do not want anyone to know what happened, especially their friend’s wife, Jane (Jess Weixler), fairly certain no one will understand what it was they gotten up to, believing if the truth were ever to get out none of them could show their faces in public ever again.

Problem is that the emergency room doctors aren’t able to do anything for Dick, the young man dying on the operating table from his wounds. It’s foul play of some sort, that Dr. Richter (Roy Wood Jr.) knows for certain, but what type of foul play, or whether it was even murder or was instead some sort of bizarre accident, those are questions he cannot answer. He’ll leave figuring that out to Sheriff Spenser (Janelle Cochrane) and her overeager new deputy Officer Dudley (Sarah Baker), the pair of them determined to figure out the dead man’s identity so they can speak with his friends and family in order to get some idea of what he might have been up to before being unceremoniously dumped at the hospital.

As weird as elements of that synopsis of The Death of Dick Long might sound, that’s nothing compared to the actual motion picture director Daniel Scheinert (Swiss Army Man) and writer Billy Chew have actually concocted. Inspired by an actual event here in my neck of the pastoral woods of Washington State, what happened to Dick and why Zeke and Earl are so reticent to talk about it is something best learned from watching the movie and not spoken about by me here. Suffice it to say, things get weird, but do so in a visceral, highly personal sort of way that makes it easy to understand why all involved in this tragedy are so keen to keep it secret. But that creepy, uncomfortable lunacy is also what makes the film so peculiarly genuine, the effect all of this ends up having on Zeke’s relationship with his wife Lydia (Virginia Newcomb) shockingly personal and potent in ways I honestly never saw coming.

I know that’s vague, but I’m not sure how else to approach this one. Scheinert and Chew’s story has a number of twists and turns, and while many of them are actually revealed to the audience quite early on, the repercussions they have for all who end up getting involved with this story are shockingly intimate and perversely unanticipated. By revolving things entirely around Zeke and Lydia’s marriage, by so seamlessly weaving the pair’s precocious daughter Cynthia (Poppy Cunningham) into how the mystery behind Dick’s inexplicable demise is solved, the filmmakers ground things in a believable hardscrabble working class humanity that only grows in resonance as things spiral more and more out of control. As outlandish as it all gets, this marriage, this couple, this pair of parents trying to figure out what is best for them, their children and their family, that is the heart and soul of the movie, and because of that the underlying perversity that started this chain of events in motion in the first place isn’t as abhorrently disgusting as it by all accounts should be.

I guess I shouldn’t be all that surprised. After all, Scheinert was one half of a directorial duo (Daniel Kwan being the other) that managed to make a movie about a shipwrecked Paul Dano utilizing Daniel Radcliffe’s overly flatulent corpse as a motorized vehicle to get back to civilization moderately wonderful. The fact he’s able to take the nastier components of Chew’s script and ground them in something authentic, something emotionally genuine, none of that arguably should strike me as being outside the realm of possibility. But that he does it with such ease, with such heart, that I cannot say I expected. More importantly, Scheinert’s trust in his cast to not overplay their collective hand and to treat the material seriously, not as camp, and yet still find a way to maintain the inherent mordant black humor of the piece is equally laudable, his balancing of all these various elements nothing less than exceptional.

Not that I can say all of these multifarious puzzle pieces fit together as nicely as they are likely intended to. The subplot involving Earl is clunky and not nearly as well developed as I felt it needed to be for the climactic bits involving him to have any sort of impact. There are also moments where the ghoulish humor threatens to overwhelm things to the point the inherent drama lurking not-so-subtly underneath the surface starts to dissipate slightly, almost as if Scheinert is so excited about unleashing his next unbelievably insane gag that he almost forgets about the very human tale of a man in existential crisis and family on the verge of tragic collapse he’s been working so hard to tell with such confidently evenhanded authority.

That is all comes together as nicely as it does is a byproduct of that thankfully never happening. The director does manage to maintain focus, and in large part thanks to the exquisite central performance from Abbott Jr. and masterful supporting turns from Cochrane, Baker and especially Newcomb, his motion picture remains a hypnotically shattering gem throughout its breezily paced 100 or so minutes. Scheinert’s latest isn’t going to be for everyone, those easily offended by the slightest sexually-charged indecency likely to walk out of the film halfway through. As for those willing to take the plunge into the animalistically risqué unknown, The Death of Dick Long gallops to the finish line with authoritative tenacity, its final moments hitting me like a swift kick to the head from a startled horse I’d made the unfortunate mistake to frighten. 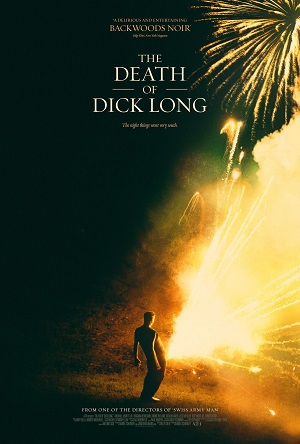