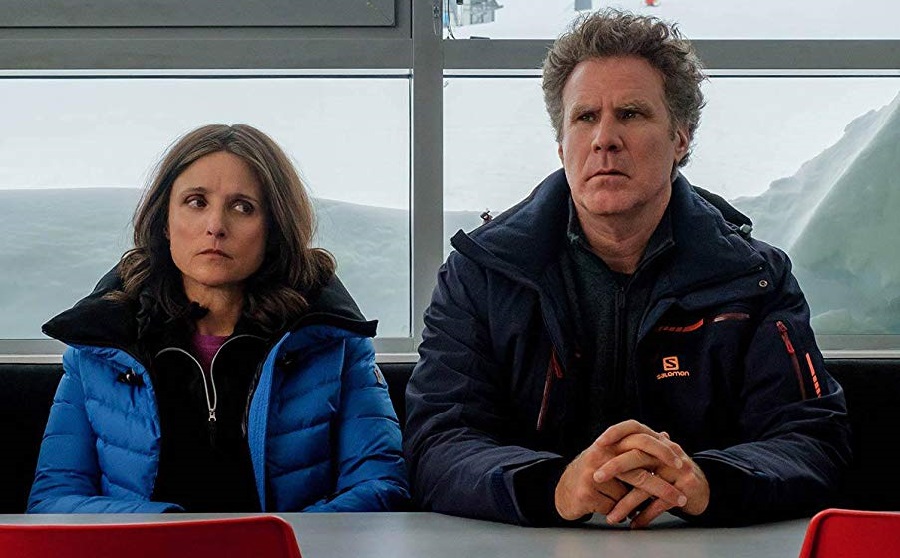 Americans Pete (Will Ferrell) and Billie Stanton (Julia Louis-Dreyfus) are on a ski vacation in the Austrian Alps with their two boys Finn (Julian Grey) and Emerson (Ammon Ford). Barely a day into their week-long adventure, while having lunch on a hotel deck an avalanche comes crashing down the mountain and appears to heading their direction. As a terrified Billie huddles with her sons, Pete leaps from his seat and flees to safety.

Of course, none of them were ever in danger. This was a controlled avalanche, a routine explosive event that, while startling, was nothing to be particularly worried about. But the Stantons didn’t know that. They had no idea there was never any threat. Instead, all they saw was a sea of white cascading towards them, and instead of protecting Billie and their children Pete bolted like lightning as if in a mad dash to save himself and no one else.

First things first. Downhill, directors Nat Faxon and Jim Rash’s follow-up to their 2013 indie hit The Way Way Back, is a well-made if surface-level remake of Ruben Östlund’s 2014 Swedish sensation Force Majeure. It aims lower, takes fewer risks and is content with delivering a few more gentle laughs than its award-winning predecessor was. Faxon and Rash’s marital comedy is not as magnificent as its predecessor was, and there’s not a heck of a lot more to say on that front.

With that out of the way, if taken on its own terms Faxon and Rash’s latest works rather well. Their take on the material is refreshingly frank and doesn’t spend a ton of time going for a cheap laugh or in amplifying the type of lowest common denominator silliness audiences typically expect from Ferrell. They allow the inherent drama of the situation Pete and Billie find themselves facing to do much of the emotional heavy lifting for them, and as such the subsequent film isn’t afraid to emphasize heartfelt drama over slapstick comedy.

The central moral quagmire isn’t exactly surprising. Why did Pete run? Will he own up to his actions? Can Billie trust he’ll always be there for her and their children if a true life or death situation was ever to arise? Is forgiveness even possible after a moment like the one with the avalanche? These are just a few of the questions that arise, and it’s nice to see that the filmmakers don’t want to emphatically answer in the positive or negative a single one of them. Instead Faxon and Rash are content to let their scenario exist in never-ending see of grey, and whether or not the Stantons are going to be able to return to the U.S. and slip back into everyday familial tranquility isn’t anything close to a given.

None of this is as sharp as it was in Östlund’s film. Even with a stark, Who’s Afraid of Virginia Woolf?-like dinner party scene where Billie unleashes all her frustration and anger on Pete right in front of his business partner Zach (Zach Woods) and his new girlfriend Rosie (Zoe Chao), the edges have still been significantly softened for this English-language reimagining of the material. Things never go as dark or end up as emotionally complex as they could have, and the way things are initially resolved between the Stantons was much too lighthearted to substantively linger in a memorably positive way.

But Louis-Dreyfus is outstanding, elevating the material a considerable amount all on her own. She is funny and mournful, timid and forthright, courageous and clueless, sexual and puritanical, selfless and selfish. The actress is all of this and more, Louis-Dreyfus owning the movie in such a way it is impossible to imagine what it would have been like without her in it.

Ferrell isn’t quite up to her high standard. That does not mean he is bad. This is the best he’s been in quite some time, Faxon and Rash challenging the actor do forgo a lot of his typical tricks and abstain from mugging for the camera in pursuit of an easy laugh. Ferrell does still rise to the occasion, especially during that aforementioned dinner party scene, while a third act moment between the actor and Louis-Dreyfus in a hotel hallway borders on magnificent. Even so, he still can’t entirely stop himself from going a little too obviously over the top at times, his juvenile exclamations and puerile antics not always working in the film’s best interests.

I’m not sure what to make of Miranda Otto’s hypersexualized performance as the Austrian hotel manager who befriends Pete and Billie. It’s an outrageous character who gives the talented actress a lot of freedom to do pretty much whatever she wants to. As such, Otto goes for broke, her energetic zeal bordering on assaultive. But she’s also so into her character, so eager to make a memorable impression that I found that even had I wanted to try I simply could not take my eyes off of her, she’s just too fun to watch.

Ultimately, I cannot get angry or feel let down by what Downhill is not (most obviously that it isn’t as deep or as profound as Force Majeure was). I can only judge the film for what it actually is, and on that front I think Faxon and Rash have done a reasonably nice job. Add in Louis-Dreyfus’ superb performance and I find the pair’s latest ensemble dramatic comedy is a winning wintertime frolic as well as an expressively sturdy remake of Östlund’s Swedish masterwork. It’s worthy of a look. 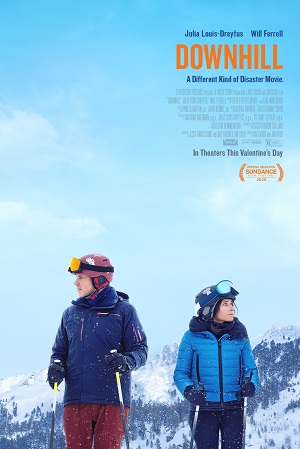