Here’s what I wrote about Dune back in my original theatrical review:

“At the very least, Denis Villeneuve’s ambitiously immersive adaptation of author Frank Herbert’s Dune is upfront that it is only presenting roughly half of the story. The title card proudly — some would say defiantly — reads “Dune Part One,” and even though there is no guarantee there will be a second half, that doesn’t appear to have dissuaded the Oscar-nominated (Arrival) director from playing coy about his intentions.

I have no idea if Warner Bros. will ultimately feel compelled to foot the bill for a sequel. In this new age of theatrical and streaming hybrid releases born in large part courtesy of a global pandemic, it’s impossible to know what the benchmark for success will be where it comes to a massive studio blockbuster release such as this. Suffice it to say, whether or not there will ever be a Dune Part Two, your guess is as good as mine.

But back to this half of the story. Villeneuve and his fellow screenwriters Jon Spaihts (Prometheus) and Eric Roth (Forrest Gump) have attempted to streamline and flesh out Herbert’s prose as best they can. Yet as accessible as their script may be, there isn’t much of an emotional heartbeat thundering in this gigantic visual spectacle’s chest. With precious few exceptions, these were not characters I cared about, making whether they heroically persevered or met a tragically bitter end inconsequential as far as the bigger picture was concerned.

There’s far too much plot to try and spell it all out in a simple synopsis. Keeping things basic, thousands of years in the future, Duke Leto Atreides (Oscar Isaac) is ordered by the emperor to take over the rulership of the desert planet Arrakis and Spice mining operations from the ruthless Baron Vladimir Harkonnen (Stellan Skarsgård). Young Paul Atreides (Timothée Chalamet), son of Duke Leto and his lovely concubine Lady Jessica (Rebecca Ferguson), has been dreaming about Arrakis and its indigenous population, the Fremen.

Not to travel too far into the weeds, Duke Leto is betrayed, the Baron returns to rule Arrakis, Paul’s dreams may not be fictional and the Fremen are more than willing to take up arms against the Harkonnens, who have attempted — and mostly failed — to eradicate them for generations. There’s much more to it, of course, including secrets held close to the vest by Lady Jessica concerning her son, but going into them all would take more words than a single review will allow.

Just know that something is happening every second of the film’s 155-minute running time, and to Villeneuve’s credit, he keeps a solid handle on all of it. I never felt lost or overburdened by the convoluted coming and goings of all the various characters, and even if they’re only around for a scene or two, it’s still fairly easy to know who is who and what side of the conflict they are going to be fighting on.

In the same breath, there’s so much work being done to ensure that all of this nonsense makes consistent sense that it’s pity that precious few of the story’s inhabitants are worth the effort of getting to know. Chalamet tries to make Paul interesting, but there’s only so much he can do during this half of Herbert’s tale. Paul is only on the cusp of coming into his own and discovering the strength to embrace his destiny. As such, he’s more symbol than person, his inner struggles falling flat in ways that grow increasingly tiresome as events build to their inevitable cliffhanger conclusion.

Other characters portrayed by the likes of Josh Brolin, Jason Momoa, Stephen McKinley Henderson, Javier Bardem, Charlotte Rampling, David Dastmalchian, Zendaya, Sharon Duncan-Brewster, Dave Bautista and Chen Chang come and go, some more important or more interesting than others, but all weighing heavily on the outcome. Only Momoa — who is sensational, and delivers possibly my favorite performance in the film — and Rampling make a memorable imprint. They both leap off the screen, and it’s almost a pity they do not get a great deal more screen time.

There is one human element that Villeneuve gets perfect, and that’s the relationship between Duke Leto and Lady Jessica. Isaac and Ferguson are sublime. The pair disappear into one another’s arms so completely, so effortlessly, that the heartbreak generated when they are forced apart is entirely genuine. The actors craft multidimensional portraits of sacrifice, courage, valor and togetherness that are close to remarkable. Ferguson is particularly luminous in ways that defy easy description.

As to the technical merits of this production, those are beyond reproach. From Hans Zimmer’s (The Dark Knight) score to Patrice Vermette’s (Sicario) production design, from Jacqueline West’s (The Revenant) costumes to Greig Fraser’s (Zero Dark Thirty) cinematography, this is one of the more exquisitely realized science-fiction epics I’ve seen in ages. Herbert’s world comes alive in ways that boggle the mind and the senses, as Villeneuve showcases one eye-popping delight after another with supremely confident bravado.

As messy and as unfocused as it may be, I admit I admire the wildly cavalier swings of David Lynch’s 1984 version of Herbert’s source material. There’s something magically madcap about it that will always garner the film a comfortable place in my heart. Does it work? No, not really, but it has a gonzo attitude I responded to as an impressionable kid and am still partial to now.

Not that I’m comparing Lynch’s attempt to bring the book to the screen with Villeneuve’s. They’re very different creatures, and it’s clear that Warner Bros has given the latter far more freedom to realize his vision than Universal ever gave the former almost four decades ago. But I do bring up my feelings for that previous feature because, at least in that instance, I was (and still am) able to analyze a finished feature. That’s simply not the case here.

Will my opinion on this incarnation of Dune change if Villeneuve is granted the budget to make the second chapter? That’s possible, as all the building blocks are in place to see Paul’s journey come to a satisfying end.

But I can only judge what exists now, not what might at some unknown point in the (hopefully) near future. This Dune, for all its technical virtuosity, is stranded in an emotionally barren desert, and for all that is extraordinary about this production, that’s one sundrenched obstacle I’m not so certain I have the willingness to try and overcome.”

Having watched the film a couple more times now, I still stand by my assertions that this version of Dune feels both frustratingly incomplete and emotionally stunted. Now that Warner has officially given the green light for the second part of this story to be filmed, maybe those assessments will change when both halves of the whole can be seen all in one sitting.

Nevertheless, Denis Villeneuve’s ambitious opus remains a technical marvel, and Warner’s 4K presentation of the film is absolutely immaculate. It’s a staggering achievement on a number of levels, and even if I’m still not responding to this adaptation as positively as so many others have, that does not lessen my appreciation for what Villeneuve has accomplished in bringing his vision of Herbert’s opus to the screen.

Dune is a technical marvel, and Warner’s 4K presentation of Denis Villeneuve’s ambitious adaptation of roughly the first half of Frank Herbert’s novel is undeniably impressive. I’m still not a huge fan of the overall film itself, but that doesn’t make this release any less superb. Fans will want to pick this one up immediately. 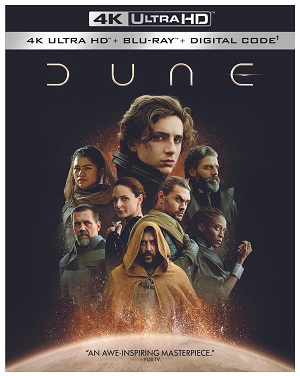