Entertaining Tournament of Champions Plays to a Semi-Satisfying Draw

Determined to take down the Minos company after what its murderous escape room did to them, survivors Zoey Davis (Taylor Russell) and Ben Miller (Logan Miller) head to New York thinking they’ve discovered its secret headquarters. But this is only an elaborate ruse to get the pair on a not-so-run-of-the-mill subway car, and along with four strangers — each champions of a past Minos game themselves. Zoey and Ben realize they’re being forced to play for their lives one more time.

There’s not a lot more to Escape Room: Tournament of Champions, and anyone walking into the theater expecting otherwise will likely saunter out afterward disappointed. Picking things up pretty much right where its 2019 predecessor concluded, this sequel hits the ground running and subsequently refuses to slow down, even when its characters are taking a supposed breather.

It’s a full-speed descent into creatively lethal madness, and returning director Adam Robitel and his talented technical team come up with a variety of inventive ways to “Ten Little Indians meets Saw” their primary cast until only a precious few remain. But, as fun as all of this can be, there’s also little in the way of shocks or surprises, as the outcome of all this madness is fairly easy to predict no matter how inspired some of the escape rooms happily turn out to be.

This is mostly due to the fact that, unlike the first film, I never felt like a got to know the majority of the competitors this time around. The four contestants other than returnees Zoey and Ben make almost zero impression whatsoever. Considering one of them (Thomas Cocquerel) is a former priest who’s dealing with a crisis of faith, and another is a hardened loner (Holland Roden) with an inability to feel physical pain, this feels like a major missed opportunity.

I wanted to have an emotional connection to these new players. I wanted it to matter whether or not they would live or die. Instead, they are just cogs in a larger mechanism, each filling a role that allowed things to progress to a preordained conclusion I had figured out roughly within the first few minutes of the film. If anything, I had this strange feeling that there had to have been some behind-the-scenes tinkering that Robitel had little to no control over, almost as if the powers that be ordained a final cut of less than 90 minutes, character development be damned.

Don’t get me wrong. It’s all still wickedly entertaining. One escape room set in a bank with a boobytrapped checkerboard floor — complete with lasers — that requires the entire group to work as a team in order to solve its deviously murderous puzzle is outstanding. Another on a rundown beach with a lighthouse and seafood shack slowly sinking into the sand is equally inspired. So many of the little visual touches sprinkled throughout these sets are ingeniously sublime.

I don’t know: I liked this sequel well enough, and even if the semi-cliffhanger teasing another installment is somewhat obnoxious, and although I wasn’t nearly as invested in the characters this time around, when the end credits began their crawl, a happy smile sat upon my face all the same.

Escape Room: Tournament of Champions isn’t exactly victorious, but it doesn’t lose the game, either. It’s something of a wash, a 1-1 draw that can only be decided by a penalty shootout whose outcome we’ll have to wait for in the inevitable sequel. 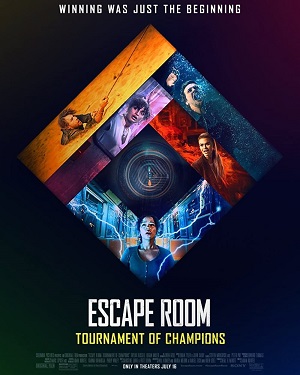