Zoey (Taylor Russell) is a physics prodigy who has trouble speaking her thoughts and opinions aloud in class. Ben (Logan Miller) is a grocery store stockroom clerk with a troubled past that has stifled all of his opportunities for any sort of advancement. Amanda (Deborah Ann Woll) is an Iraq War veteran who has been having difficulty putting her days in combat behind her. Jason (Jay Ellis) is a high-powered stockbroker and financial wizard who has no trouble stepping on the heads of others if it means he can achieve advancement. Mike (Tyler Labine) is a truck driver whose failing physical health can be traced back to his days working as a coal miner. Danny (Nik Dodani) is a gaming enthusiast with a knack for problem solving even if his social skills leave something to be desired. 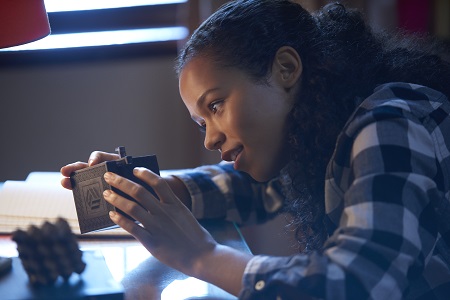 Six strangers, each having their own unique (if secretly troubled) background all find themselves invited to an exclusive Escape Room where the first one to find all the clues and solve every puzzle will win the grand prize of $10,000. But what initially appears to be a bit of harmless fun turns out to be anything but. Soon they discover this isn’t a game at all, each room they enter offering up a set of lethal challenges that will literally kill them if they fail to decipher every puzzle. Additionally, whoever set up these rooms knows more about them than they do themselves, Zoey, Ben, Amanda, Jason, Mike and Danny all tied together in a secret way that if they’re not careful might just lead to their collective undoing.

The first wide release of 2019, director Adam Robitel’s (The Taking of Deborah Logan, Insidious: The Last Key) Escape Room is an inventive little horror-thriller that has a fair amount of fun with its somewhat familiar premise. Sort of a real world variation on Vincenzo Natali’s 1997 cult favorite Cube combined with the current escape room craze, the movie spends more time than expected fleshing out its characters while also still coming up with a variety of moderately inventive ways to kill off its cast one at a time. Bragi Schut (Season of the Witch) and Maria Melnik (“American Gods”) have written a nifty little screenplay that imaginatively toys with convention, and while the actual outcome isn’t ever in doubt getting there is still a heck of a lot more fun than I anticipated before sitting down in the theatre to give the film a look.

I think what I liked most is that it never feels as if Robitel is rushing things just for the sake of attempting to keep the pace moving at breakneck speed. While never measured or methodical, the filmmaker still takes the time to allow the viewer to get to know these characters well enough so that when some of them meet their doom there’s an actual emotional response from the audience when it happens. I honestly cared about the majority of them, especially Zoey, Mike and Amanda, their collective fates meaning something to me to the point I genuinely hoped all of them were going to find a way to make it through this ghoulish maze alive.

Not that elements couldn’t have been handled bit better than they unfortunately are. A flurry of brief flashbacks spotlighting the sextet’s connection to one another are inelegantly inserted into the proceedings, most of this exposition so well delivered verbally by the character they affect the most the inclusion of these scenes outside of the escape room end up feeling frustratingly superfluous. I also can’t say I was pleased with the way Danny was treated, and while I get that he is supposed to be just to the wrong side of annoying there was something about the way he’s written and portrayed that just didn’t sit well with me. Not that Dodani is bad, mind you, his performance is perfectly fine, it’s that the character is the only one that feels like a giant cliché.

I should also say that the final act is tediously messy. Not only is the climax haphazardly structured, it’s also obvious, and I can’t say anything that happened during the finale caught me by surprise. Most egregiously, the blatant setup for a sequel is damningly obnoxious, especially considering the filmmakers could have achieved the very effect they’re going for if they’d ended things with a key character’s victorious, self-empowered smile instead of including a silly epilogue that makes all of this suddenly feel like an episodic syndicated television show from the ‘80s instead of a self-contained feature film.

No matter. Robitel sets up a number of winning set pieces for his characters to attempt to get themselves out of, not the least of which is an upside-down pool hall with a collapsing ceiling (which makes it the floor) that’s like something out of The Poseidon Adventure only with a twisted psychotic bent that’s efficiency homicidal. There’s also a terrific score courtesy of composers John Carey and Brian Tyler (Crazy Rich Asians), their rich variety of themes helping augment the action splendidly. Because of this none of the picture’s more egregious shortcomings stop it from entertaining, Escape Room a diverting little chiller I couldn’t help but enjoy. 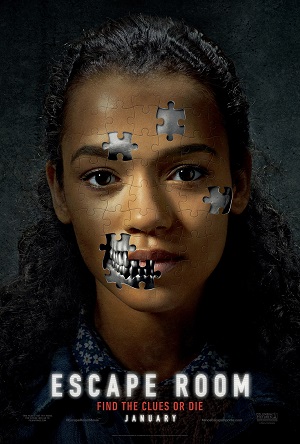