Drone Procedural Eye in the Sky a Hot Button Thriller

Colonel Katherine Powell (Helen Mirren) has found her target in Nairobi. From her secret bunker location somewhere in the United Kingdom, she’s assembled her team on the ground in Kenya to handle the apprehension of the suspects. She has her superior, calm, level-headed Lt. General Frank Benson (Alan Rickman), along with a room full of high-level politicians, conferenced in on events over in Whitehall. She’s also enlisted the aid of the U.S. military, drone pilot Steve Watts (Aaron Paul) handling surveillance thousands of miles away from the on-the-ground action in a New Mexico military base.

Together, they are going to organize and launch a strike against a group of ruthless terrorists, a gang that includes both British and American nationals, a military unit led by crack Kenyan soldiers tasked with making the arrest. But things quickly go south when the suspects retreat to an isolated location in a small village surrounded by mercenaries making apprehension close to impossible. Sending a spy (Barkhad Abdi) into the danger zone to augment the drone surveillance, based on this intel Colonel Powell quickly comes to the conclusion that the only rational course of action is to have Watts launch missiles into the small house the terrorists are coordinating within. Problem is, a child, no older than eight or nine, is selling bread outside on the street corner, directly adjacent to the building set to be destroyed, causing all involved to weigh her potential death against the cost of letting these killers go free to continue their reign of terror.

A real-time procedural with a heck of a lot on its mind, director Gavin Hood’s Eye in the Sky is a thought-provoking return to form for the Tsotsi filmmaker after the dual disappoints of X-Men Origins: Wolverine and Ender’s Game. Anchored by an astonishing cast, all of whom are working at or very near the top of their collective games, most notably Mirren and the late Rickman (in what is sadly his last on-screen appearance, although he’ll lend his voice to the Caterpillar in this summer’s Alice Through the Looking Glass), the movie is a tense, nicely plotted what-if tale that feels as if it were lifted directly from today’s headlines. Guy Hibbert’s (Five Minutes of Heaven) script is a model of efficiency, all pieces working in intimate tandem with those next to them allowing the central dilemmas being talked about to resonate with heartbreaking determination.

The movie wants to look at drone warfare in as comprehensive, yet as objective, a manner as possible, treating the dropping of bombs on unsuspecting potential terrorists and the threat of unintended collateral damage as it pertains to non-combatants  as if it were a journalistic discussion that should be debated in a cold, clinical manner. While emotion does play a part, it is just as clearly kept at arm’s length for the majority of the picture. More, those that allow themselves to succumb to it, mainly politicians worrying about their futures, but also a few soldiers and spies tasked with following through on their orders, are in some ways looked down upon, almost as if their inability to take their feelings out of the discussion makes them ill-equipped to handle problems just like these.

In that way, there is something of a minor tonal imbalance, almost as if Hood and Hibbert would like to have their cake and eat it, too. They attempt to eschew anything that could be considered sensationalistic or would reek of bias, yet are not above playing up scenes of an innocent Muslim child twirling in her yard with a hula hoop in slow motion while at the same time showing how various forms of surveillance technology are utilized to paint a bleak picture of the terrorists, thus making bombing them silently from above practically the only sane course of action. It is a movie that longs to live in the gray areas of the conversation, yet one that also has a grand time painting things in black and white with little in the way of question marks separating one extreme from the other.

All that being the case, Eye in the Sky is still an incredibly effective thriller that gets the blood boiling while also challenging the intellect. It does not skimp on thrills, things building to their conclusion with a swiftly building ferociousness that’s impressive. The way the filmmakers connect all the varying locales, how each group of characters are reliant upon the actions of the others, it all works seamlessly, each fragment of the greater whole energizing the story and the situation marvelously. The psychological components are terrifying in their authenticity, augmenting the sense of urgency that permeates the story, all of which makes the explosive nature of the climax even more disquieting.

My complaints in regards to some of the more blatant and obvious aspects aside, Hibbert’s script is extremely well-crafted. The ticking clock aspect never feels like a trick. Instead, about the time Colonel Powell got on the line to the Kenyan military commander in charge of the initial arrest I found I was becoming more and more intrigued by what was transpiring. When things take their catastrophic turn towards violence, the way she engineers Abdi’s spy to be sent into harm’s way, how she handles the sight of the little girl selling bread and deals with Watts’ initial reticence to unleash his catastrophic payload, Hibbert’s screenplay never employs needless tricks or inorganic twists of fate in order for any of this to happen. There is a straightforward elegance that’s spellbinding, and as such I never lost interest in what was transpiring at any point. 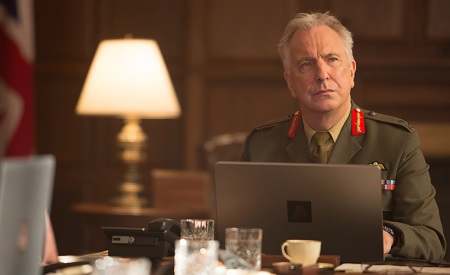 As for Hood, his direction is reminiscent of his handling of his better films, A Reasonable Man or Tsotsi, which is a terrific turn of events indeed. Haris Zambarloukos’ (Cinderella) cinematography and Megan Gill’s (Rendition) editing are superb, each working with the other to continually ratchet up tension all the way through until the suitably heart-stopping finale. The levels of relief, anger, frustration and misery all come across as genuine, and even as melodramatic as the last few moments become, Hood imbues every second of the film with a galvanizing veracity I couldn’t ignore.

Eye in the Sky is not what I feel like it could have been, and I do find myself wishing the story wouldn’t stop cold in its tracks every so often so one of the key players could proselytize one way or the other upon the issue of drones in the war on terror. I also feel I should point out I felt more of a connection to last year’s drama Good Kill with Ethan Hawke than I ultimately do with this. Still, Hood and Hibbert’s procedural is a crackerjack affair in all the ways that count, and it’s safe to say it looks at this hot button issue in a way certain to get audiences talking afterward. It’s a good film, maybe even an important one, time going to be the final arbiter as far as that is concerned. 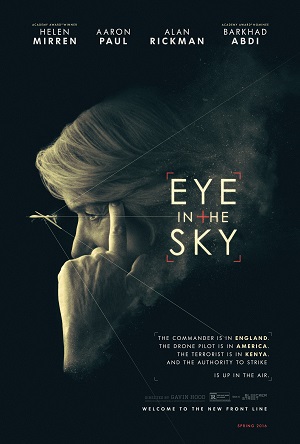