Starting July with a triumphant explosion of laughter and gore, Netflix’s Fear Street Part 1: 1994 is a gruesome treat that kicks off the service’s ambitious horror trilogy. Inspired by the series of novels by Goosebumps author R.L. Stine, director Leigh Janiak (Honeymoon) hits this opening chapter out of the park, delivering a ballsy, take-no-prisoners supernatural slasher I instantly fell in love with.

The town of Shadyside is all doom and gloom. Residents feel they’re cursed, destined to live a life of hardship that at any moment could instantaneously transform into something even more catastrophically terminal. They’ve been left in Sunnyvalle’s perpetually prosperous shadow, whose citizens are not above lording it over their downtrodden next-door neighbors at every opportunity.

Deena Johnson (Kiana Madeira) is in a bad mood. The love of her life, Sam Fraser (Olivia Scott Welch), has left Shadyside for Sunnyvalle. Worse, she’s now dating a boy — a football player no less — and this has Deena beside herself in anger. If it wasn’t for the fact the two towns are getting together to pay their respects to the seven victims of a massacre at the local mall, she’d be silently screaming into a pillow, listening to her Pixies-Garbage-Cowboy Junkies-filled mixtape back at home, instead of being forced to stand in the general vicinity of her ex at Sunnyvale Stadium.

This is where things go bonkers. On the road dividing Shadyside from Sunnyvale a car careens into the woods and the remains of legendary witch Sarah Fier, burned at the stake in 1666, are found entirely by chance. Sam bleeds on the bones and inadvertently unleashes a demonic force obsessed with slicing her, Deena and everyone else who was at the scene of the crash to bits. A night of unimaginable bloodshed ensues.

I think what I adore about what Janiak and her team of co-writers have accomplished is that they refuse to judge any of their primary characters for any of their decisions, good or bad. She treats all of these youngsters as people facing a crisis far beyond the pale of rational thought, each of whom is forced to look inside themselves and decide what sort of person they want to be.

Even better is the way the filmmaker handles the relationship between the two teenagers. Again, there is no judging. Instead, they just get to be. It’s the 1990s, they’re both from a small town, and they are understandably uncertain how the rest of the world, let alone members of their two close-knit communities, would react if they were open about their mutual affection.

This helps make their anger at how their friendship dissolved all the more powerfully authentic. Madeira and Welch play their scenes with intimate ferocity; the heat emanating off them is all the more powerful because of this. The two actors have earthshaking chemistry, and as the body count rose and things became increasingly perilous, my desire to see them survive the night and rekindle their fiery passions only magnified.

Not that Janiak skimps out on any of the nasty bits. Channeling her inner Wes Craven, when the knives (along with axes, straight razors and assorted carving utensils) come out, the bloody aftermath is certainly not for the squeamish. While there’s a bit too much CG augmentation, that does not make the gore and makeup effects any less impressive. These kills are suitably horrifying, the climactic act is particularly outstanding, and I’m happy to say it was an actual question mark as to who was going to make it out of the group’s supermarket showdown against Fier’s undead minions alive.

There are winning supporting turns from Benjamin Flores Jr. as Deena’s little brother Josh, Julia Rehwald as Shadyside’s truculent, drug-dealing cheerleader Kate Schmidt, and Fred Hechinger as good-natured class clown Simon Kalivoda. Each actor gets multiple opportunities to shine, especially Flores. Janiak gives all of them three-dimensional characters who go way beyond the hormonal high school horror archetypes films like this are normally known for.

Can’t say I was a huge fan of the cliffhanger ending, though. I would have preferred a wee bit more closure as far as this opening tale is concerned. Some of the humor also falls a little flat, but I can also see how those bits may have worked better in a darkened theater with a raucous audience hooting and hollering than they did sitting on my couch by myself at home.

Who am I kidding? Fear Street Part 1: 1994 is an absolute blast. Janiak begins her trilogy with a bang, and I for one cannot wait to see how deep the roots of Sarah Fier’s evil run underneath Shadyside. I’m equally excited to learn if our plucky team of surviving heroes has what it takes to end this witch’s three-century reign of terror for good. 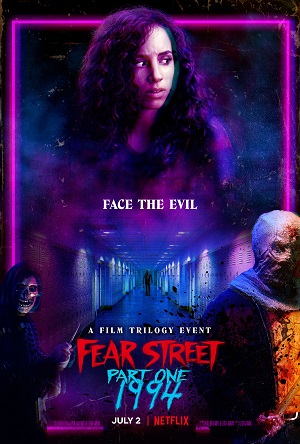