With Sam (Olivia Scott Welch) possessed by the spirit of Sarah Fier, Deena (Kiana Madeira) is determined to save the love of her life from eternal damnation, before she becomes the latest in Shadyside’s long line of teenage serial killers. With the assistance of her whip-smart little brother Josh (Benjamin Flores Jr.), she tracks down one of the few people to have ever survived one of Fier’s demonic assaults, local agoraphobe C. Berman (Gillian Jacobs).

While not exactly happy to welcome the pair into her home, especially as they have a hogtied Sam hidden in the trunk of their car, Ms. Berman still feels compelled to help. She proceeds to tell Deena and Josh what happened the night mild-mannered athlete Tommy Slater (McCabe Slye) went inexplicably nuts, a quiet summertime evening in 1978 at Camp Nightwing that was transformed into a hellish bloodbath that left multiple campers dismembered.

By the very nature of its flashback structure, Fear Street Part 2: 1978 cannot help but be a slight step down from its gruesomely entertaining predecessor. That does not mean director Leigh Janiak’s middle chapter of her trilogy, inspired by the works of author R.L. Stine, isn’t still a heck of a lot of fun. Channeling any number of summer camp slasher favorites — most notably Friday the 13th and Sleepaway Camp — this sequel is a bloody good time overflowing in gory thrills.

It is also far more than just a goofy slasher throwback with a supernatural twist. Once again Janiak and her talented team of writers have done a terrific job of making sure the central mystery fueling Sarah Fier’s three centuries of evil remains front and center. Moreover, they’ve also populated this installment with a sensational collection of characters worth spending time with. The central relationship between sisters Cindy (Emily Rudd) and Ziggy (Sadie Sink) is especially strong, as is a surprisingly multifaceted subplot involving Cindy’s estranged former best friend Alice (Ryan Simpkins).

I’m hesitant to reveal much more, even though where this story is headed is never in doubt. The main twists are obvious, and the fact we know going in just about everyone — save dashing future Sunnyvale sheriff Nick Goode (Ted Sutherland) — is going to die doesn’t help. I should also say that the inclusion of a certain Supernatural season finale staple by Kansas on the soundtrack irked me, but this is a personal annoyance and as such should probably be taken with a grain of salt. In other words, carry on, wayward son, and maybe ignore that particular nitpick.

Still, as love letters to 1970s and ’80s slashers go, this is one of the best I’ve seen outside of 2015’s The Final Girls. But unlike Todd Strauss-Schulson’s fitfully funny cult favorite, and even though Janiak does make sure to include several solid laughs, this sequel is most definitely not a comedy. The director treats her characters with respect and does not mitigate the dire seriousness of the situation they find themselves forced to deal with. Sarah Fier’s darkness becomes even more pervasive and destructive, all of which makes it crystal clear how horrific the stakes are for Deena, Josh and poor, possessed Sam back in 1994.

The final scenes of Fear Street Part 2: 1978 throw everything we thought we knew about this story into outright chaos. It’s a delicious cliffhanger, one that’s far more satisfying than the one that concluded the first chapter, because it brings solid closure to this tale while also opening the door to even greater thrills to (hopefully) come.

But the focus remains on Deena and Sam, whose relationship is this trilogy’s heart and soul. Even with so much working against them and the evil connected to Sarah Fier intent on their grisly evisceration, here’s hoping they get their happy ending. Goodness knows they’re working overtime to earn it. 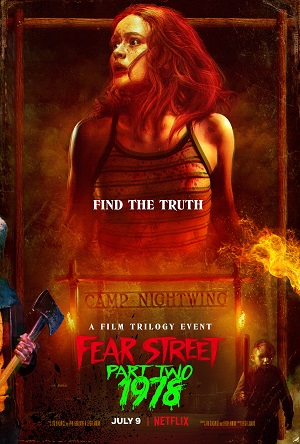