The Purge franchise might go down as one of the more prescient exploitation horror-action series of the 21st century. Writer James DeMonaco’s brainchild has morphed from its modest 2013 home-invasion roots to, with the arrival of The Forever Purge, full-on commenting on the United States drowning in extreme rightwing propaganda, racist fearmongering and political incitement to violence.

There’s nothing subtle about this fifth entry, and I can’t help but feel that’s exactly as it should be. The countrywide insurrection that makes up the majority of the 103-minute running time doesn’t pull any of its morbidly unsettling punches. The white supremacists who make a collective decision to keep the yearly Purge Night going forever until only “true Americans” (i.e. straight white people) are left in the continental U.S. are suitably disgusting. They’re all the worst sort of people on every level, and there’s nothing wrong whatsoever with DeMonaco and director Everardo Gout (Days of Grace) showcasing them as such.

There does, however, come a point where reality and fantasy too closely mirror each other. As over the top as the terrors depicted in this film might be, they still pale in comparison to the reality of what happened in real life on January 6. We’ve gotten a small taste of what this sort of formerly unthinkably dystopian fantasy nightmare might actually look like, and as expertly as Gout stages things, I still found the inherent thrills and chills of this particular nationwide trauma slightly muted because of that.

The most unsettling aspect of this sequel is how it captures the zeitgeisty fear of so many as to how easy it is for a well-financed political minority to take back power after a shellacking at the ballot box. The story takes place four years after the events of The Purge: Election Year. The New Founding Fathers of America (NFFA) are swept back into power in the House, Senate and presidency with the aid of state and local governments, which curbed voting rights, along with a major assist from wealthy donors bankrolling nativist propaganda to rile up their rightwing base.

Sound familiar? DeMonaco and Gout do what all good, down-and-dirty horror filmmakers are supposed to do: play on real fears while pulling zero punches. Their thriller is pointedly aggressive in how it approaches its subject matter, unafraid to revel in its exploitation roots, while at the same time offering up giant dollops of purposefully obvious social commentary.

For those in need a plot synopsis, after the first Purge Night of the newly reinstalled NFFA concludes, Texas rancher Caleb Tucker (Will Patton), his son Dylan (Josh Lucas), Dylan’s pregnant wife Cassie (Cassidy Freeman) and Dylan’s younger sister Harper (Leven Rambin) awake to discover that the evening’s carnage is still ongoing. With the aid of two of their undocumented ranch hands, Juan (Tenoch Huerta) and T.T. (Alejandro Edda), and Juan’s wife Adela (Ana de la Reguera), all of them flee to the only safe haven open to them: Mexico.

It’s all very well directed by Gout, and the action scenes have a punchy magnetism that is as brutal as they are cutthroat. It should also be noted that de la Reguera delivers a ferocious, scene-stealing performance. She takes DeMonaco’s material and makes it sing in ways far beyond anything he likely dreamt possible. Her Adela is the best character this franchise has introduced since Frank Grillo burst onto screens as Leo Barnes in The Purge: Anarchy. She’s terrific.

If this is the last theatrical chapter of The Purge franchise, it gets the job done. Much like 2018’s The First Purge, this new entry dials into so many hot-button issues that keeping track of them amid all of the bloodshed is alluringly hypnotic. The Forever Purge also puts the minority members of its cast front and center, their steadfast heroism a call to action to stand up against fascism, extremist ideology and racist violence that is worth listening to. 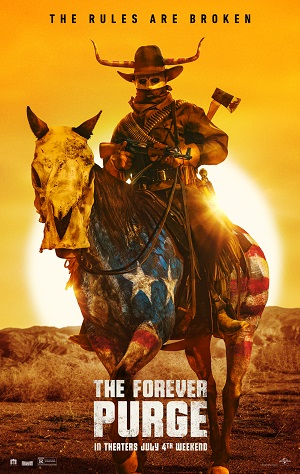