I was a little leery when Disney announced they were making a sequel to their 2013 smash Frozen. That female-driven musical adventure hit all the right notes and had one of the better climaxes of any of the studio’s animated classics going all the way back to their first motion picture, 1937’s Snow White and the Seven Dwarfs. It offered up a rousing conclusion that didn’t require the damsel in the distress to be saved by a dashing prince. The film celebrated sisterhood and in the process showed how selfless love could triumph over evil stating that acceptance, understanding and forgiveness were universal forces for change deserving of being embraced without hesitation.

Thankfully Frozen II doesn’t mitigate, lessen or belittle any of the first film’s achievements. Instead, returning directors Jennifer Lee (who also crafted the finished screenplay) and Chris Buck continue the story of Arendelle sisters Queen Elsa (voiced by Idina Menzel) and Princess Anna (Kristen Bell) with gently confident authority. The characters are granted the opportunity to grow and evolve in ways that are richly complex, allowing them to go in separate directions while still gallantly supporting one another as they march into the unknown hand-in-hand. It is a sequel that exists to tell its own individual story and not just ride on the Oscar-winning coattails of its predecessor, watching it a continual joy that filled my heart with glee.

I don’t want to say a lot about the plot. Even though there is a central mystery at the heart of the story, it isn’t like I’m too worried about spoiling any of the many twists or turns. I don’t want to say anything because I just feel that this ends up being a movie I want audiences to experience with as little knowledge in regards to what ends up happening as possible. The surprises are in the many ways the relationships between the characters evolve, and not just with Elsa and Anna, but also with woodsman Kristoff (Jonathan Groff), pint-sized snowman Olaf (Josh Gad) and reindeer Sven as well. It is on their interactions Lee centers the script on, watching them all take shape in such a multifaceted and emotionally nuanced fashion a delectable treat I couldn’t help but savor.

This is a darker story, definitely more mature, and I can in some ways see how a few parents might be initially worried their smaller children might be frightened by some of what happens to Elsa and Anna or that they don’t understand some of the adult themes Lee and Buck choose to emphasize. I cannot say I feel the same. I’ve always believed younger children deserve to be challenged and shouldn’t be talked down to. Many of my favorite films as a wide-eyed kid included works like The Black Stallion, Dragonslayer, The Black Hole, Something Wicked This Way Comes and Watership Down, all of which feature moments of uncertainty and darkness that, for a youngster, could feel a little bit terrifying. But I was able to navigate through that fear and I believe doing so gave me a greater understanding of a handful of life’s complexities I maybe wouldn’t have pondered otherwise, and I treasure the fact my parents trusted I would be able to do just that.

What I will get slightly annoyed with, and this somewhat shocks me, is the music. Don’t misunderstand; I think all of the songs are pretty great. My problem is that, unlike the first film, some of them don’t seem to fit comfortably inside the narrative. Groff gets an ’80s-style power ballad that both knocked my socks off while it also left me more than a wee bit horrified, while a certifiably bizarre little ditty featuring Gad (but soon involves almost the entire cast) is a bit of psychedelic whimsical silliness that hit me as being weird only for the sake of being weird. But Elsa’s big number “Into the Unknown” is well worth the wait, the song helping drive the narrative forward before finally ending with a jaw-dropper of a climax that left me shattered.

Will Frozen II strike the same chord with audiences as Frozen did back in 2013? That’s difficult to say. The vocal performances continue to be outstanding, the animation is as stunning as ever and most of the songs are ones I can easily imagine audiences singing aloud the choruses of as they leave the theatre. But it is a darker film, and many of the choices the characters make are decidedly adult and not always inherently comforting. Still, this is a strong, richly rewarding sequel that deftly builds on the themes introduced in the first film and brought to thrilling conclusion here. While not my favorite animated film of 2019 I still loved it one heck of a lot, Elsa and Anna timeless role models viewers of all races, genders and ages should happily want to emulate. 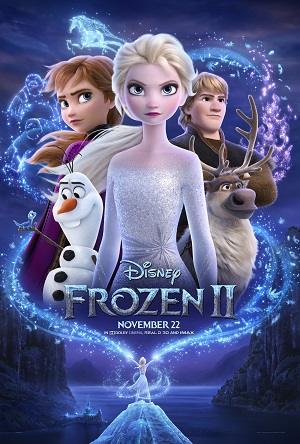