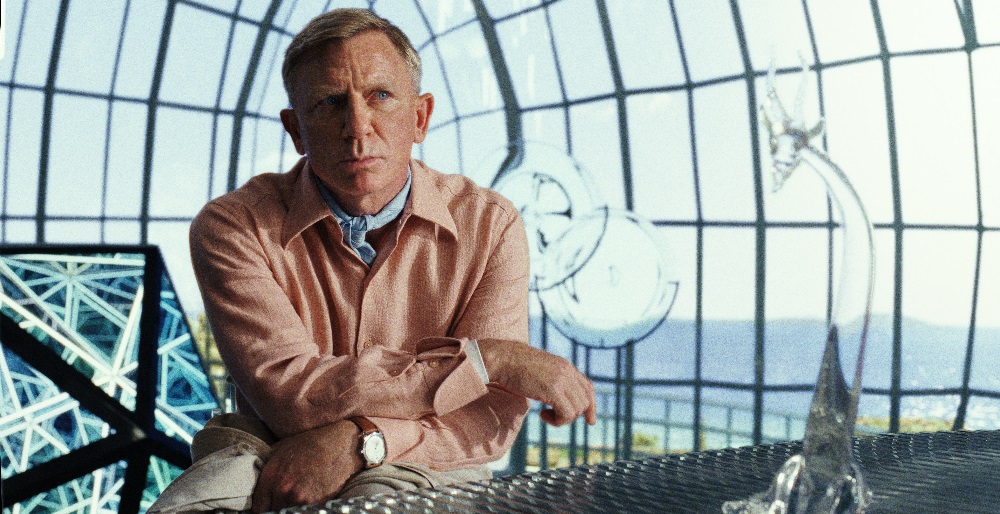 That’s the setup for Glass Onion, writer-director Rian Johnson’s ingenious sequel to 2019’s Academy Award–nominated box office smash Knives Out. Suffice it to say: someone will die, everyone remaining upright is a suspect, and it is up to Blanc to uncover the killer’s identity before more bodies violently crash to the floor. It doesn’t get more straightforward than that.

While different in tone and structure from the previous film, this one is even more rapturously entertaining than its predecessor. It is also quite a bit funnier. The first third is hysterical, in fact, as Blanc bumbles around Bron’s personal Greek island and all its grotesque, overproduced grandeur as if he were Jacques Clouseau’s illegitimate offspring and not the second coming of Hercule Poirot. The shambling cadre of overexcited lunatics who make up the remainder of the core cast are equally goofy, each acting as if they’re cartoonishly auditioning for a part in a remake of 1985’s slapstick classic Clue.

Everyone except for Monáe’s Andi. She’s in a different motion picture, and that’s by design. Rigid and aloof, her body a temple of controlled fury, Andi is a coiled serpent aching to strike but unflappable enough to wait for the precise moment to do so. She’s the oil in this party’s water, and it’s clear there’s more to this confident woman of precious few words than initially meets the eye.

But it’s all a ruse. Johnson and his talented ensemble are toying with the viewer. What appears to be a light and fluffy lark quickly morphs into something far more devilishly engrossing. It’s as if the filmmaker has taken The Last of Sheila and combined it with Ten Little Indians and then put his own macabre “eat the rich” spin on it. It’s shockingly meticulous in language, visual style, and just plain old cinematic joie de vivre.

Things move backward and forward in the blink of an eye. Guests remove the masks they present to the everyday world — only to reveal new disguises they’ve meticulously crafted to keep themselves from facing the harsh repercussions of all they’ve done to achieve their wealth. Truth becomes fiction, lies are transformed into facts — and at the center of it remains Benoit Blanc, staring straight into the beating heart of this house of transparent cards so as to ascertain truths as whimsically clever as they are poignantly perceptive.

The entire cast is excellent, and it’s clear that Craig is having the time of his life stepping back into Blanc’s comfortable shoes and twirling his signature cigar. Norton has a manic energy channeling his inner Elon Musk that’s invigorating; his clueless buffoonery is next-level sublime. Hahn, Odom Jr., Cline, and Henwick all make a lasting impression, while Bautista again shows he’s a comedic force of nature who should never be taken for granted.

Yet, make no mistake: Glass Onion is all about Monáe and Hudson. The latter channels the same type of manic pixie dream girl charm she brought to her Oscar-nominated role in Almost Famous. But the glamour is fading. The allure of a comforting smile and the captivating fluttering of an eyelash isn’t what it used to be. They conceal a withering reality, where time is an enemy and the thought of gracefully aging into obsolescence is beyond comprehension. Hudson is sinuously magnetic, delivering arguably the best performance of her career.

This makes what Monáe achieves as the understandably aggrieved Andi all the more impressive: a bewitching tour de force and a transformation unlike any I’ve seen in 2022. The way she slowly but surely begins to dominate the picture is glorious. Making it even better is how her castmates subtly stand aside to give their fellow actor room to shine, almost as if each understands that this is Monáe’s showcase, so it’s best to cede her the spotlight.

Much like Knives Out, Johnson has a lot on his mind. With Glass Onion, the filmmaker gets to dive headfirst into an assortment of hot topics dealing with everything from wealth inequality to climate change to corporate malfeasance to political extremism. Johnson knows how to deliver these messages with such ebullient panache that audiences likely won’t realize they’re being given civic and economic lessons until the messages to take root.

Netflix reportedly spent something like $400 million to make Benoit Blanc mysteries with Johnson, and a third chapter will undoubtedly be on the way sooner rather than later. Knives Out set an impossibly high bar. Glass Onion vaults over it with rhapsodic ease. Anyone who thinks Johnson isn’t capable of excelling to even greater heights in the future hasn’t been paying close enough attention. 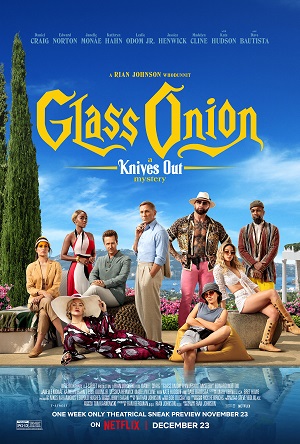