Aggressively Bleak Good Woman Easy to Fall in Love With

Abner Pastoll’s A Good Woman Is Hard to Find is a ruthless gut-punch of a drama featuring Sarah Bolger in a magnificent tour de force performance that blew me away. A kinetic, hard-hitting follow-up to his playful 2015 indie gem Road Games, the director’s latest is a show-stopping bit of pulp fiction that never loses its focus or attempts to minimize the sadistic terrors lurking in the shadows of the frame. This is one of the best motion pictures I’ve seen so far this year.

Sarah (Bolger) is a young, recently widowed single mother trying to maintain a sense of normalcy for her two young children after their father is murdered. Her eldest Ben (Rudy Doherty) was there when the crime happened and has been mute ever since. Her youngest Lucy (Macie McCauley) tends to cling to her mother as if she is quietly petrified Sarah will disappear if she were to let go.

Things take a chilling turn when local thug Tito (Andrew Simpson) bursts into the family’s house unannounced. He’s robbed a pair of murderous local mobster Leo Miller’s (Edward Hogg) drug-dealing goons, and he’s decided he’s going to hide his ill-gotten gains in Sarah’s bathroom with or without her permission. She knows how horrible an idea this is. She also knows it will get even worse if Miller were to discover Tito’s whereabouts.

Ronan Blaney’s (Don’t Go) script is sharp and to the point. It doesn’t mince words and it contains zero in the way of pointless fluff. The writer’s scenario immediately gets to the point, making clear the precariousness of Sarah’s position and cements early on why it is she can’t turn to local law enforcement for assistance. There is a specificity of focus that’s superb, the film maintaining a persuasive power that only grows in strength as events progress to their bloody conclusion.

Bolger is incredible. This is a forceful performance overflowing in a tired emotional exhaustion that would be tragically demoralizing if it were not also coupled with a pugnaciously protective resilience that helps give Sarah the energetic vitality to keep moving forward no matter how difficult doing so might be. She is a tigress protecting her cubs, and in her eyes I could always see the wheels turning round and round. Sarah isn’t the timidly grieving wallflower she initially appears to be, her intelligent ferocity hidden deep within as she tries to plot out her actions six or seven steps beyond anything anyone would be expecting from her.

Pastoll handles the intricacies of Blaney’s story with determined effortlessness. There’s an early scene where Sarah goes to the local police department to enquire as to the status of her husband’s murder case, and with practically zero dialogue I learned everything I needed to know about what was going on and why. Later, there’s an even better moment where Miller, who is skin-crawlingly good, has a spontaneously violent outburst where he brutalizes a pair of well-meaning interlopers attempting to stop him from nabbing Sarah. It’s shocking stuff, and if I didn’t quite understand why she was so terrified of this man before this confrontation I sure as heck did afterward.

Admittedly, there’s not a lot in the way of light or levity happening here. Unlike Road Games, Pastoll refuses to allow for anything close to resembling a breath of fresh air or a moment of lightheartedness to transpire. This is a movie that jangles the nerves right from the first blood-splattered shot and only works even harder to cut them into teeny tiny little ribbons from that point forward. It’s not easy to take, and if not for the introspective nuance and maternal complexity of Bolger’s performance I’m not entirely sure I’d have been willing to endure the sheer weight of the darkness, dread and heartbreak lurking at the heart Blaney’s screenplay.

But I embraced all of it. From Richard C Bell’s smoothly volatile cinematography to composer Matthew Pusti’s evocatively pulse-pounding score, every piece of Pastoll’s rambunctious thriller fit together with exquisite ease. A Good Woman Is Hard to Find is easy to love, and from its rough pugilistic edges to its unvarnished cutthroat emotions there’s not a single facet of it that I don’t want to stand up and applaud. 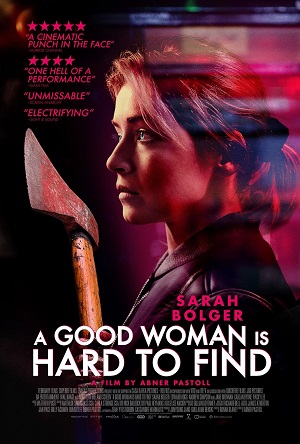