Halloween night. Haddonfield. Laurie Strode (Jamie Lee Curtis), her daughter Karen (Judy Greer) and granddaughter Allyson (Andi Matichak) have killed Michael Myers. They have left him to burn in the inferno Laurie had designed for the masked killer should he ever return to finish what he started 40 years prior. Rushing to the hospital, the trio is content in the knowledge that the nightmare that has haunted their family for three generations has finally been put to rest.

Or has it? Michael Myers is not so easily killed. After escaping Laurie’s trap, his night of carnage will continue. Spurred on by Tommy Doyle (Anthony Michael Hall), all of Haddonfield is up in arms. Their collective bloodlust has been unleashed, and with the Strode women hopefully leading them, the citizenry will end Michael’s reign of terror for good, no matter what the cost.

First things first: Halloween Kills is half a movie. Halloween Ends is set to hit theaters next October, and while it’s not like this series has ever been known for tidy endings — almost all of them have some sort of clever cliffhanger — the conclusion to this sequel to 2018’s critical and box office hit is purposefully ambiguous. There’s a lot left up in the air by the time the credits appear and refrains of John Carpenter’s unsettlingly classic theme fills the auditorium. I think it’s best viewers know this going in.

With that out of the way, director David Gordon Green and fellow screenwriter Scott Teems and Danny McBride do a fine job of continuing the story from the previous film. They’ve crafted a seriously deranged slasher that more than lives up to the “kills” in the title. The volume of grisly butchery is extreme, Michael taking out all of his silent rage on anyone and everyone foolish enough to get in his way.

I like that Green, Teems and McBride keep centering things on the Strodes and how this legacy of violent trauma has shaped and affected their lives. This time out a lot of the emotional heavy lifting falls to Karen and Allyson. Both mother and daughter are trying to comprehend what they’ve just lived through. They are also forced to try and deal with a mixture of anger and grief that’s threatening to overwhelm them as they wait for word on Laurie’s health while sitting in the hospital, surrounded by dumbstruck cops.

But this isn’t the only story going on. The other main subplot involves Tommy, as he riles up all of Haddonfield to pick up arms. He is joined by fellow survivors Lindsey Wallace and former Smith’s Grove Sanitarium nurse Marion Chambers — played by Halloween 1978 returnees Kyle Richards and Nancy Stephens — and the three of them inadvertently transform an entire town into a pack of wild animals.

Cycles of violence. Eye for an eye. Pain begetting pain. It seems pretty clear that these are the themes Green and his creative team are eager to explore this time out. Michael remains the unstoppable boogeyman. Now, however, it is the mob mentality — and all the evil that it can unleash — that maybe becomes an even greater threat to everyone’s safety.

I like these attempts at added depth, and I give Green props for wanting to expand the story in such a creative way (and one that allows him to bring back other members of the original Halloween cast, most notably Charles Cyphers as former sheriff Leigh Brackett). It’s very reminiscent of the original Frankenstein, so much so that while there aren’t any lit torches, a pitchfork does get into the action at a crucial point.

But there are issues, not the least of which is that non-ending ending. By the nature of her injuries sustained in the last film, Laurie is sidelined for the majority of the action, and while Curtis still has a few lovely moments, that her character is not nearly as involved this time is a minor problem. Laurie is still the beating heart of the franchise, so having her be on the mend so that far less interesting individuals can take her place for long stretches of the narrative is undeniably frustrating.

Then there is Michael. He’s still a beast and as terrifying as ever. But he’s approaching superhuman territory in this installment, and whether intentional or not, there are some heavy Cult of Thorn vibes going on. Fans of Halloween: The Curse of Michael Myers will know what I’m talking about. For everyone else, there’s a vaguely supernatural element at play that slightly decreases the scare quotient. While I’m sure that’s not the direction Green is going in, there are still hints that Michael is transforming into something demonic, and I can’t say I find the thought of that particularly interesting.

Not that I still didn’t enjoy myself. Halloween Kills knows how to jolt an audience into fits of giggly yelps of fright, and watching this iconic villain do his thing with such calmly calculated ferocity is oftentimes bone-chilling. I can’t wait to see how Green wraps things up next year, and here’s my hope that Laurie Strode’s final showdown with Michael Myers will be worth the wait. 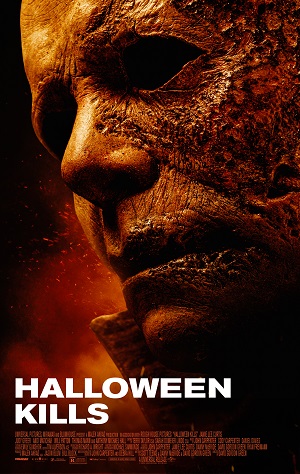