Nifty Haunt Scares Up a Labyrinth of Malevolent Tricks and Treats

Harper (Katie Stevens) isn’t interested in doing anything this Halloween. She’s ready to break free of her abusively drunken lout of a boyfriend, so going out and partying with her roommate Bailey (Lauryn Alisa McClain) doesn’t feel like a great idea. But Harper is convinced to join in the evening’s frivolities anyhow, and even though she declines to wear a costume that doesn’t mean that, eventually, she’ll be ready for whatever the night has to offer.

Or maybe not. Harper and Bailey are joined by friends Angela (Shazi Raja), Mallory (Schuyler Helford), Nathan (Will Brittain) and Evan (Andrew Caldwell), and after things at a downtown club grow boring, the group decides to go find a decent haunt (a.k.a. a haunted house in an industrial setting) and experience a couple Halloween scares. The one they choose is decidedly off the beaten path. But the warehouse setup is suitably ominous and the guy out front getting attendees to sign safety waivers while collecting their cellphones is beyond creepy. Harper and her pals decide to give the place a shot, and in the process enter inside a macabre, blood-curdling labyrinth whose thrills and chills might be far more lethally literal than anything the six college students are ready to deal with.

If this were a normal haunt than the latest feature from A Quiet Place writers Scott Beck and Bryan Woods likely wouldn’t be particularly interesting. But as it is anything but normal, the pair’s directorial sojourn Haunt ends up being a well-plotted, suitably sinister little shocker that proves to pack an agreeably malevolent little punch. Even if their scenario isn’t exactly original (last year’s Hell Fest was just the most recent flick I can think of to tread down a somewhat similar path), the duo still craft a successful motion picture that knows what it is doing, doesn’t insult the intelligence of its audience and never overstays its welcome. While not much happens that is unexpected, watching Harper and her friends battle for their lives against a bloodthirsty adversary is still a heck of a lot of fun, Beck and Woods manufacturing an atmosphere of apprehension and dread that kept my eyes glued to the screen for all 92 freewheeling minutes of the movie’s running time.

I like that the filmmakers aren’t afraid to take their time setting up their scenario and fleshing out their characters, while in the same breath are also eager to get right to the unnerving carnage not too soon after the six college kids step inside the not-so-faux haunted warehouse. Harper, Nathan, Bailey and to a lesser extent Evan mange to make just enough of an impression that their life or death journey through this lethal industrial maze actually meant something to me. As for Angela and Mallory, while they aren’t given very much room to resonate, Raja and Helford play their parts with just enough pizzazz I wasn’t that upset that Beck and Woods failed to give them as much to do as they did their costars. Most importantly, Stevens makes Harper a plucky heroine worth rooting for. I liked how much fragile emotional honesty she brought to her performance, her character a pleasantly vivacious “final girl” who isn’t meek to get her hands dirty when the situation suddenly calls for her to do so.

It’s all a little too straightforward, and after it becomes apparent to all six characters something horrible is going on I can’t say the filmmakers do much to conceal that there are really only a couple of destinations their overall story can finish up at. There’s also a lame and convenient subplot concerning Harper’s much talked about boyfriend that would be annoying if not for the belligerent brutality Beck and Woods unleash when they abruptly bring it to conclusion. But overall I like that the pair never really explain the reasons why the ghouls running the haunt are so murderously inclined, and the fact it is never clear whether or not there’s a supernatural element to all of this adds an aura of uncertainty I found suitably unsettling. The directors also make the most out of production designer Austin Gorg’s claustrophobically minimalistic sets, cinematographer Ryan Samul’s (We Are What We Are) camera navigating the cluttered nooks and crannies of this spooky environment with spirited aplomb.

Is the film great? Heck no. Is it incredibly entertaining? Unequivocally yes. I had a sensational time watching Harper and her gang run for their lives, and while I could nitpick much of what happens to proverbial death, the whole film is just such gleefully unapologetic horrific fun I can’t work up the desire to try and do it. Beck and Woods have made a nice little genre gem with Haunt, and I look forward to picking this one up for my personal library so I can revel in all its nifty tricks and treats again relatively soon. 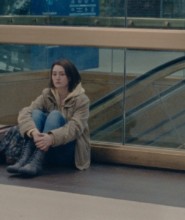 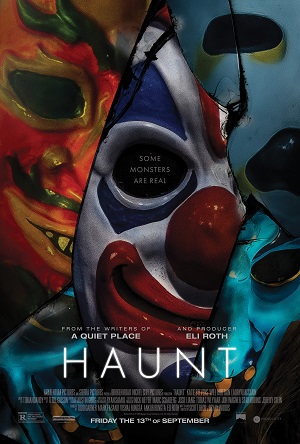