His House is not your prototypical haunted house tale. Working from an original story by Felicity Evans and Toby Venables, writer/director Remi Weekes has delivered a powerful and thought-provoking immigration thriller that proves in its second half that it has far more on its mind than delivering a few well-crafted thrills and chills. It is a masterfully measured tale of tragedy, triumph, survival and guilt, all of it cleverly concealed inside a slick genre funhouse where what is shown up on the screen is rarely (if ever) what it appears to be.

Refugees from a bloody conflict ripping apart South Sudan, a determined husband (Ṣọpẹ́ Dìrísù) and his cautious wife (Wunmi Mosaku) have made it to Great Britain and are eager to start their lives fresh. This is difficult, not only because of the complex nature of current British politics, but also due to the fact they are reeling from the death of their child during the chaotic escape from their homeland. But the agent (Matt Smith) in charge of their case has high hopes the two can assimilate, especially as they’ve hit the jackpot as far as the government-assigned home they must reside at for the next year is concerned.

Things do not go smoothly for the Sudanese couple. There’s a reason this house has laid vacant and why the government can assign it to them, and in no time at all the husband becomes certain that there is a supernatural presence lurking within the walls. He begins to tear away at the rotting drywall, searching for an answer to the ominous happenings that transpire throughout the night and make sleep an impossibility.

It is here that Weekes makes a rather sly change in direction. Facets of this setup are a clever red herring. Not the couple’s travails as they deal with the governmental regulations monitoring their every move or the glares constantly being sent their way from other members of their neighborhood. All of that is very real. But the supernatural aspect? The events slowly driving the husband mad and causing the wife to wonder if all these hardships are worth the unimaginable cost of fleeing Sudan? These elements go places I never could have anticipated, Weekes slyly crafting an eloquently human tragedy that hits the heart like a sledgehammer.

The transition between ghost story and ghosts-of-the-recent-past story isn’t entirely successful. The shift in tone is rather abrupt, the realization that what is happening to this duo has more to do with their flight from Sudan than it does with anything happening inside the house coming with a jarring suddenness that’s a bit too noticeable for my taste. It also dilutes the aura of overwhelming terror that rains down upon the first third of the picture, considerably reducing the inherent suspense of the pair’s situation in the process.

Yet, this is hardly an item to be annoyed or frustrated with. Or, more to the point, at least not for very long. Once the painful human drama of what these two went through to escape the deadly situation ripping their former country to shreds is disclosed, the effect it had upon me was like a horrifying punch to the gut. This becomes a survival tale, a saga of sacrifice and resilience, one littered with decisions good, bad and next to unforgivable. The choices they make to escape Sudan are ones no person should ever be put in the position to ponder let alone actually act upon, the presence in their new house the price they are forced to pay for making it to Great Britain alive.

There are aspects of what happens that I cannot talk about. Reveals during the second half are delivered slowly, authentically and with unnerving precision. Before I even realized what was happening I discovered I was choking back tears, desperately trying to remain composed as the truth of the situation for these immigrants is unmasked in all its bleakly shocking clarity. Weekes fills the screen with a collection of deeply upsetting yet bracingly genuine images that do more to frighten than any ghoul or ghost inhabiting their dilapidated new home ever could.

Dìrísù and Mosaku are outstanding, the latter in particular. The actress has a stupendous sequence where she gets lost on the way to the medical clinic, encountering a group of Black teens she wrongly assumes will be happy to help her find her destination. But they’re just as brashly xenophobic as the white residents in their neighborhood are, and the look of crushed mortified embarrassment that slowly washes across her face is heartbreaking. Mosaku’s performance fearlessly builds in complexity from there, her scenes during the final act flawless in their emotional transparency.

Weekes’ feature-length debut is excellent. Its themes are universal, and how it analyzes a myriad of topics ranging from immigration to genocide to any number of additional subjects in-between are extraordinary. While shifts in tone are noticeable, they ultimately do not distract from the motion picture as a whole. His House is something special, the line between forgiveness and punishment an ethereal enigma that’s as haunting as it is imperceptible. 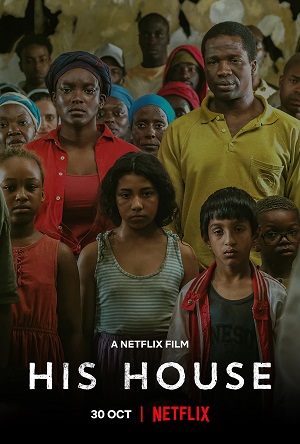