Freshly single Emergency Room doctor and mother Sarah (Elizabeth Shue) has moved into a secluded upscale neighborhood with her headstrong and intelligent 17-year-old daughter Elissa (Jennifer Lawrence). The pair hope this change of scenery will help repair their fractured relationship. Their new home is gigantic, and neither can believe their good fortune that they were able to afford the rent on such a gorgeous property.

The reason for this is quite simple. It has everything to do with the house across the street. Years ago, a young girl murdered her parents and then disappeared into the woods, her ghost purported to be haunting the neighborhood, while the home itself brings down property values much to the consternation of the neighborhood’s residents.

But owner, and only surviving member of the family, Ryan (Max Thieriot) won’t sell. He’s rebuilding the house while also attending classes at the local community college. Ryan wants to become a psychologist and help those on the edge like his sister. No one in town trusts him, and it worries Sarah when Elissa takes it upon herself to befriend the young loner.

The great thing about House at the End of the Street is that it surprised me. About halfway through it reshuffles its deck chairs in a way that caught me off-guard yet still made perfect sense and didn’t feel overly contrived. The film earns this twist. It doesn’t come out of the blue, and in the process helps give the characters inhabiting this story an emotional kick in the pants I was moderately impressed with.

Unfortunately, those deck chairs happen to be sitting atop a sinking ship. As I appreciated the attempt to make this tale more than the sum of its relatively familiar things-that-go-bump-in-the-night parts, the final 20 minutes are so absurdly cliché and anticlimactic any goodwill generated by the first half is immediately erased. The last act is so head-slapping in its awfulness, so annoying in its idiocy, the cumulative effect is infuriating, and what could have been a niftily entertaining B-horror thriller sadly becomes a frustratingly mundane missed opportunity.

Until then, however, director Mark Tonderai (Hush) and screenwriter David Loucka (Dream House), working from an original story by Breakdown and U-571 filmmaker Jonathan Mostow, do a decent job of building character, creating atmosphere and generating a compellingly creepy vibe. Elissa and Sarah aren’t exactly groundbreaking characters, but that doesn’t mean the actors still don’t make a valiant attempt to make them more than that. There is passion fueling many of the performances, both Lawrence and Shue giving far more of themselves to the production than it ultimately gives back to them.

But there are relatively minor problems throughout. Most don’t mean much in and of themselves, but when added together they collectively start to drag the proceedings down. By the time a group of teenagers at Elissa’s high school start going full-on Straw Dogs crazy on Ryan I almost wanted to give up on the picture right then and there, the whole section a mind-numbing excursion into a cuckoo form of dimwitted cinematic la la land that had me silently fuming in my theatre seat.

It gets worse. The last moments are standard cat-and-mouse horror tropes one right after the other, Tonderai and Loucka wasting an inspired setup by turning towards a bunch of hack-and-slash platitudes that simply do not work. The ending feels like it was stolen from some parody of a horror movie, everything from the music cues, to the sound effects, to the camera angles, to the bug-eyed performances reeking of careless ineptitude.

I can’t help but wonder what differences there were between Mostow’s original story and the script Loucka concocted out them. Did it, too, go wildly off the rails during the last act? Or did the screenwriter, or maybe a producer or someone else at the studio, come in with notes saying that they needed to steer things back into more conventional territory?

Not that it matters. Early on House at the End of the Street had me intrigued. By the midsection I was completely captivated by it. But by the end? By that point I was ready to throw things at the screen and howl my disapproval at how wildly off the rails this Hitchcockian enterprise in suspense and terror had suddenly become. The movie ends up as a colossal waste of time, and because of that I don’t think there’s anything more to say. 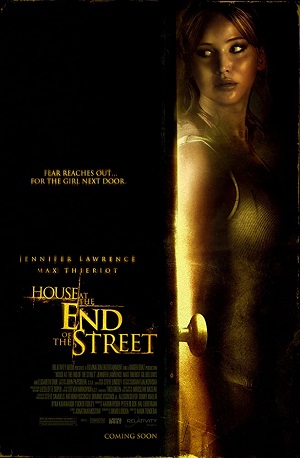