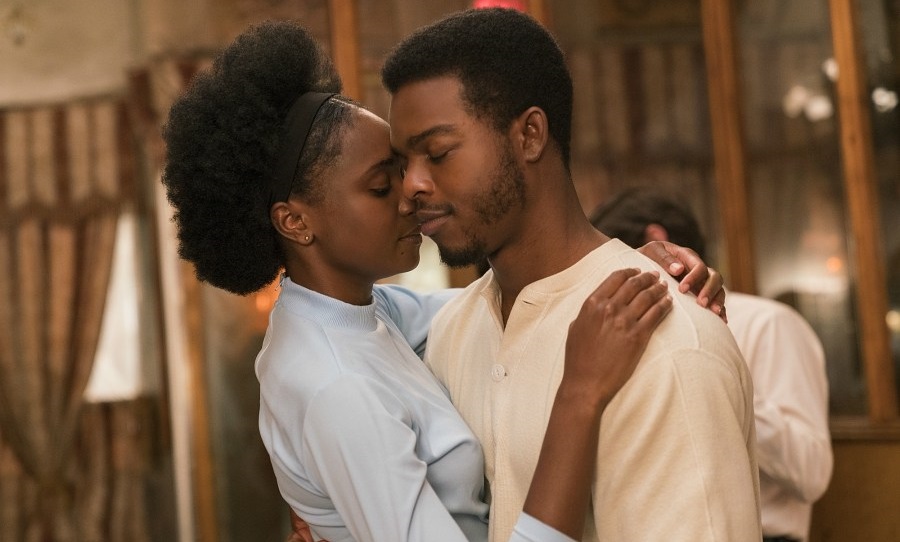 Childhood sweethearts Tish Rivers (KiKi Layne) and Alonzo ‘Fonny’ Hunt (Stephan James) are going to get married. It is the 1970s and they have grown up together with their respective families in Harlem, living their lives together like so many other Black families in their community have done for as long as any of them can remember. But just as the pair are looking to get their first apartment together as a couple, Fonny is arrested for committing a heinous crime, and even though it isn’t possible for him to have done the deed all the evidence authorities are using against him at trial still points in his direction. 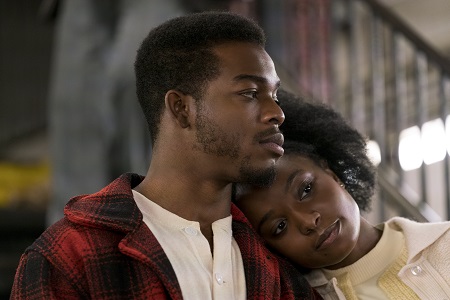 Complicating matters is the fact Tish is pregnant. She’s worried about telling her family, especially parents Sharon (Regina King) and Joseph (Colman Domingo). But as shocked as they all are they still embrace their daughter with tenderness and love, inviting Fonny’s parents (Michael Beach, Aunjanue Ellis) and his sister Adrienne (Ebony Obsidian) into their home to share the good news. While the fathers bond the mothers fight, all the while Tish sits there wondering what is going to happen next, and even if they’re not all in complete agreement about the merits of the young woman’s pregnancy, they all remain determined to do whatever they can to see that justice is done and Fonny’s innocence is proven.

Based on James Baldwin’s lyrically haunting masterpiece If Beale Street Could Talk, writer/director Barry Jenkins’ adaptation is a masterfully assured, elegantly composed drama that sifts through time and space like an observational dream of happiness and amity sitting on the razor’s edge of transforming into a tragic nightmare. The Academy Award-winning filmmaker’s follow-up to Moonlight is a stunning bit of romantic remembrance that fearlessly cuts through the bull and instead leaves viewers with the hardened, not always pleasant truth no matter what the consequences of stating it so bluntly might be. And yet, the optimistic ebullience of a community striving to do better, longing to embrace love over anger, hope over fear, all of that is palpable, and even if every obstacle can’t be overcome, the idea that a better future might still be around the corner is still present nonetheless.

There’s plenty to unpack, Jenkins attempting as best he can to streamline Baldwin’s supposedly unfilmable novel in ways that make its core narrative easy to follow but still do not lose the lyrically angry poetry the author utilized to such punchy, thought-provoking perfection. If he’s not always successful it isn’t for lack of ambition. Even so, some scenes between the two fathers feel shoehorned into the proceedings even if they’re still integral to assisting in the attempt to raising the necessary funds required to finance Fonny’s defense. Where Domingo is a towering presence, full of righteous indignation and selfless benevolence, the equally talented Beach gets somewhat pushed into the background never making the same sort of impact his co-star does.

But this is a minor problem as far as the larger picture is concerned. Tish and Fonny’s romance is stunning, Layne and James delivering performances of such emotive exactitude the ins and outs of their relationship are always clear. The film is bookended by a pair of scenes where the young woman visits her fiancé in prison while he’s awaiting trial, the two actors transforming themselves in ways that go beyond the obvious physical manifestations of the travails and hardships they’ve each been suffering under. Yet as damaged and as withered as each in their own way is, the genuine adoration they feel for one another is never a question, Layne and James finding a way to make the purity of their love break through the insane tragedy of their situation with crystalline purity. 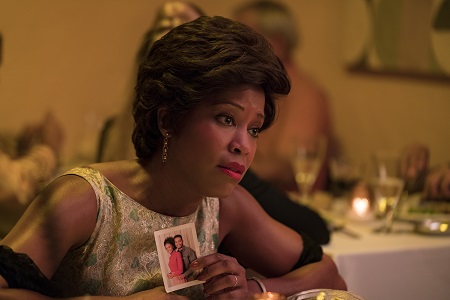 Then there is King. The veteran character actress delivers one of the finest turns of her career as well as one of the best performances of 2018. There is a subplot where Sharon heads to Puerto Rico in order to find someone key to Fonny’s defense. While there King sparkles in a series of scenes where the determined wife and mother discovers the interior strength to do what frustratingly will likely prove to be impossible. Yet she does not give in, does not give up, facing each obstacle laid in her path with a raw, naked candor that cuts to the horrific truth of the situation with razor-sharp specificity. It all culminates with a scene between King and actress Emily Rios that is a firestorm of human feeling and internalized dread, their rage and uncertainty leaping off the screen and burying itself into the center of my soul making this moment an important microcosm of the American experience that’s extraordinary.

There’s so much more I want to single out for praise, not the least of which is cinematographer James Laxton’s (Camp X-Ray) deftly lithe camerawork, Joi McMillon (Lemon) and Nat Sanders’ (Short Term 12) meticulous editing, Mark Friedberg’s (Wonderstruck) exquisite production design and Caroline Eselin’s (The Hollars) suitably lived-in costumes. Best of all is Nicholas Britell’s (Battle of the Sexes) jazzy, melancholically radiant score, his assortment of musical queues adding an evocative veneer to the proceedings that’s sublime. Jenkins handles all of these technical aspects with such astute candor it augments the various themes at the heart of Baldwin’s prose in ways that are electrifyingly vivacious, the final knock-out punch delivered with such care and understanding it’s like being delicately kissed with affectionate sincerity by the righthand hook of a heavyweight champion.

I want to add more. I want to talk about many of the shorter scenes, the little moments where each character lives their respective lives in an attempt to make the most of the situation they’re currently in no matter what demons and dangers might be waiting for them right around the corner. But the majesty of If Beale Street Could Talk is in the mystifying discoveries Jenkins asks the viewers to make on their own. In the end this is a glorious treatise on more than just race in America, more than a dissertation on wealth, privilege and gender inequalities and what individuals and families go through in order to conquer them. It is an examination of who we are as a society, the best and worst of our tendencies all shimmering through in one way or another as this story of love, tragedy and family plays out to conclusion. This movie is a marvel. See it at once. 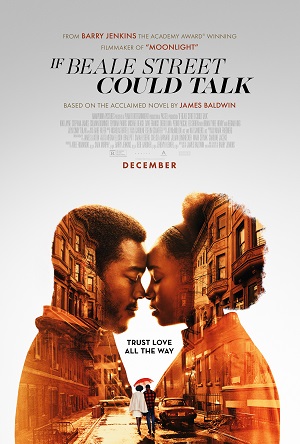