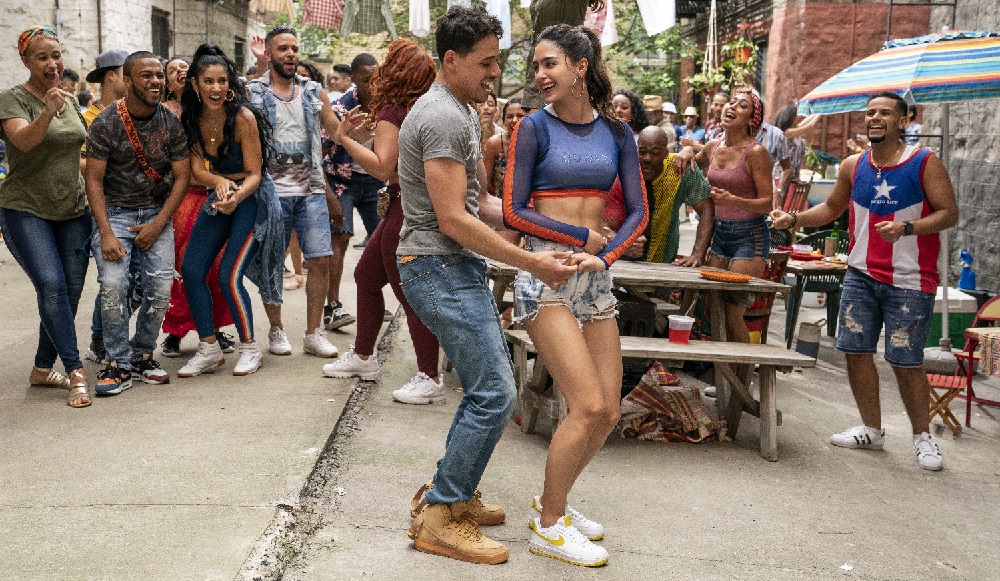 In the Heights a Rhapsodic Musical Celebration

These are just four of the people who make Washington Heights a vibrant community overflowing in laughter and song. Usnavi sees it all, narrating a story of longing, regret, hope and family while at the same time openly stating he’s going to leave it all behind just as soon as he can afford to do so. His is a universal story yet one that also speaks of cultural touchstones which are unique to his and his family’s heritage and background. It is a tale of life lived to the fullest, even if Usnavi doesn’t initially realize that to be the case, making all he experiences and sings about as American as that proverbial Apple Pie.

Adapted from the Tony Award-winning smash Broadway musical written and conceived by Lin-Manuel Miranda and Quiara Alegría Hudes, In the Heights is a joyously rhapsodic spectacle that deserves to be viewed on the biggest screen available. Directed by Jon M. Chu (Crazy Rich Asians) and with a screenplay written by Hudes, this is an epic celebration of humanity I’ll be thinking about for the remainder of 2021.

There are a lot of characters allowed to take up residence in the spotlight, and not just the ones I’ve already mentioned. Amongst the major principals, we’ve also got Abuela Claudia (Olga Merediz), the community grandmother who treats everyone living in Washington Heights as if they were her biological children. There’s 14-year-old Sonny (Gregory Diaz IV), a hyperactive firebrand working in Usnavi’s store. Finally, there’s Vanessa (Melissa Barrera), working at the local salon while harboring aspirations to become a major fashion designer.

It’s a lot to keep track of, especially when there is also a surplus of secondary players who frequently take charge of the singing and dancing. But Chu keeps the focus on this disparate group, Usnavi taking charge of telling all of their interconnected tales with lyrically poetic precision. This gives the film a rat-a-tat-tat urgency that allows all 143 minutes of it to fly by with rhythmically astonishing speed. I was never bored, and even if the conclusion to all of this constant pitter-patter of feet was unavoidably obvious, that didn’t make watching events transpire any less entertaining.

I do have a few issues, and they’re not entirely minor. While Chu handles a few of the many musical numbers splendidly, there are numerous instances where the director and his editor Myron Kerstein (Garden State) overcut to the point where things become something of a distracting visual blur. The dazzling choreography and cinematographer Alice Brooks’s (Jem and the Holograms) precise framing of these sequences are hopelessly distorted, my overall satisfaction somewhat hampered because of this.

There are exceptions, and they are notable. The first is a third act stunner featuring Hawkins and Grace as they dance up and down the side of a brownstone apartment complex, vaulting over fire escapes as if they were both dueling Fred Astaires gliding across a ceiling à la Royal Wedding. Both actors are spellbinding, while Chu’s direction and Brooks’s visual ingenuity are pretty much perfect.

But it is a moment transpiring near the midpoint that is even more extraordinary. The fabled and ballyhooed “Alabanza” number, one of the Broadway production’s most celebrated moments, makes the transition from stage to screen brilliantly. Chu centralizes things squarely on Merediz, and the Tony-nominated actress rises to the occasion. The level of emotional complexity she conveys is out of this world, and by the time her song was over I’d gone through four or five tissues mopping up a flood of tears.

This is where In the Heights excels. It gets under its characters’ skins. It allows them to pop off the screen and take up residence right at the center of our hearts. Chu gives them lives that go beyond these brief snapshots we’re so thankful and blessed to become a part of. He makes the Broadway musical blissfully cinematic yet retains that deeply affecting intimacy that’s oftentimes found watching a theatrical production. I feel like I’ll be singing this adaptation’s praises for quite some time. I am equally certain I will be far from the only one doing it. 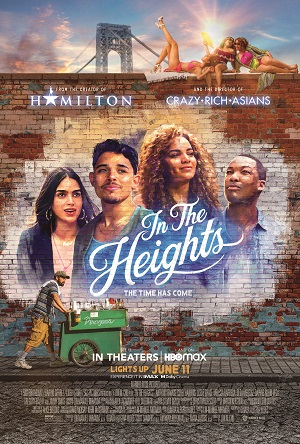