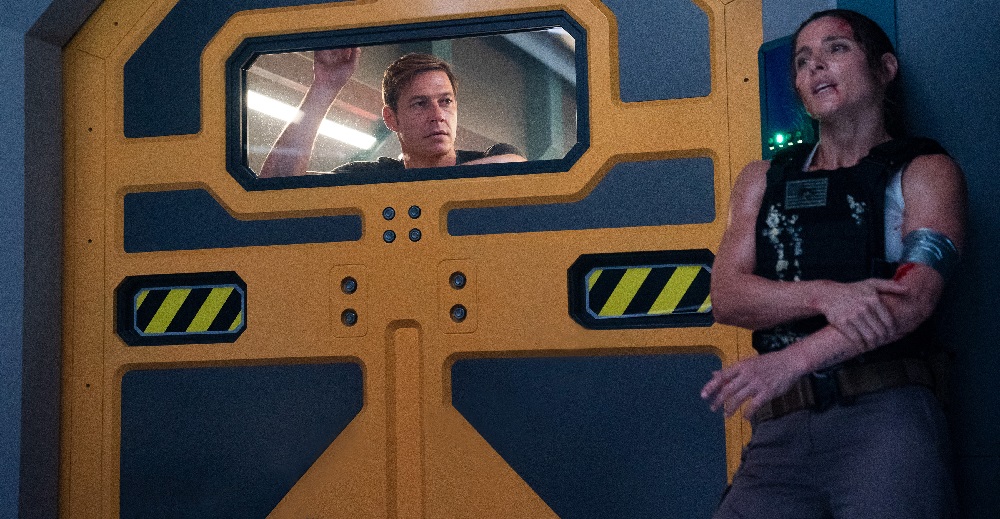 On the same day Army Captain JJ Collins (Elsa Pataky) arrives at a nuclear missile interceptor base located somewhere in the Pacific Ocean, a team of hardened mercenaries, led by psychotic former U.S. military intelligence officer Alexander Kessel (Luke Bracey), attempt to take over the facility. She is locked inside the control center with Corporal Rahul Shah (Mayen Mehta), the duo the last line of defense against Kessel and his gunmen.

A Die Hard clone set inside a top-secret military installation that’s the last line of defense against Russian nuclear aggression, high-octane actioner Interceptor is a waste of time. Poorly paced and blandly plotted, featuring a toothless villain supported by a cadre of nincompoops who, with rare exception, are faceless bits of cannon fodder for the heroine to indifferently dispatch, this film so rarely hits the mark its ineptitude is almost impressive.

Pataky, best known for being a small part of the Fast and Furious ensemble beginning with Fast Five before being unceremoniously dispatched in The Fate of the Furious, deserves better. She looks like a star. She moves like an action heroine. There is a noticeable sparkle showcasing a focused intensity burning within her eyes that suits her character perfectly.

But Pataky is undone by the dialogue, her lack of chemistry with Bracey, what had to have been a minuscule production budget, and the almost indifferent way director Matthew Reilly stages things. There is no fluidity to the camerawork, and the way events are edited together is perfunctory in the better moments, aggressively haphazard in the worst of them.

It also does not help that the backstory, a ham-fisted attempt at social relevancy dealing with sexual impropriety in the military during the #MeToo era, is so blatantly didactic and heavy-handed that any chance this commentary may have had to successfully register with the viewer never materializes. These flashbacks feel like they were crafted for a corporate training video on how to spot and report abuse, not a fast-paced thriller with intimately choreographed fight sequences and a plot centered on smacking nuclear missiles out of the sky with high-tech rockets.

There are a couple of nifty one-on-one fight scenes between Captain Collins and a pair of lethal killers. The first comes out of nowhere as an assailant literally explodes into the control room from out of nowhere. The second isn’t as surprising, as it comes right after the heroine turns the tables on Kessel after he’s briefly gained the upper hand, the officer forcing him back outside the control room before dealing with his one remaining minion.

Even these are slightly maddening, however, as they are edited in a way that tends to make the fisticuffs visually unappealing and obnoxiously choppy. Still, these sequences do have an energetic vitality the rest of the movie lacks. Pataky looks good handling the fight choreography, and the two actors she’s facing off against have a lethally lithe athleticism that helps generate at least a small modicum of suspense.

But that’s about it for positives. Bracey is about as threatening as a goldfish flopping on a kitchen countertop struggling to breathe. Kessel is supposed to be this psychologically manipulative bad ass who, like a master tactician, has spent six years planning for every contingency, including the presence of Captain Collins. But he’s so ineffectual and inept at dealing with her that believing he’s some sort of crazed homicidal genius isn’t possible. Worse, Bracey looks like he’d rather be anywhere else than in this motion picture, and his apparent bored indifference is frustratingly contagious.

I don’t have the energy to say much more. One of the film’s high-profile, magic hammer-wielding executive producers has an extended cameo, and their electrifying comical exuberance did bring a smile to my face. Additionally, I would love for Pataky to get another chance to anchor an action flick, and I do hope this misfire doesn’t derail any future opportunities. But Interceptor isn’t good, and the fact I managed to sit through 96-minutes of the darn thing without bailing halfway through is some sort of minor miracle. 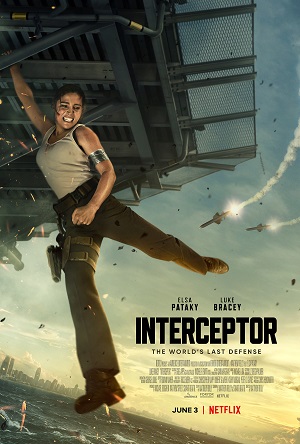