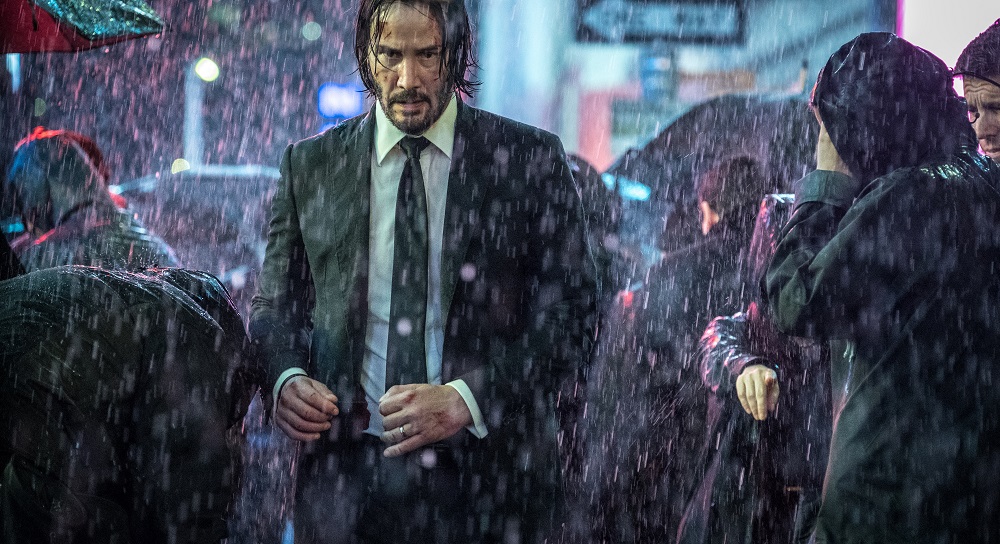 John Wick (Keanu Reeves) is on the run. He’s been declared excommunicado by the High Table. All services from the Continental or anyone associated with the establishment are no longer welcome to him. He also has a $14-million price on his head, and every hour he remains alive the amount goes up exponentially. All of which means that John, even with his lethal skills, no matter how much fear his name sparks when it is uttered aloud, isn’t long for this world, and unless he finds his way back into the good graces of the powers controlling the High Table he will join his beloved wife, as well as the puppy she gifted him on her deathbed, in an early grave.

Picking up immediately after the events of John Wick: Chapter 2, the exhilaratingly violent John Wick: Chapter 3 – Parabellum continues to expand and deepen the crazy mythology of a secret society of assassins and the elite hotels that cater to them in a wide variety of unexpected ways. It is also one of the more explosively imaginative and dynamically entertaining action films in recent memory, returning director Chad Stahelski and his crack team of elite stunt performers delivering sights that frequently defy belief. While arguably the weakest overall film in the franchise from a storytelling perspective (we’ve got four credited screenwriters this time, including original scribe Derek Kolstad), this third entry is nonetheless a wonder to behold. It’s pretty darn incredible, and even with the sequel’s more obvious flaws and shortcomings I still find that I pretty much loved every single solitary second of it.

This is a movie that quite literally runs out of the starting gate, John and his new dog sprinting through the streets of New York as his hour grace period before the entire world is allowed to hunt him down like a wild animal comes to an end. There is a brutal fight in the Public Library where he takes down a killer with nothing more than a book, while the extended sequence after that features a bevy of martial arts impresarios battling the assassin inside an Asian antique shop utilizing a variety of sharp-edged weaponry sitting in various glass display cases. All this happens within the first 30 minutes and it only gets increasingly insane from there, John ultimately making his way to the desert city of Casablanca in hopes of finding an ally who could help him get out of his current predicament.

While the plot is fairly simplistic, I still find it easy to say too much and potentially ruin the cacophony of wonders Stahelski and the writers have in store for the audience. It can be said that actors Ian McShane, Lance Reddick, Laurence Fishburne and Randall Duk Kim reprise their roles from the previous films, while newcomers like Asia Kate Dillon (as an adjudicator with the power to shut down the Continental’s New York location), Oscar-winner Angelica Huston (as a Russian enforcer who has known John long before he became branded in the criminal underworld as “The Boogeyman”) and Mark Dacascos (as an elite hired gun the High Table only turns to in the most critical of situations) make unforgettable impressions upon the ongoing story. Best of all is Halle Berry as a former killer who owes a debt to John Wick, she and her pair of well-trained Belgian Malinois having to decide whether or not it’s in their best interest if they lend a helping hand to the excommunicated assassin.

While this series has always been fine allowing humor into the proceeding, there is a level of knowing wink-wink-nod-nod this time that wasn’t as obvious in the prior installments. It mostly works, but there is a danger that these films could become something akin to a parody of themselves if the filmmakers aren’t careful. Additionally, things become needlessly convoluted, John’s return to New York for the climax happening in a roundabout sort of way that feels far more contrived than it probably should be.

But the action remains topnotch, each key sequence surpassing the one before it. A Casablanca melee featuring John teaming up with someone to escape a High Table compound is magnificent, while the entire climactic throwdown inside the walls of the New York Continental location is an outright stunner that builds in tense magnificence as it moves along to its final confrontation. It is here that Reeves and Dacascos finally face off against one another and the moment is well worth the wait, the two action stars going absolutely ballistic as their characters do everything and anything it takes to gain the upper hand against one another.

I’m not sure I actually liked the semi-cliffhanger coda, the setup for an eventual fourth chapter feeling slightly forced and moderately nonsensical, even more so than the one that came at the end of the second film. But once again Reeves proves he is nothing less than perfect as the title character, while Stahelski continues to cement himself as one of the great action directors working today (even if one motorcycle set piece does feel slightly lifted from 2017’s Korean hit The Villainess), and if his remake of cult favorite Highlander ever gets made I guarantee I’ll be first in line to see it opening day. All-in-all John Wick: Chapter 3 – Parabellum is a highflying ballet of bloodshed and carnage that’s altogether remarkable, the adrenaline rush I got while watching it a euphoric high I wish I could bottle and sell at the neighborhood store. 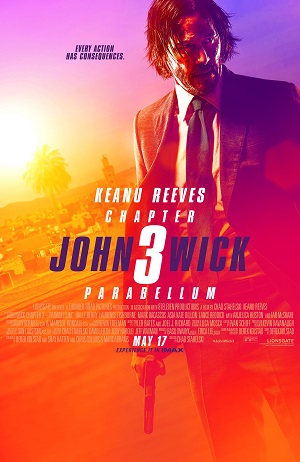