It’s been eight months since professional assassin Jay (Neil Maskell) has booked a job. After a disastrous outing in Kiev, it doesn’t seem like anyone is willing to take a chance on him, and as talented as he is it is beginning to look like he might never work again. His wife Shel (MyAnna Buring), a former Army Special Forces operative who spent time in Afghanistan, is tired of her husband’s constant moping. He’s got a family to support, and with medical bills piling up and a young son to feed she needs him to find some work.

When his former partner Gal (Michael Smiley) comes over for dinner with a new girlfriend (Emma Fryer) and a new multi-target assignment in his pocket, Jay is hardly in a position to turn him down. The two are charged with ending the lives of the people on a list handed to them by a mysterious benefactor, and while each one seemingly deserves to be killed, their calm happiness when Jay pulls the trigger is a bewildering shock. As thing progress the hitman becomes convinced something sinister is at play, something puts both Shel and his son in harm’s way. But the list must be completed, there is no turning back, and the closer Jay comes to silencing the last target the clearer it becomes he’s been the one with crosshairs on his temple all along.

Co-writer and director Ben Wheatley’s Kill List is a sly and altogether unsettling follow-up to his relatively successful Down Terrace. At first look this story appears as if it is going to play in that same underworld milieu of a mid-level crime drama, the movie subtly morphing its way into becoming something completely different as it goes along, building to an unnerving climax that is uncompromising in its tragic brutality. It all comes off as a slickly conceived combination of Stephen Frears’ The Hit and Robin Hardy’s The Wicker Man (the one with Edward Woodward, not Nicolas Cage), this devious little thriller a horrific sojourn into the unknown I found nothing less than spellbinding.

After about 30 minutes Wheatley had me completely under his thumb, slowly burrowing me deeper and deeper into my seat as things got even more surreal. He pokes and prods, tilts the viewer sideways, he and fellow writer Amy Jump making things as obtuse and as weird as possible while still maintaining focus on character development at the same time. It’s a neat trick, and while the eventual outcome didn’t catch me entirely by surprise I was still unsettled enough by what happened I had to leave all the lights on in my apartment for a good hour afterward.

What I liked most is how the clues for what is happening and for what eventually will take place are nicely littered throughout. Some are obvious (Gal’s date ominously retiring to the bathroom to carve some sort of symbol on the back of Jay and Shel’s mirror) while others take a little more work to make out. But, make no mistake, they are all there, and by the time a sinister cult of Pagan-like semi-naked worshipers appear the impact is more disturbingly freakish than it is a surprise.

The movie does take a minute or two to find its footing, and the opening scenes between Jay and Shel are moderately annoying. But these snippets of marital discord are vitally important to climatic events, everything that happens during that first half hour key towards making the impact of the last scene all the more devastating.

Wheatley is quickly becoming a top-tier director. The way he is able to bend genres, his gift with setting atmosphere and his ability to not let a quick pace strip anything away from the development of the characters are all outstanding. Kill List isn’t an easy film to categorize, to put into a mass-market box general audiences will quickly recognize. But it gets the job done and then some, and as an excursion into debilitating emotional-based familial terror I doubt we’ll see its like at any point throughout the rest of 2012. 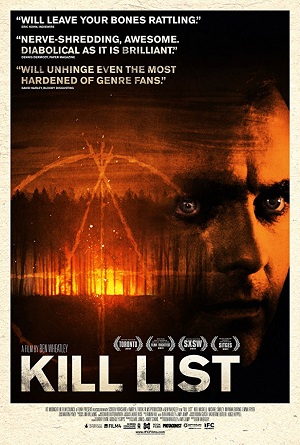