Andrew Briggman (Nat Wolff) is ready to serve. It is 2009 and he has come to Afghanistan’s Kandahar Valley to do his part in the war against terror. His unit, led by Staff Sgt. Deeks (Alexander Skarsgård), is an elite group that is seemingly always ready to get right in the middle of the action. But it soon becomes clear that, under the direction and tutelage of their commanding officer, Briggman’s team is secretly killing innocent Afghan civilians under the guise of rooting out insurgents and uncovering stores of hidden explosives.

The young soldier isn’t sure what he should do. The men in his unit have become like brothers to him. Deeks has a calmingly charismatic appeal that’s almost parental in its magnetism, and it’s not hard to see how fighting men like the guys under his command could so quickly fall under his spell. At the same time, what is happening is undeniably wrong. Briggman knows he needs to report it, but unsure who to trust he keeps this secret, the corrosive power of Deeks’ influence seemingly more far-reaching than anything he believes he on his own is capable of dealing with.

The Kill Team is a narrative variation on writer/director Dan Krauss’ award-winning 2013 documentary of the same name. The events depicted happened, and overall the film plays like some sort of dramatic procedural prequel to its nonfiction predecessor. But while Skarsgård is electrically terrifying, delivering an extraordinary performance that’s full of numerous little quirks and subtle nuances that all help make Deeks a magnificent villainous presence, the remainder of the movie is oddly emotionally inert. Wolf never rises to the same level as his co-star, and because of that I never became intimately involved with Briggman’s moral crisis of conscience. While Krauss does a solid job constructing a tale full of complex questions that have plenty of uncomforting and unpleasant answers, there’s still something about this feature that kept me at arm’s length, and even at only a scant 87 minutes it had difficulty maintaining my interest all the way through to the end.

Not that this isn’t a handsomely mounted and technically precise motion picture. It’s obvious Krauss has a feel for this story, not that this is much of a surprise considering he helmed the documentary chronicling much of the same material. He does a good job of setting the mood and making the viewer feel almost as if their boots are on the Afghan ground right alongside Briggman and his team. There is a you-are-there element to this drama that’s engagingly disconcerting, and at least initially I was truly intrigued to see how the dynamics of this military unit would end up shaping the larger narrative and just how Deeks’ influence could transform a ragtag group of hungry, idealistically patriotic soldiers into cold-blooded killers willing to turn on one another if doing so meant saving their own hides.

But as inherently fascinating as all of this might be there is still a coldly inert taciturnity that I had a great deal of trouble getting beyond. Wolff has trouble personifying Briggman’s increasing unease and paranoia as he slowly comes to realize what Deeks is capable of and what would likely happen to him if he decided to try and bring his heinous actions into the light of day for their military superiors to see. While I appreciated how hard the actor was trying to internalize this avalanche of psychological turmoil his character was dealing with, I never felt intimately connected with his trials and tribulations. His rocky desert journey headed towards horrifying tragedy came across as more of a clinical exercise than it did anything else, his performance creating an emotive hole that the actor never found a way to fill.

There’s still plenty to like about the film, and as I’ve already stated Skarsgård is magnificent as Deeks. Stéphane Fontaine’s cinematography (Jackie) is also excellent, as is Franklin Peterson’s (It’s a Disaster) dynamically controlled editing. I also found composer Zacarías M. de la Riva’s (Evolution) score to be incredibly strong, his music helping augment the sense of mesmeric foreboding tragedy I believe Krauss was attempting to create.

As great as all of that might be, I still never found The Kill Team to be as cohesive or as compelling as I kept hoping it would be. Not only does the movie come to a sudden conclusion that feels as if it came out of nowhere, I never felt like the ramifications of what happened to both Briggman’s unit and the U.S. military were being explored in meaningful detail. I admired a lot of what Krauss was attempting, and I certainly think his skills as a filmmaker are beyond reproach. But none of that means I also think his debut is essential, and even if this heinous historical event is worthy of exploration the director already did that back in 2013 with his stunning documentary. I can’t help but think people should just watch that instead. 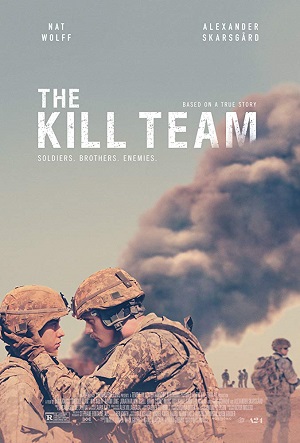