I did not like The King’s Man. Watching this prequel made me sick to my stomach. It was like being slapped in the face nonstop for 130 minutes. By the time the film was over I didn’t know whether to be sad for the talented cast and crew who made it or instead angrily hold them accountable for willfully torturing me with so much apparent elated abandon.

Director Matthew Vaughn once again returns to Miles Millar and Dave Gibbons’ comic book world, co-writing the script with Karl Gajdusek (Oblivion) for this third entry in his R-rated series. Instead of continuing the story begun in 2015’s Kingsman: The Secret Service and continued in 2017’s Kingsman: The Golden Circle, the pair retreat back to the start of WWI to tell a tale about the secretive international spy agency’s origins.

Haphazardly utilizing historical events, twisting them about willy-nilly to push the plot where they need it to go, Vaughn and Gajdusek concoct an inane scenario involving the birth of the Great War, Grigori Rasputin (Rhys Ifans), Mata Hari (Valerie Pachner), and the relationship between British King George, German Kaiser Wilhelm, and Russian Tsar Nicholas (all portrayed by a game Tom Hollander). At the center of the madness are Duke Orlando Oxford (Ralph Fiennes) and his gung-ho son Conrad (Harris Dickinson), the pair utilizing their cunning wit and lethal skills to aid their king and secretly help England push the United States into joining the war effort.

That’s a simplistic, streamlined version of events, but the plot is so obnoxiously convoluted that trying to recap this movie would take far more effort than I’m willing to give. It does not help that this smarmy, thuggishly oppressive tale grows increasingly off-putting as it goes along. It was almost as if Vaughn was going out of his way to commit acts of narrative atrocity so vulgar he was purposefully challenging people to keep watching. At certain points, part of me even began to wonder if he had total disdain for his audience, almost as if the director was playing them for fools and getting ecstatic enjoyment in doing so.

Pity, because the man sure as heck can construct and unleash a viscerally masterful action sequence when he sets his mind to it. There’s a run to safety through No Man’s Land that’s as technically marvelous as anything I’ve seen this year, while a goofily eccentric showdown between Duke Oxford, Conrad, and Rasputin is so lovingly staged and executed that the entire stunt team deserves a standing ovation.

Yet none of that matters. This is a loathsome exercise in excess and nihilism that grows increasingly odious. Characters are dispatched with such jovial abandon that their deaths are meaningless. There is nothing truthful about the emotions on display, no authenticity to any of the tears shed or the angry shouts of vengeful mourning that reverberate off the walls of the theater.

Worst of all, the moral to this saga has a disturbingly vile undercurrent I found inexcusable. There is an almost joyful fetishism for violence and fascism that would be hysterical if it were meant to be satirical. But it’s played so straight I cannot help but wonder if Vaughn means for audiences to take what he and Gajdusek are selling seriously. While I have trouble believing this to be the case, that is still how it came across, and intended or not that’s a turn of events I have no willingness to stomach at this particular time.

I kind of liked Kingsman: The Secret Service, even if I could still see the seeds being planted for something rather sickening if a sequel were ever to be made. My suspicions grew into reality with Kingsman: The Golden Circle, and even though there were facets of that second effort I felt worked quite well, mostly I found it a sadistically abusive disaster that I was all but certain had killed the franchise for good.

Well, if that one didn’t do it, I honestly don’t see how The King’s Man isn’t the final nail in this series’ cinematic coffin. While it saddens me that Fiennes will never have an action franchise to call his own, in which he gets to be the undisputed hero — whether it’s swordplay or fisticuffs, the actor makes for a suitably dashing do-gooder — I cannot see a way this prequel turns out to be a success. It’s an abhorrently unlikable misfire, and I truly hope I do not have to see its like again anytime soon. 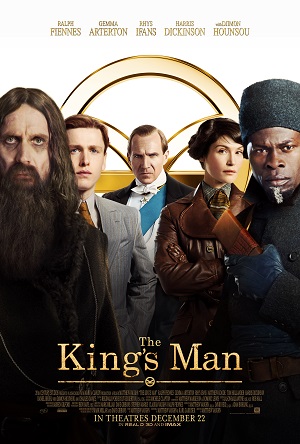