An Academy Award nominee for Best International Feature Film, director and co-writer Ladj Ly’s ambitious drama Les Misérables is not an adaptation of Victor Hugo’s classic 1862 novel. The filmmaker’s feature-length debut is inspired by the 2005 riots that shook France to its core. It is also set in the inner city, mostly immigrant and minority neighborhoods of Montfermeil and Clichy-sous-Bois, the same Paris locations where the character of Gavroche lived in Hugo’s novel. It is a movie that feels more like a French City of God (Cidade de Deus) more than it does anything else, the whole thing having a gritty, documentary-like aesthetic that held me spellbound.

Plainclothes police officer Stéphane (Damien Bonnard) is a newcomer to the Montfermeil anti-crime squad. He is assigned to the day shift and is paired with veterans Chris (Alexis Manenti) and Gwada (Djebril Zonga). During his first trip out he is introduced to local authority figure The Mayor (Steve Tientcheu) who attempts to keep control of the varying factions and gangs constantly angling for power. He also ends up in the middle of his first mystery, local youngster Issa (Issa Perica) kidnapping a lion cub from a traveling gypsy circus, a crime that could inadvertently spark a violent race riot unless the animal is returned unharmed.

It’s a simple enough plot, almost absurdly so. In lesser hands this would have transformed into some silly action-comedy. But Ly isn’t interested in delivering anything so crude or rudimentary. Instead, he’s examining wealth inequality, racism and the systemic social and political elements that keep primarily immigrant communities of color impoverished. It’s a day-in-the-life look-in that grows in powerful resonance as it moves along, things finally exploding into a symphony of violence and recrimination as the youth of an entire community scream in a singular voice that will no longer go unheard by the authorities determined to keep them suppressed and compliant.

Not that Ly is as successful as Fernando Meirelles and Kátia Lund were with City of God or, keeping things a bit more in the same region, as Mathieu Kassovitz was with his minimalistic 1995 marvel La Haine. The ending comes off as strangely toothless and flat, and while the Mayor’s introduction is masterful, from that point forward the character never makes the type of lasting impact I kept feeling like the material wanted him to. The various side characters, some of them observers, others unwilling and unexpected participants in the maelstrom that ends up ripping the community to shreds, are also rarely utilized to their full potential.

But the film still works, oftentimes marvelously so. Even if the framing device around which much of the plot depends upon recalls more standard action-thriller fair like Training Day (or even Dennis Hopper’s 1988 drama Colors of all things), the initial immersion into the daily ins and outs in Montfermeil is superb. The opening act is an incredible bit of world-building, and the way Ly shows the viewer what it is like to be both a resident and a law enforcement officer charged with attempting to keep the peace is exceedingly well done.

It’s better if I don’t go into any sort of detail as to the heinous events that spark all of the carnage, chaos and misfortune that take up the last hour or so of the film. Just know there are several hot-button elements at play, including a moment of inadvertent (or is it?) police brutality that sparks a neighborhood manhunt for a recording of the incident for their own selfish reasons numerous parties do not want aired on the nightly news.

Events slowly build to explosion, the ending purposefully open-ended with no one being in the right and almost everyone being in the wrong. It is also almost guaranteed to leave many in the audience scratching their head in dumbfounded confusion. This might not be Victor Hugo’s story, but that doesn’t mean Les Misérables doesn’t still bear the author’s imprint, the ending of this story a mixture of tragedy, compromise, disappointment and, yes, even hope that leaves many questions unanswered and the future for all involved painfully uncertain. 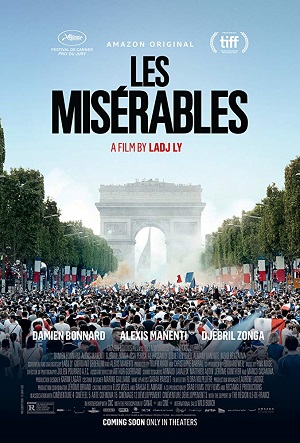