All Hail the King

And so the journey ends…

After three years, nearly ten hours, hundreds of millions of dollars and the fate of an entire studio resting on its fate, Peter Jackson brings his epic retelling of J.R.R. Tolkien’s The Lord of the Rings to a conclusion. Ultimately, if The Return of the King isn’t quite the thrilling conclusion we were all hoping for, it is still very much a rousingly successful culmination to what may be the most satisfying cinematic trilogy of all time.

Part three picks up right where The Two Towers ended. Heroes Aragorn (Viggo Mortensen), Legolas (Orlando Bloom), Gimli (John Rhys-Davies) and Gandalf (Ian McKellan) rest and discuss strategy with Rohan King Theoden (Bernard Hill) after their victory at Helm’s Deep. Reunited with Hobbits Pippin (Billy Boyd) and Merry (Dominic Monaghan) – justly celebrating the Ents running roughshod over the wizard Sauraman at Isengard – the compatriots are unsure of their next move, not wanting Sauron to turn his eye towards Gondor or discover the whereabouts of Sam (Sean Astin), Frodo (Elijah Wood) and the One Ring.

Unbeknownst to them, Frodo and Sam are successfully making their way into Mordor, but doing so under with Gollum (Andy Serkis) as their guide. The creature’s psyche has once again split in two, and unbeknownst to the Hobbits, he’s scheming to regain possession of the One Ring. He is leading them into Mordor by an ancient staircase guarded by a gigantic spider. Once dead, he’ll pick through Sam and Frodo’s bones until he finds his Precious.

Throwing much more of the plot out there doesn’t make a lot of sense. Anyone who has watched the first two films knows where act three in this epic adventure is heading: Frodo must take the One Ring deep into the Crack of Doom, Aragorn must push doubt aside and claim the throne of Gondor and men and orcs must engage in a massive battle where good hopes to triumph over evil. That pretty much sums it all up right there.

From a sheer spectacle standpoint, The Return of the King does not disappoint. I wasn’t sure Jackson could top the Helm’s Deep melee from The Two Towers, but I was wrong as far as that was concerned. The blood-soaked heroics on Gondor’s Pelennor Fields are stupendous. Monstrous catapults hurtle gigantic slabs of rock and wall back and forth, while legions of screaming Orc and Uruk-hai confidently march on the outnumbered, seemingly browbeaten human forces huddled together inside the White City.

Browbeaten, that is, until Theoden and his Rohirrim arrive, launching the most thrilling Calvary charge this side of the Light Brigade. Bobbing and weaving through the forces of Mordor, this battle is a Tolkien fanatic’s dream. Gigantic Oliphaunts – huge elephant-like pachyderms that carry themselves like carnivorous Wooly Mammoths – stomp across the plain, while Rohan’s riders dart underneath their feet like buzzing fighter jets. It’s spectacular.

As visually stunning as all of this may be, thankfully Jackson does not lose sight of the human element. Aragorn’s forceful confrontation with a ghostly monarch whose dishonorable past has condemned him and his army to a life of undead sorrow and Sam’s austere resolve when faced with Frodo’s failing strength at the base of Mount Doom are signature moments I’ll never forget.

Even better is Eowyn (Miranda Otto) and Merry’s brutal confrontation with the terrifying Nazgűl leader the Witch King. It’s a moment of triumphant perfection, the look of paralyzing fear mixed with stubborn determination on Otto’s face as her character stares down her unbeatable foe more than enough to rouse even the most jaded viewer to their feet to unleash a hearty cheer.

Even though I’m falling all over myself to justifiably praise Jackson’s movie, that does not mean I was as enraptured with this climactic entry in the series the same way I was while watching The Fellowship of the Ring and The Two Towers. As good as Mortensen, McKellan, Bloom and many of the other members of the outstanding cast are, their performances do not evolve all that much from what was established in the previous chapters in this tale.

There are exceptions, of course. Hill and David Wenham (returning as the steward of Gondor’s surviving son Faramir) elevate many of their scenes, adding depth to their big moments that deftly tugs at the heartstrings. Even better are Boyd and Monaghan, and for the first time in the trilogy, they are allowed to make Merry and Pippin into more than just R2D2/C3PO comic relief clones.

Then there are Astin and Wood. They have built Frodo and Sam subtly, with delicate nuance and upon a sturdy emotional foundation. Wood, thin and gangly, looking almost like a slithery larva trying to burrow its way deep into the wet earth, is heartbreaking. Astin is the yang to his costar’s yin. Sam overflows with a greater sense of purpose the more dangerous the road their walking on becomes. Astin gives everything he has to his performance, and if anyone in the talented ensemble deserves an Oscar nomination it would be him.

Much like Tolkien’s novel, Jackson and his creative team take their sweet time bringing this story to its end. I counted at least five instances where things could have satisfactorily concluded, the director fading to black only to slowly reopen the curtain to yet another epilogue. While all the fanatics are going to be happy seeing many of Tolkien’s endnotes make it into the picture, I equally cannot imagine that everyone in the theater will feel the same.

I’m nitpicking. New Line Studios bet their entire existence on Jackson succeeding and the filmmaker not only delivered, but he also produced a motion picture trilogy the likes of which in over a century of cinema we’ve frankly never seen before. It is impossible to imagine a studio will ever take such a risk again in my lifetime, and someday Jackson’s and The Lord of the Rings will be mentioned in the same breath as The Wizard of Oz, Lawrence of Arabia, The Seven Samurai and The Godfather as timeless spectacles worth celebrating.

Not bad for a guy primarily known for making low-budget New Zealand splatter films. Not bad at all.

actionadventureFantasyhorrorThe Lord of the Rings 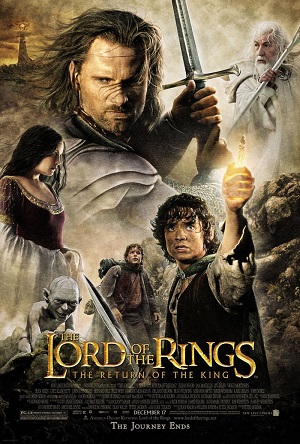