During the worst storm to hit the Pacific Northwest in decades, Orcas Island residents Lou (Allison Janney) and Hannah (Jurnee Smollett) are in the fight of their lives. The former is the latter’s cantankerous, monosyllabic landlord. But she’s also hiding something from the young single mother and her perpetually rambunctious daughter Vee (Ridley Ashe Bateman), and her truth might just save all three of them from almost certain death.

Lou can’t keep her secrets hidden after Philip (Logan Marshall-Green) — confirmed dead in an explosion by the US military months ago — appears like a ghost out of the rain and kidnaps Vee. He’s Hannah’s abusive ex-husband, a crack covert military operative who took too much of a liking to the torturing suspects and the slaughter of innocent civilians. Lou tracks Philip into the forest, and it turns out she’s got a particular set of skills that make her perfect for this type of mission.

Set during the mid-1980s, Lou is something of a female-driven Shoot to Kill meets Taken riff, only with Janney taking on the assignment of the retired or aging (or, in this case, hiding) elite government agent who is called back into service to protect the innocent. She is a former CIA field officer with information on what happened in Iran in January of 1979, and the government wants that intel back. Unsurprisingly, she also knows more about Hannah, Vee, and especially Philip than she wants to let on; the solution to that mystery becomes the major narrative device around which everything revolves.

There’s not much more to it. The screenplay by Maggie Cohn and Jack Stanley doesn’t go anywhere unexpected, with each character beat and plot reveal foregone from the first moment we’re introduced to Lou. Same again when we encounter Philip taking full advantage of an innocent Good Samaritan whose only mistake was to pick up a roadside stranger stranded in the rain. It’s clear who these people are and what ties them together, the only question being how it will all conclude when the truth is revealed and brought into the cold, rainy light of day.

Yet none of this matters if Janney, Smollett, and Marshall-Green weren’t up to the physical and emotional challenge of giving all of this absurd melodramatic silliness emotional weight. They are. The trio acquits themselves admirably, giving full-bodied performances that are consistently compelling, even during those moments when the script drifts shamelessly into treacle and schmaltz.

Janney is particularly strong, and while I won’t say I needed to see her channeling her inner Liam Neeson, now that I’ve done so, I’m quite glad this bit of absurd strangeness has miraculously happened. She brings Lou home, and if Janney decides to tackle more roles like this in the future, based on what she accomplishes in this spiffy, hard-boiled outdoor thriller, that’s perfectly okay by me. 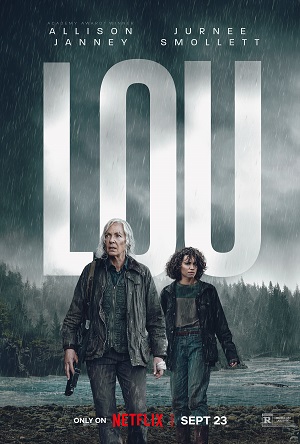