In a nondescript New Jersey beach town, teenagers Red (Alex Neustaedter), Alan (Keean Johnson) and Smitty (Daniel Zolghadri) raid the summer vacation houses of wealthy out-of-towners looking for valuables they can surreptitiously sell to local pawn shops. After Smitty breaks his ankle, Red convinces Alan to allow his quiet, intellectually introspective little brother Peter (Jaeden Martell) to join them as their lookout for what promises to be their final heist of the summer season.

Things do not go as planned. Sergeant Kent (Shea Whigham) curiously shows up just as the three of them are leaving for the beach to get back in their boat so they can escape back to the marina. Chaos ensues, and not every member of the trio ends up keeping from getting caught. What becomes obvious is that Red cannot be trusted, his violent mood swings and angry outburst far more dangerous than any of his wary friends realized. He’s certain someone squealed to Sergeant Kent, and when he learns who it was the lethal young man is ready to make them pay for speaking with the cops with their lives.

There’s more than that going on in filmmaker Kevin McMullin’s sparse, minimalistic debut Low Tide, including the discovery of a fortune in antique gold coins by Alan and Peter as well as potential romance for the older brother with the daughter of a wealthy vacationer, Mary (Kristine Froseth), who finds herself drawn to his unassuming charms. It all plays like a theatrical character study of a working class kids doing some pretty stupid things to pass the time, learning the repercussions of doing so are far more devastatingly long-lasting and tragic than they initially surmised they would be. The film has a hardscrabble lived-in quality that’s entirely genuine, the story set in a late 1980s, early 1990s world that is left purposefully vague yet still comes across as impeccably authentic.

It’s the rudimentary and somewhat ill-defined plot mechanics of McMullin’s script where I have a few issues. Red is menacing right from the start, his transformation into the story’s villainous heavy so forgone he never ends up as intimidating or as scary as I am sure was intended. Additionally, Neustaedter portrays him with such snarly pugnaciousness his efforts to make the guy frightening almost come off as a little unintentionally humorous. Because of this Red never captured my full attention, and even when the final standoff between him and his supposed friends commenced I still had trouble caring about the outcome of it all one way or another.

Even so, It and Midnight Special star Martell continues to impress, the young actor bringing a beguiling maturity to his performance that is fascinating. There’s always something going on behind Peter’s eyes, the wheels inside his head continually turning as he puts the pieces of this puzzle together and comes up with a plan that will allow them to not catch the eye of Sergeant Kent and at the same time keeps them out of Red’s lethal crosshairs. Johnson is also quite good, and I adored many of the scenes he and the beguiling Froseth shared together. The two have a heartbreaking moment where Alan realizes he must say the worst possible things to Mary to keep her off of Red’s radar, the painful selflessness of this act having emotionally crushing repercussions for both youngsters I’m not sure I anticipated.

McMullin also does a nice job setting a mood and sticking to it. As already stated, this small coastal town New Jersey aesthetic is always authentic. From the moment the film started I wholeheartedly believed in this world the boys, Sergeant Kent and all the other characters were living in, Chris Potter’s strong production design, Jessica Ray Harrison’s pleasingly understated costumes and Andrew Ellmaker’s soothingly somber cinematography going a heck of a long way to help with that. I also felt like the director had a firm handle on the best ways to ratchet up tension, his steady, unhurried pacing of the story close to perfect.

Even with my reservations, and even though I felt like things could have been developed a bit more fully and that Red wasn’t near as convincing a baddie as the material required for him to pack a memorably powerful wallop, all-in-all I still found plenty to like about what McMullin does here. Low Tide did just enough to keep me wanting to know what was going to happen next and to find out whether or not brothers Alan and Peter would be able to keep from drowning in the tumultuous sea of bad decisions they were swimming in. If not a great movie, it’s just good enough to make me curious to see what the filmmaker has up his sleeve next. More importantly, it helps make his thoughtfully meditative debut worthy of a look. 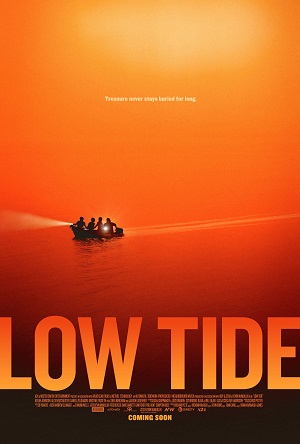