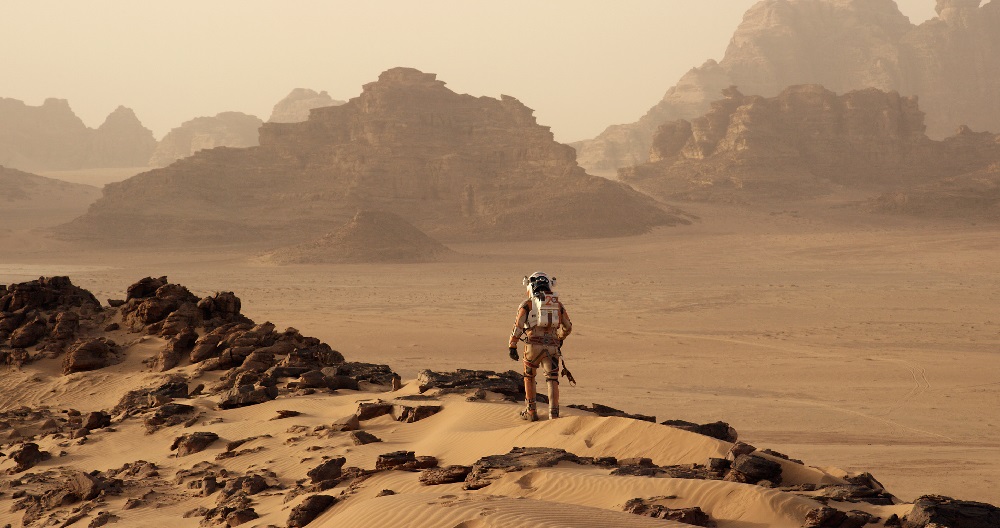 Damon Out of the World as Scott’s Heroic Martian

Botanist Mark Watney (Matt Damon) has been left behind on Mars. After a giant sandstorm sends him flying into what should have been certain death, Ares III Commander Melissa Lewis (Jessica Chastain) has no choice but to order the remainder of her crew to lift off without him. But he didn’t die, did not succumb to his injuries, and now he’s all alone, with very little food and even fewer options. Yet Mark Watney isn’t about to go down without a fight, and using the power of his intellect and whole lot of human ingenuity, he’s going to find  a way to survive on a supposedly dead planet where doing so is considered nothing less than a matter-of-fact impossibility. 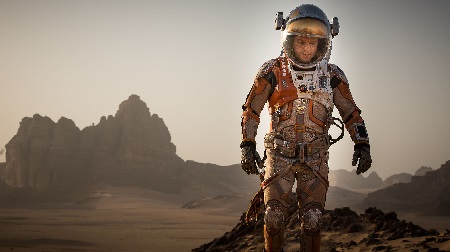 Based on the best-selling novel by Andy Weir, with a script by The Cabin in the Woods and Cloverfield scribe Drew Goddard, director Ridley Scott’s The Martian is a crowd-pleasing science fiction adventure survival story difficult to dislike. Filled with stellar visuals courtesy of cinematographer Dariusz Wolski (The Walk), production designer Arthur Max (The Counselor) and a passel of exceedingly talented special effects technicians, centered around a funny, personable and altogether human performance from Damon ranking as one of his all-time best, the movie’s 141 minutes breeze by in the blink of an eye, building to a confidently rousing finale that’s simply out of this world.

In the same breath, those expecting Scott’s latest to rise to the heights of the filmmaker’s best like Alien or Blade Runner, hoping it will be some splendid futuristic combination of Robert Zemeckis’ Castaway and Ron Howard’s Apollo 13, should by all accounts set their sights a tiny bit lower. This is a good film, one albeit littered with numerous terrific elements, yes, but still a solid, not to be scoffed at good film nonetheless, and while I’m perfectly fine with this particular outcome I’m sure there will be those out there who see this as some sort of disappointment.

Their loss. Scott’s effort has so many wonderful sequences, is just so gosh darn well made, I can’t for the life of me fathom how anyone could get their dander in a bunch crowing about how the darn thing isn’t perfect and as such is closer to failure than success. Let’s be perfectly honest, The Martian is one of the year’s most enjoyably creative efforts, and I for one have no issue with that one little bit.

The stuff dealing with Watney’s survival on Mars is sensational. Not only is Damon superb, but Goddard’s writing is correspondingly so, Scott’s subtle yet still imaginatively idiosyncratic touch augmenting both flawlessly. Watching the astronaut systematically plot out what it will take for him to theoretically survive and then proceeding to put two and two together (as well as the hard work) to see it happens glorious. Levity and pathos intermingle one with the other, pain and triumph oftentimes filling up equal corners of the frame as Watney does what’s necessary to see he earns another dawn.

That’s roughly 60-percent of the narrative. The remainder revolves around the actions at NASA, when they discover Watney is still alive, and also the reactions of the Ares III crew, when they learn they left their fellow crewmember alone back on Mars. Both facets of this secondary plot are good. Both of them have multiple merits. At the same time, both are so scattered, so split between so many locations and overflowing with a cacophony of supporting players (all of whom are important in coming up with a scenario that will lead to the lost astronaut’s rescue), that it ends up being frustratingly impossible to latch onto these segments with any real authority. At a certain point all of this stuff ends up being nothing more than pieces of a puzzle that all have to fit together in order to ensure success, everything coming together as required and very rarely anything more than that.

In some ways that’s the major rub. As mesmerizing as a lot of this is the film is still oddly lacking in tension. Even for those who have never read Weir’s source material, for the few who might enter into the theatre clueless as to what it is they are about to watch, there is still shockingly little question as to how Watney’s ordeal is going to turn out. Even Apollo 13, a movie based on fact where the outcome was known going in, had more chills, thrills and uncertainties than this entirely fictional endeavor does, an incontestably odd component to be certain. 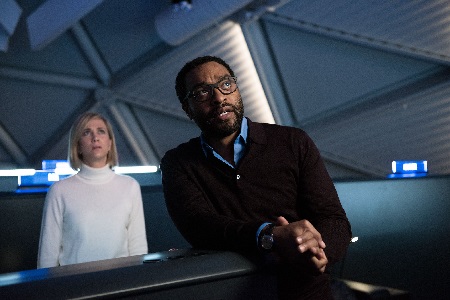 Even so, none of this is boring. More, as little time as they collectively have to make an impression many of the supporting players do just that. Chiwetel Ejiofor arguably fairs the best as the NASA scientist in charge of the Mars missions, Sean Bean a pitch-perfect counterpoint as the mission commander who wants to get his people traveling back from the Red Planet, stewing about leaving one of their own behind, and in on the rescue plans. Chastain, Michael Peña, Kate Mara, Sebastian Stan and Aksel Hennie are all wonderful as the Aries III astronauts, while Donald Glover waltzes into the action during the third act and steals nearly every second he has, portraying a NASA engineer whose crazily eccentric ideas might just be what everyone is looking for in regards to getting Watney back home safe and sound.

Goddard’s script is a light and nimble thing, making the scientific complexities found in Weir’s book exceedingly easy to comprehend and latch onto. More than that, he finds a significant amount of humor in the tale, understanding that drama, tragedy and pain more often than not walk hand-in-hand with the most fervently profound types of laughter. The screenplay also remains innately true to these men and women striving to do what they can to save Watney, and while some will find their unflagging positivity and resilience slightly odd, the reality of this kind of mindset isn’t as atypical as might initially appear. Granted, in this way maybe it helps to come from a military family and to know how those who have served react when the possibility of leaving one of their own behind confronts them, nothing else mattering save making sure this isn’t the case.

Scott’s actually explored that theme not too long ago, his excruciatingly tense military 2001 polemic Black Hawk Down a more kinetic, full-throttle chronicling of a handful of similar ideas. But where that movie was a minute, aggressive, decidedly dour point-by-point reenactment of heroism in the face of tragedy, The Martian arrives at a similar destination, yet does so with more humor and warmth, never dwelling on anything pessimistic or cynical, instead keeping a positive attitude throughout no matter how dire the situations facing Watney end up proving to be. On that front the movie does in fact end up being an interstellar achievement, and I find it highly likely audiences en masse all over the globe are going to feel the same. 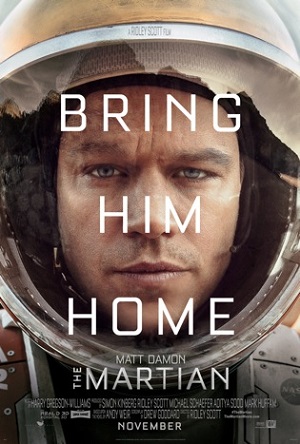