Paul Thomas Anderson’s The Master isn’t an easy sit. Its themes are all over the map, and what it’s talking about is purposefully vague. Most notably, it’s never a certainty whose story it is telling, three primary characters all competing for screen time with two of them sharing numerous tête-à-têtes while the other is in roughly 90-percent of the scenes. All at one point or another becomes the key figure who drives the narrative forward. In other words, this is one singularly challenging motion picture.

Here’s hoping viewers decide to take a chance on this one as The Master is one of the most thought-provoking, gloriously acted and meticulously composed films I’ve seen this year. Anderson’s latest is a psychological whirligig leaping from idea to idea and thought to thought with wildly invigorated abandon. The filmmaker never misses a beat and there’s nary a step out of place, all his work in the diligent pursuit of presenting a scenario that’s as tough-mindedly concrete as it is obliquely ephemeral.

A psychologically scarred WWII vet named Freddie Quell (Joaquin Phoenix) has a penchant for self-destruction and a talent for transforming the most noxious of liquids, like gasoline or paint thinner, into strongly pungent alcoholic blends which produce instantaneous intoxication. By chance or by fate, he comes across Lancaster Dodd (Philip Seymour Hoffman) and his latest wife Peggy (Amy Adams). The man runs around the country with his family in tow extolling the virtues of his book “The Cause,” a belief system he’s created that analyzes past experiences and lives, supposedly helping those who follow its instructions take total control of their lives.

Why does Lancaster take Freddie in? What does he see in him that makes him want to bring the man into the Dodd family fold? Is he nothing more than a lost puppy the charismatic Lancaster, who some believe is a dangerous charlatan, can control as if he were a toy to be played with? Or is he a fellow comrade, a potential fellow leader who can help The Cause enter the mainstream which in turn will increase the group’s cult of followers?

The Master does not answer, at least not fully, any of these or the numerous additional questions Anderson presents for audiences to mull over. Thing is, he doesn’t need to answer them. In this case it is the debate that matters and the discussions generated by them afterward, how people converse with one another the focal point around which everything craftily revolves.

I don’t believe Anderson is that interested in religion or cults or with psychological scars, that he isn’t enamored with how leaders bring followers into their fold or how supporters manipulate events to make their beliefs more tactile even when all evidence points to the contrary. Instead, I think he wants emphasize on the discourse itself, showcasing how people tackle differing opinions, especially when they’d rather not hear them in the first place.

Anderson’s film is about the state of interpersonal communication as it exists right now. At least, that’s what I think it is about, what is at the forefront of the director’s mind. Events throughout the picture showcase the different styles each character uses to get their respective points of view across, the way conversation and thought are manipulated to mirror a predetermined point-of-view or support ludicrous bursts of nonsensical propaganda the central focus.

I could be wrong, and like all great cinema The Master requires multiple views. But for me, many of the conversations taking place between Dodd, his wife, Quell and with so many others, both followers of The Cause and with those who stand against it, all signify Anderson’s belief as to how modern forms debate have failed us. The setting may be post-WWII but how people react to one another and embrace their strongly held opinions even when all evidence shows them to be false could easily be those showcased on Cable news programs on a nightly basis. What begins as intelligent reasoning quickly morphs into angry recrimination, understanding and compromise impossible to come by when otherwise rational people become feral nincompoops impossible to talk to.

Phoenix is outstanding. This is the kind of titanic, superhuman performance that defies any sort of pigeonholing or easy descriptions. He doesn’t care if the audience likes Freddie, doesn’t give a crap if they relate to him. He digs into corners of the man’s recesses that are mesmerizing in their uncomforting dexterity, the man’s entire aura moving in a calamitous direction that’s impossible to predict. The emotions Phoenix mines, the places he allows himself to go, all of it is a freewheeling journey into focused madness that’s insidiously hypnotic.

Hoffman and Adams equal him, all three immediate Oscar frontrunners deserving of taking home the gold. But what these two accomplish, the balance of what they are attempting to convey, all of it runs in fascinating contradiction to Phoenix’s high-wire act. All three dazzle in their own unique, idiosyncratic way, each providing a crucial ingredient to the finished meal that wouldn’t taste nearly as scrumptious without their addition to the stewpot.

With Boogie Nights, Magnolia, Punch-Drunk Love and especially There Will Be Blood, Anderson has already shown himself to be a singular directorial talent. His attention to detail, his handling of all the technical aspects including cinematographer, production design, music and editing, is simply extraordinary. As bewildering and as perplexing as the meaning behind his latest tale might be, the sense of control, the feeling that not a single facet of this production is not exactly what Anderson intends it to be is never in doubt, not for a single solitary second.

The Master won’t be for everyone. I can’t say all who see it will wander out of the theatre feeling a sense of euphoria or exhilaration. But that doesn’t make the film any less spectacular or less essential. Anderson’s opus is easily his most challenging offering as of yet, the food for thought it puts on the table a sumptuous banquet any cinephile worth their salt owes it to themselves to devour. 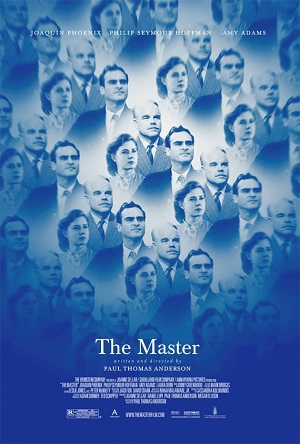