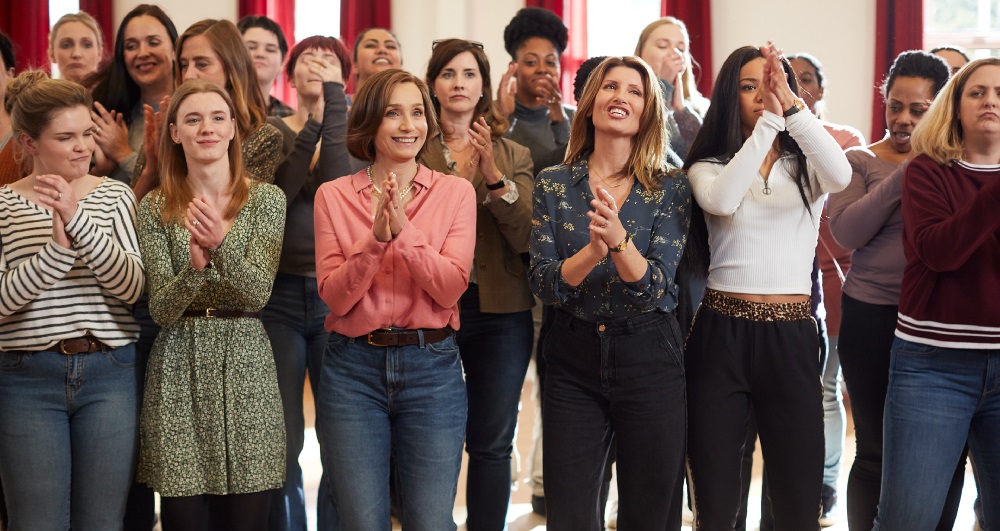 Maybe it’s the self-isolation. Maybe having my spirits lifted for just under two hours is just what I needed. Maybe I just adore Kristin Scott Thomas, and watching her eviscerate a role with delectable relish brings a smile to my face. No matter what the reason, Cattaneo’s latest was a balm for my soul, injecting a dollop of joy into my heart while a happy tear or two ran down the side of my cheek. I liked this movie, and I’m happy to sing its praises as vociferously as I can.

The soldiers stationed at Flitcroft military base have left for Afghanistan. While they are away on active duty, their wives and families back in England are attempting to go about their lives as close to usual as they can. Lisa (Sharon Horgan), the new chair of the base’s Social Committee, is under pressure from Kate (Thomas), the wife of the company commander and who is still quietly reeling from the loss of her son during his last deployment, to come up with a long list of activities for the women to take part in. They do not see eye-to-eye, and the chances they’ll successfully be able to work together to keep base morale positive lies precariously between slim and none.

The idea of forming a Flitcroft choir is floated, and even if they don’t agree on what sort of music the ladies should sing, the best way to practice or who they’ll all be preparing themselves to perform for, both Lisa and Kate do think this is a pretty good idea. What they could never have anticipated was just how fully their fellow wives would invest themselves in this endeavor. Inadvertently, the choir ends up catching the ear of an eavesdropping high-ranking general, and he in turn snags them an invite to perform at an annual televised star-studded concert for the military at London’s renowned Royal Albert Hall.

The rest is pretty rudimentary. Lisa and Kate butt heads. The base’s best singer is a shy introvert battling a crippling case of stage fright. The choir’s first public performance is a bona fide disaster. An overseas tragedy will affect group cohesion. None of this is unexpected. There are no unanticipated narrative bombshells. Everything happens exactly as I imagined it was going to before I sat down to watch the film. It’s as straightforward as it all sounds, and anyone expecting anything otherwise will undoubtedly be disappointed.

But not me. Cattaneo directs with confident authority. Tunnard and Flynn’s script is smart, character-driven and honest. The entire cast is aces, especially Thomas, while Horgan shares a couple of scenes with India Ria Amarteifio, who portrays her rebellious teen daughter, that border on outstanding. The film’s key original song, “Home Thoughts From Abroad,” written by Guy Chambers and Robbie Williams, is a heart-stopping stunner. This helps make the choir’s Royal Albert Hall performance a show-stopping sensation that brought tears to my eyes, Cattaneo keeping his focus on the women as a singular familial group during this triumphant climactic moment.

There’s not a lot more to add. Hubert Taczanowski’s (How to Build a Girl) cinematography is colorfully vibrant, while Lorne Balfe’s (Bad Boys for Life) richly multifaceted score augments the on-screen action beautifully. Mostly, Military Wives is a feel-good melodrama that lives up to its genre descriptor. While the film likely won’t have the timeless staying power of Cattaneo’s Oscar-winning The Full Monty, that doesn’t make it any less wonderful, and all things considered this was one musical performance I’m overjoyed that I took the time to attend. 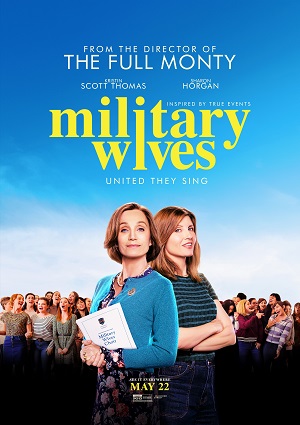