The last time June (Storm Reid) saw her mother Grace (Nia Long) she was getting into an Uber to go to the airport with her boyfriend Kevin (Ken Leung) for a romantic vacation in Colombia. The teen was supposed to pick them up at the airport on their return, but neither made their flight, and June is understandably frantic as she wonders what the heck has happened.

The US consulate in Colombia assures June that they’re working with local law enforcement to find her mom. Grace’s trusted confidant and lawyer Heather (Amy Landecker) is also on the case, stating she is going to clear her calendar and make figuring out what happened her top priority. June’s best friend Veena (Megan Suri) comes over every day to provide moral support.

But June isn’t one to sit and do nothing. With the whole world now online, cameras recording everything, and gig economy workers ready to do almost anything for a nominal fee at the click of a mouse or the swipe of a finger, this daughter is determined to find her mother no matter what obstacles are thrown in her way.

Not so much a sequel to 2018’s Searching as it is another tale of online moxie and resolve set in the same universe, Missing is a tensely enjoyable roller-coaster ride that had my eyes glued to the screen. Once again told entirely through laptop webcams, security cameras, smartphones, and other high-tech devices, much like its predecessor, this is a character-driven mystery that treats the audience with intelligence and respect. It’s also a lot of fun.

Searching filmmakers Sev Ohanian and Aneesh Chaganty have returned to craft this original story, while that film’s editors Nicholas D. Johnson and Will Merrick share the director’s chair in this installment and also get credited for writing the cyberthriller’s screenplay. While this new mystery is a tad more implausible, I do like that the creative team has stuck to their guns about populating this madness with a complicated hero who always feels authentic, no matter how silly everything turns out to be.

What do I mean? June is a boringly real 18-year-old trying to bust out of her parent’s shadow. She doesn’t empty her voicemail. She responds to “I love you” with a thumbs-up emoji. She makes plans to hold a house party while her mother’s in Colombia. She goes out of her way to treat Kevin with disdain, thinking that if she remains distant and aloof, maybe he’ll have second thoughts about Grace.

The filmmakers drop astute hints as to why June feels like her mother is smothering her yet also is angered and somewhat saddened to see her falling in love with someone other than her late father. The tragic backstory there is cleverly handled. It’s easy to see why, even if much of it transpired when June was a toddler, it would still weigh heavily on her psyche.

Reid delivers a beautifully astute performance, made all the more impressive considering the way her story is shot and edited. There are layers upon layers upon layers to the visuals, with computer and smartphone screens competing for attention, frequently at the same time. Reid has to craft a believable character without the aid of traditional cinematic storytelling techniques. For anyone who has watched her career evolve in films like A Wrinkle in Time and The Invisible Man, this likely will not be shocking, not that it makes the confidently naturalistic ease with which she does this any less impressive.

I did feel that the resolution to the mystery at the heart of Missing was slightly more obvious than it was in Searching. Additionally, while I’ll always celebrate any picture that gives the wonderful Joaquim de Almeida a key role, and even though the veteran character actor gives a terrific performance, the subplot he’s involved in — which I am not going to reveal — isn’t as seamlessly integrated as I hoped. If it works at all, it is only because de Almeida and Reid are so good, and not because the script successfully develops the connection between their characters in a lasting or meaningful way.

Not that I’m complaining. Searching worked even with an equally absurd premise, and this is also the case with Missing. As loopy as things get, I cared about June, and I couldn’t help but become intimately involved in her search for Grace. I was on the edge of my seat, and that says it all. 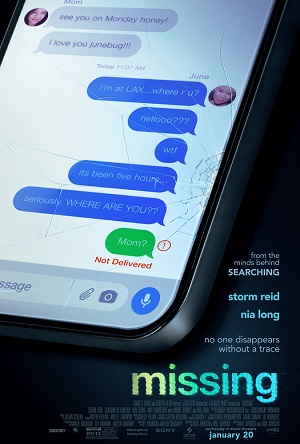