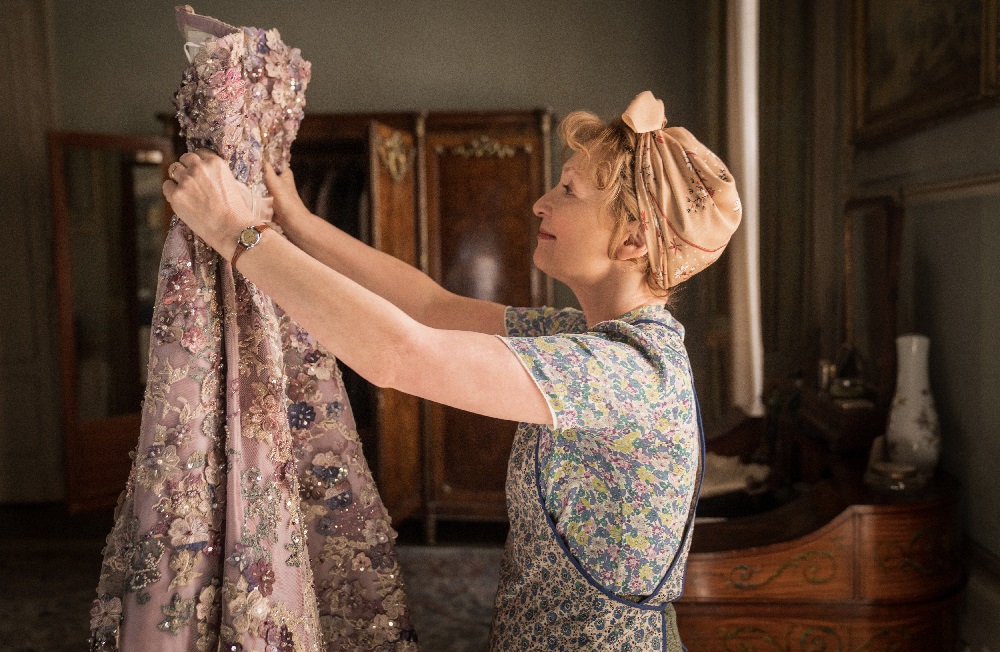 Few films from the past few years have given me as much continuous pleasure as Mrs. Harris Goes to Paris. Due in large part to star Lesley Manville’s tremendous performance, this fanciful drama managed to plant an immediate smile on my face, brought heartfelt tears to my eyes, and filled me with so much joy I almost wanted to bottle it up and save some for later. To put it even more bluntly, I loved this one. A lot.

Mrs. Ada Harris (Manville) is a London housekeeper who works for a variety of well-to-do clients. It is the early 1950s and England is still recovering from WWII. Mrs. Harris still holds out hope that her husband, an RAF pilot listed as missing since the early days of the war, will one day come home to her. But when his remains are finally found and his death is confirmed, she is understandably shaken, deciding in that moment she’ll stop going through life in neutral and instead live out her dreams, no matter how silly they may appear to be.

And what does Mrs. Harris want? A haute couture gown. Specifically, she would like one designed by Christian Dior (Philippe Bertin) himself, and with 500 pounds in her purse, Mrs. Harris intends to travel to Paris and buy one straight off of the runway if she has to.

Based on the novel by Paul Gallico and with a screenplay crafted by four writers including director Anthony Fabian (Skin), it’s not like Mrs. Harris Goes to Paris breaks the mold or goes anywhere that isn’t a forgone conclusion. But it’s the journey that proves to be wonderful. Mrs. Harris’ simple quest touches several lives, connecting people in ways they did not anticipate.

This mad idea of owning a Dior gown eases the housekeeper’s pain as well, giving her the freedom to grieve and the confidence to move on with her life. Mrs. Harris learns that it is okay to make new connections and to open her heart to the prospect of love. She discovers there is power in saying no and that selfless acts of kindness provoke unexpected repercussions.

The simplicity of the storytelling is impressive. The talented ensemble includes Isabelle Huppert, Jason Isaacs, Ellen Thomas, Alba Baptista, Lucas Bravo, Roxane Duran, Rose Williams, Anna Chancellor, and Lambert Wilson. Each has a specific part to play, and almost all are given at least one scene to make a lasting impression.

Huppert is the one who ends up making the absolute most out of the very least, playing Claudine Colbert, the exacting head of the House of Dior. Colbert initially sees Mrs. Harris as a threat, while her employees immediately warm to the newcomer. Colbert slowly comes to feel the same as her staff, but this evolution is never fully convincing, and it is only due to the international icon’s considerable star power that Huppert gives this one-dimensional woman three-dimensional life.

As complaints go, this one, thankfully, is relatively minor. Manville’s scenes with Wilson, a smitten French marquis who makes Mrs. Harris his guest at an exclusive Dior showcase, are sensational, each moment they share revealing facets of the human condition that ring heartbreakingly true. Even better are her scenes with Baptista. She portrays the angelic face of Dior, Natasha Petitpierre, a runway model who’d rather be getting a master’s degree in philosophy. Her relationship with Mrs. Harris allows Natasha to find the strength to challenge societal expectations as she never has before.

But the film belongs to Manville. Whether she’s trading pleasantries with Thomas or verbally dancing with Issacs, there was never a moment when I wasn’t completely under the actor’s enthralling spell. Manville disappears entirely into Mrs. Harris, her performance a thing of continual beauty. Her smile lights up a room. Her goodness is infectious. Manville elevates the material every step of the way, making Mrs. Harris Goes to Paris a fashionable showstopper that brings down the house. 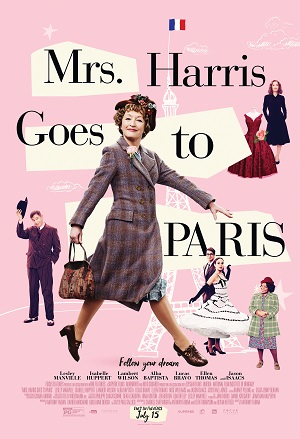