There’s not much of One Hundred and One Dalmatians author Dodie Smith’s source material or its classic 1961 animated adaptation to be found inside Disney’s Cruella, and I’m perfectly okay with that. Transplanted to a punk rock London of the 1970s, this isn’t so much an origin story for the iconic fashionista villainous with a murderous thing for spotted puppy fur as it is an alternate reality where a similar character takes her first stiletto-heeled steps into her own fabulously coifed tomorrow.

Directed by I, Tonya and Lars and the Real Girl filmmaker Craig Gillespie and with a story and script credited to five writers (including The Favourite scribe Tony McNamara and The Devil Wears Prada screenwriter Aline Brosh McKenna), the finished product can feel a bit messy, especially during its convoluted second act. But the opening hour is dazzling, while the climax is a crackerjack barnburner of suitably cartoonish rage and whimsically rambunctious adrenaline. The film is a heck of a lot of fun, and even at 134-minutes it still managed to keep my full attention for the most of its epic running time.

Estella (Emma Stone) is a twenty-something orphan living on the London streets with her two best friends and partners in pickpocket crime Jasper (Joel Fry) and Horace (Paul Walter Hauser). The young woman has talent as a seamstress and fashion designer, and she harbors dreams of going to work for the legendary Baroness von Hellman (Emma Thompson).

When the opportunity to do so arises seemingly by chance, after earning the Baroness’ trust and becoming a valuable member of her design team, Estella is shocked to discover her icon harbors a devasting homicidal secret directly connected to the tragic death of her mother roughly a decade prior. Determined to exact revenge, she develops a colorfully aggressive alter ego named “Cruella,” a rival up-and-coming designer who wants to dethrone the fashion industry’s reigning queen.

It’s not a ton of plot, and as elaborate as the scenario gets, there still isn’t a valid reason for this story to be stretched out to well over two hours. But that opening section is incredible. There is a passionate female-centered strength to the world Gillespie has created that’s exceptional, and the ways he allows Stone so much freedom to make Estella/Cruella her own cannot be understated. The fusion between actor and character is seamless, and I loved the underlying emotional ferocity which hypnotically fuels her performance.

As terrific as Stone is, however, Thompson comes remarkably close to stealing the motion picture right out from underneath her co-star. The Baroness is a magnificent villain, her venal self-righteous narcissism beyond anything I could have imagined. Thompson brings a level of sanctimonious sincerity to the proceedings that’s sublime, her lithe, almost serpentine physicality adding an additional layer I found impossible to resist.

There is a point where things begin to stumble and fall apart. The seams start to show, and Gillespie has to rely on a few well-placed needle drops to help keep narrative momentum moving forward at a spirited clip. This is a bit lazy in my opinion, and I do wish he’d have allowed Nicholas Britell’s (Moonlight) fabulous score to do more of the musical heavy-lifting instead of turning to the likes of The Rolling Stones, Ike & Tina Turner, The Clash, The J. Geils Band, Judy Garland, Blondie, Queen and many others for a far-too-obvious assist.

Other areas I could pick a few nits include how Jasper and Horace are sidelined during the laborious middle section and the almost inexcusable way in which Anita Darling (Kirby Howell-Baptiste) is utilized as a prop and not a full-blown character. There’s also a vital subplot involving The Baroness’ trusted valet John (Mark Strong) which is far too contrived to satisfy, and I may have rolled my eyes during a pivotal reveal involving the character’s connection to Estella.

These annoyances are moderately mitigated in large part courtesy of the charming performances of the actors, Fry and Hauser particularly outstanding. There is also the bravura work turned in by costume designer Jenny Beavan (Mad Max: Fury Road), her spectacular collection of frocks, business suits, punk jackets and casual wear arguably the film’s third most important character behind Estella and The Baroness.

Thankfully the climax truly is wondrous, Gillespie recapturing the riotous, anything goes mania of that opening hour with stupendous aplomb. Cruella roars back to life with thunderous intensity, delivering a crowd-pleasing ending that had me wanting to rise out of my seat to cheer. I had a blast, and much like 2015’s Cinderella and 2016’s Pete’s Dragon, this is one Disney live-action remake worth getting excited about. 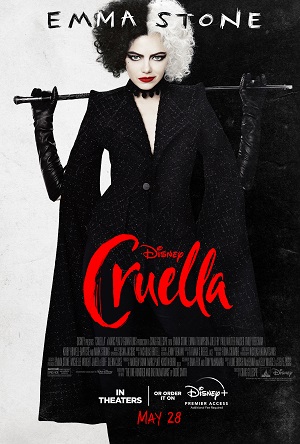