Night Teeth is Collateral with fangs by way of Stephenie Meyer and, surprisingly enough, I don’t mean any of that as a negative. Written by Brent Dillon and directed by Adam Randall, as slight as this one-night-driving-vampires-around-L.A. thriller might be, when taken on its own cartoonishly minimalistic terms, this bit of bloodsucking nonsense is actually quite charming.

In need of some quick cash, Benny (Jorge Lendeborg Jr.) convinces his older brother Jay (Raúl Castillo) to let him take his overnight shift as a chauffeur. Picking up a pair of gorgeous Beverly Hills socialites, Zoe (Lucy Fry) and Blair (Debby Ryan), the young college student embarks on what he initially believes will be an evening to remember.

Benny’s right about that, but not in the way he thinks. Zoe and Blair are vampires working for the power-hungry Victor (Alfie Allen). The duo aren’t hitting a quintet of overnight parties, they’re instead engaged in a carefully constructed plan of murderous mayhem designed to change the undead pecking order in Los Angeles forever. Benny unintentionally finds himself smackdab in the middle of a war he never even knew existed, and before the night is over his decisions will likely end up determining the outcome.

Dillon’s script doesn’t venture too far beyond the unexpected, and while Randall’s handling of the material is suitably playful, I equally can’t say his direction is particularly innovative. The filmmakers appear to be content to keep things inside the box and, if anything, the majority of my nitpicks have to do with how perfunctory so much of the storytelling frustratingly proves to be.

Another key issue is how key members of the supporting cast are utilized. But that’s an expectation problem on my part, almost entirely based on my foolishly allowing myself to be caught up in the marketing in ways I’m usually able to avoid. Still, Megan Fox and Sydney Sweeney are barely in this thing, the two showing up for all of one scene as a pair of sexy, uber-powerful vampires who by all appearance have spent centuries happily entangled in one another’s arms. It’s a waste of two extremely interesting characters, and their appearance happens so early I honestly spent the rest of the film wondering if they were going to return.

As dire as all of that sounds, I still enjoyed Night Teeth. Allen is malevolently frisky as Victor, while Lendeborg and Ryan have strong chemistry that only grows as the picture progresses. I also liked the way Dillon and Randall so deftly set forth the rules of their story’s mythology, and with so many moving parts and competing players getting involved in Benny, Zoe and Blair’s overnight L.A. road trip, the fact it is very easy to keep track of who is who and what it is they want is no small thing.

Best of all is Fry. She turns in a deliciously devilish performance as Zoe. Her vampire has seen it all, and she’s all for shaking up the status quo for Victor. But she’s also intimately connected to the younger Blair, and Fry does a splendid job showcasing her character’s fracturing emotions as she watches her fellow vampire grow oddly close and more sentimentally attached to Benny the closer the trio gets to their final destination. It’s a beguiling balancing act, one oozing in menace yet also is a performance that showcases a subtly captivating humanity, all of which makes Zoe a fascinating bloodsucker whose innate villainy and unexpected heroism assertively walk hand in hand.

I’d have preferred a surprise or two, and the only reason the climax worked as well as it did for me was in large part due to how fond I’d grown of Benny and Blair. I justifiably loathed Victor, so much so I eagerly anticipated seeing how a stake would be driven through the heart of his plans for the Los Angeles vampiric underworld. Night Teeth might not bare sharp choppers, but they are still pointed enough to draw a little blood, and in this case that’s more than enough to entertain. 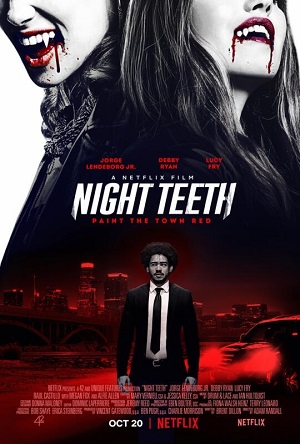