Loopy Once Upon a Time an Emotionally Frustrating Hollywood Fairy Tale

Former 1950s TV Western star Rick Dalton (Leonardo DiCaprio) is going through a rough patch. It is February of 1969 and times have changed. As it has recently been pointed out to him by producer Marvin Schwarzs (Al Pacino), all of his guest appearances as a villain in a string of shows like “The F.B.I.” have diminished his star appeal, and if he doesn’t shift gears soon his days as an above-the-title star will be over. The demonstrative movie mogul wants Rick and his stunt man/chauffeur/handyman best friend Cliff Booth (Brad Pitt) to head to Europe for six months and headline an Italian Spaghetti Western, stating that this could be just the jumpstart the actor needs to regain his heroic box office mojo.

That’s not really the story Quentin Tarantino is telling with his ninth effort Once Upon a Time…in Hollywood, but it is the one facet of his sprawling, episodic drama that’s easiest to describe. At its heart, this movie an elegiac character study of two forty-something friends who are both doing their best to stay true to one another while also attempting to change with the times. They embrace certain aspects of the new cultural status quo while other facets they look upon with nothing less than obliquely bemused disdain. It’s their surreal journey through this morass of alcoholism, auteurism, drug abuse, sexuality, psychological manipulation and depression, everything culminating in a violent outburst of aggression that lays demons to rest as this very adult fairy tale ties all of its various plot strands and thematic meanderings together with fiery conviction.

It’s fascinating stuff, especially early on, and I got the feeling this was Tarantino’s most personal script in quite some time, maybe ever. It was hard for me to feel like he wasn’t seeing himself as some sort of combination of his two leading men, that both Rick Dalton and Cliff Booth were speaking for him. There is an observational intimacy to their adventures that’s frequently riveting, each of them heading out on divergent journeys of self-discovery that allow them to look at their lives differently by the time events reach their blood-splattered climax.

Yet I cannot say all of this works particularly well. There are decidedly uncomforting aspects of the movie that hit me as being distasteful in ways that were far south of palatable. Tarantino begins things just at the point Sharon Tate (Margot Robbie) has moved into Rick’s neighborhood with her new husband, Rosemary’s Baby director Roman Polanski. A hefty portion of the running time is devoted to watching her run around Los Angeles. Getting a first edition of a novel as a present for her husband. Going to a party at the Playboy Mansion. Heading to the theatre to clandestinely watch one of her first films, 1968’s Matt Helm spy comedy The Wrecking Crew with Dean Martin. Tate is a breathlessly enchanting enigma floating through this absurd little world without seemingly a single solitary care, an ocean of endless possibility metaphorically crashing right up against her front door as the young actress begins to navigate the calm seas of her career’s successful early days.

This subplot is juxtaposed against Cliff becoming enchanted with a beguiling hippie nicknamed Pussycat (Margaret Qualley) who claims to live at George Spahn’s (Bruce Dern) movie ranch, a once busy shooting location that now sits rundown and seldom utilized what with the Western appearing to be going out of style. There’s something noticeably cult-like about the group of apparent transients the teenager is living with, and her obsession with their absent leader “Charlie” understandably creeps Cliff out a significant bit.

For a story that feels like a stylized combination of Federico Fellini’s 1963 classic 8½ and Paul Thomas Anderson’s 2014 adaptation of Thomas Pynchon’s Inherent Vice, I honestly can’t say I totally get what Tarantino was going for by including the Sharon Tate subplot, especially as I just as freely state I wasn’t shocked at all the way in which the Inglourious Basterds and Pulp Fiction filmmaker put his own idiosyncratic spin on her tragedy. But how he does it just didn’t work for me. I found there to be a layer of sadism, misogyny and sexism that I could not get beyond, the level of repellent ultra-violence in my opinion not fitting the story in the same way it has in just about all of the director’s previous motion pictures (even The Hateful Eight, which I’m admittedly not a big fan of).

Even with all of that being the case, I’m still hesitant to call Tarantino’s latest a misfire. The ambiance is incredible, Robert Richardson’s (Django Unchained) masterful cinematography having an absorbingly naturalistic glow that continually drew me in. The same can be said for Barbara Ling’s (Fried Green Tomatoes) immaculate production design and Arianne Phillips’ (Nocturnal Animals) richly creative costumes. The director’s use of music is as magnificent as ever, while the film’s subtly impressive visual effects are so seamlessly integrated into the story they’re practically invisible.

Then there are DiCaprio and Pitt. They are outstanding. I can’t think of a better word to describe either of them. The depiction of their friendship is one of the best of its type I’ve seen in ages. It’s pure. It’s genuine. It has ups and downs. Best of all, they genuinely care about one another, and even if they don’t always know the right thing to do or the correct thing to say, they’re both still ready to assist the other no matter what the situation. Both actors mine emotive terrain that is absorbingly complex, their collective fearlessness a thing of immersive beauty.

But these two dynamic performances unfortunately do not a fully entertaining movie make. While I could watch Rick and Cliff meander and struggle and persevere and party until the cows come home, I still need more of a personal emotional investment in the proceedings for any of what they do to intimately resonate. Couple that with the film’s strange, almost callous disdain for its female characters and its overtly casual misogyny, the longer this episodic trip into the bizarre went on the less I cared to keep paying attention to anything it had to say. By the time Tarantino played fast and loose with history and ramped up his masculine Los Angeles fairy tale to bloodily gruesome new heights, Once Upon a Time…in Hollywood had pretty much lost me, and I suddenly realized this was one bit of loopy pulp fiction I could have done without. 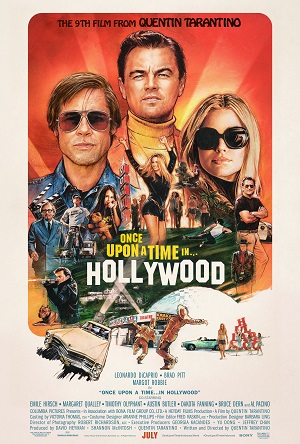